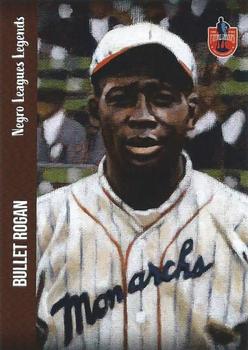 The crowd – estimated at 20,000 by the Kansas City Sun – packed the stands on August 1, 1920, and spilled onto the playing field of Kansas City’s Association Park. Fans had flocked to the ballpark to witness the hometown Kansas City Monarchs and their new pitching sensation, Bullet Rogan,1 challenge Rube Foster’s Chicago American Giants – the Negro National League’s premier team in the league’s inaugural season.

Those who came to the game did not leave disappointed. Rogan struck out 13 American Giants and drove in a 12th-inning run to deliver a 5-4 Kansas City win.

Rogan was not on Kansas City’s roster when its season got underway in May. He was in the US Army playing baseball for the 25th Infantry Regiment team near Nogales, Arizona.

Rogan was something of a mystery to Monarchs fans when he joined the team. Even though he spent his boyhood in Kansas City, Kansas, he had dropped out of school in 1911 to join the Army at age 17, and he had built his baseball reputation far from home. But Rogan’s skills as a ballplayer were well known to Monarchs owner J.L. Wilkinson, who had witnessed them firsthand.

In the spring of 1917 Rogan had returned to Kansas City while on furlough from the Army, and played about a dozen games for the Kansas City (Kansas) Giants and Wilkinson’s All-Nations team.2 Wilkinson was impressed. When he began assembling a team late in 1919 that became the Monarchs, he offered employment to Rogan, shortstop Walter “Dobie” Moore, and other members of the 25th Infantry team.3

Rogan mustered out of the Army and reported to the Monarchs in Chicago just in time to pitch against the American Giants on July 5. It was a stunning debut. The 26-year-old Rogan held Chicago to one hit, struck out 11, and won his first game as a professional, 4-2. The next day – playing right field – Rogan collected his first two NNL hits.

Rogan followed up his pitching performance in Chicago with road wins over the Detroit Stars and the Indianapolis ABCs, bringing his NNL record to 3-0. When the Monarchs returned to Kansas City in late July, they introduced Rogan to their followers in a pair of exhibitions against a Beloit, Kansas, semipro team. In the first game, Rogan played the outfield, batted 3-for-4 with a double, and scored three runs. In the second contest, he pitched a five-hitter, struck out 12, and won, 1-0.

Saturday’s contest was marred by a first-inning fist-fight between the Monarchs’ John Donaldson and the American Giants’ Leroy Grant, precipitated by a collision at first base. About 50 irate Kansas City fans jumped onto the field to join the fray, and it took a detachment of police to quell the disturbance and chase the intruders from the field.5 Both Donaldson and Grant were ejected, and Rogan took Donaldson’s spot in the batting order and in the outfield.

For Sunday’s game, Rogan was on the mound, and remained sixth in the batting order. Tom Williams pitched for Chicago and, like Rogan, he was undefeated. The crowd was described as the largest in the history of Association Park, which usually housed the American Association’s Kansas City Blues.6

Once again, the Monarchs took an early lead, scoring the game’s first run in the second inning, only to see Chicago respond with single runs in the fourth and fifth to go ahead, 2-1. The Monarchs regained the lead with two runs in the bottom of the fifth, and added one more in the eighth. Kansas City appeared to have the game wrapped up, leading 4-2 with two outs in the ninth, when “a trio of healthy blows” off Rogan produced two Chicago runs to tie the game.7

The American Giants threatened to score again in the 11th. With a runner at third, a Chicago batter blistered a hot grounder past first base. Monarchs first baseman George Carr fielded it, and made “a spectacular slide,” beating the baserunner to the bag for the third out.8

The game was decided in the 12th. Jack Marshall, who relieved Williams after Williams was lifted in the ninth for a pinch-hitter, began the inning by plunking Monarchs cleanup hitter Moore with a pitch. Moore was forced out at second by Donaldson’s grounder, bringing Rogan to the plate.

Rogan had stroked a triple earlier in the game and scored a run. This time, Rogan doubled, sending Donaldson home with the winning run, and ending Chicago’s 13-game winning streak. When Donaldson crossed home plate, fans erupted into a wild demonstration; Rogan was “carried from the field on the shoulders of many admirers.”9

The crowd went home happy, but perhaps no one at the ballpark was happier than Wilkinson. After giving Foster his share, the Monarchs mogul deposited gate receipts of $2,364.20 in his bank account – his most profitable day of 1920.10

Kansas City’s 5-4 win gave Rogan a perfect 4-0 record in NNL games. He surrendered 12 hits in 12 innings, but they were all singles, and “well scattered.”11 Rogan issued three walks, and fanned 13. In his two clashes with Chicago, Rogan had now thrown 21 innings, and registered 24 strikeouts.

Kansas City won the next day by the same 5-4 score, and made it three in a row by winning 6-5 on Tuesday. On Wednesday Chicago finally beat Rogan, tallying three runs in the eighth to prevail, 4-2; and in the final game, Monarchs manager Sam Crawford used his submarine delivery to blank Chicago, 4-0. For the first time, the American Giants had lost a series to a NNL foe.

Charles A. Starks, writing for the Kansas City Sun, found deeper significance in the Monarchs series with Chicago than “the mere results.” He wrote, “It is a great thing to have Negroes to become daily enthusiasts about something their fellows are doing. It means more race pride; more solidarity. The same is working in old K.C. We must not tell everything we hope or expect Negro baseball to do for the race, but we know that it is doing a wonderful lot of good.”12

In addition to the sources cited in the Notes, the author consulted the Seamheads.com Negro League data base and obtained game-day information and descriptions of the play-by-play from newspapers listed in the notes.

1 Rogan received the nickname “Bullet” in 1921. Phil S. Dixon, The Monarchs 1920-1938 Featuring Wilber “Bullet” Rogan: The Greatest Ballplayer in Cooperstown (Sioux Falls, South Dakota: Mariah Press, 2002). He is referred to as Wilbur [sic] in the available newspaper descriptions of this game.

6 The attendance was a point of controversy. The Black-owned weekly Kansas City Sun estimated 20,000, while the White-owned daily newspapers estimated 15,000, and said it was the biggest attendance of the year, but did not report it as the largest in the ballpark’s history. The Sun declared that the lower figure put forth by the White-owned dailies “is not calculated to be so accurate as it is something else.” Charles A. Starks, “Monarchs Swamp the Mighty Rube,” Kansas City Sun, August 7, 1920: 8.