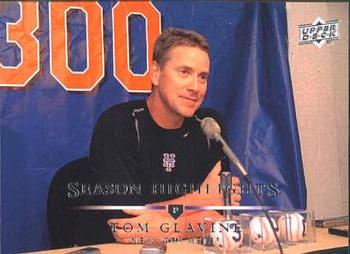 Before Tom Glavine joined the New York Mets in 2003, he had already put together a résumé fine enough to let him one day walk through the front doors of the Baseball Hall of Fame. Glavine had been a full-time starter in Atlanta since 1988 and racked up an impressive 242-143 record with a 3.37 ERA in 16 seasons. The left-handed hurler from Billerica, Massachusetts, led the National League in wins five times, each with 20 or more wins. He won two Cy Young Awards (1991 and 1998), was a World Series MVP (1995), and he was selected to participate in eight All-Star Games.

But after contract negotiations between Glavine and the Atlanta Braves front office broke down after the 2002 season, he looked elsewhere for employment. He found a home in Queens, New York, pitching for the Mets. But he soon discovered, playing baseball in Gotham was much different than playing in Dixie. The Braves were division champs 11 times (1991-1993, 1995-2002),1 and had won five pennants and one World Series championship.

The Mets were far less successful, winning wild-card berths in 1999 and 2000, and one pennant, in 2000. After Glavine left the Braves, Atlanta’s winning continued; the Braves claimed division titles from 2003 to 2005.

Glavine struggled a bit in his new surroundings. He posted losing seasons in 2003 and 2004, but improved to 13-13 in 2005. In 2006 the Mets were led by the 40-year old southpaw who pitched his way to a 15-7 record with a 3.82 ERA. Fellow pitcher Steve Trachsel matched Glavine in wins with 15 and the Mets won their first division title since 1988. They advanced to the NLCS, but lost to St. Louis in seven games.

But as the Mets continued their march to a possible postseason, Glavine (9-6, 4.38 ERA) was moving forward to baseball immortality. He had 299 career wins and at the age of 41 was looking to add the final piece to a masterful career.

The Cubs were no slouches. Chicago (58-51) trailed Milwaukee (60-51) by a single game in the NL Central before the rubber game against New York. Cubs manager Lou Piniella sent Jason Marquis (8-6, 4.22 ERA), a former teammate of Glavine’s in Atlanta, to the hill. Marquis had success earlier in the season, winning five straight games from April 16 through May 9.

As if there was not enough on the line; Glavine going for number 300, the Cubs and Mets battling for a playoff position, Sunday Night Baseball and its national television audience made their way to the “friendly confines.”

After a scoreless first inning, the Mets broke through in the second when with two outs, Lastings Milledge walked, stole second base, and came home on a single to center by Glavine for a 1-0 lead.

The Cubs threatened to dent the scoreboard in the home half of the third inning. With two down, the Cubs got back-to-back singles from Alfonso Soriano and Ryan Theriot. But as Soriano tried to go to third base, he tore his right quad. He couldn’t make it to the bag and was tagged out. Similarly, the Mets got two men on base in the fourth when Milledge singled with two out and Glavine walked. But Jose Reyes grounded to second base for the third out.

Luis Castillo led off the Mets’ fifth with a single to center field. Castillo moved to second base on a fly out to center, and scored on a double to right by Carlos Delgado. Moises Alou grounded out to second base and Delgado held his ground. But he moved to third when Marquis uncorked a wild pitch. Delgado leisurely crossed the plate with the Mets’ third run when Shawn Green doubled to right.

The Mets tacked on two more runs in the top of the sixth inning, knocking Marquis out of the game. He was relieved by Scott Eyre. New York was up 5-0 when the Cubs finally got a run off Glavine. Back-to-back doubles by Derrek Lee and Aramis Ramirez plated one run, and the Mets now led 5-1.

The biggest cheer thus far was for Kerry Wood, making his first appearance in a game since June 6, 2006, at Houston. Sidelined by a sore shoulder, he had been rehabbing the shoulder for 14 months. The fans at Wrigley gave him a standing ovation when he entered the game, and he pitched a scoreless inning.

The Cubs inched closer in the bottom of the seventh. With one out Angel Pagan doubled to left. That spelled the end of the evening for Glavine. New York manager Willie Randolph brought in Guillermo Mota. Glavine’s 300th win was now in the hands of the Mets’ bullpen corps. Jason Kendall singled Pagan to third base, and Piniella called on the left-handed swinging Jacque Jones to pinch-hit. Piniella’s former Yankees teammate, Randolph, countered with a move to his bullpen and summoned southpaw Pedro Feliciano. Jones grounded out, scoring Pagan. Mike Fontenot followed with a double to left to plate Kendall and the Mets’ lead was sliced to 5-3.

However, New York tallied two runs in the top of the eighth and one in the ninth to extend its lead to 8-3. Closer Billy Wagner shut the door on Chicago in the bottom of the ninth to put the game on ice.

Glavine became the 23rd major-league pitcher to win 300 games. He scattered six hits in 6⅓ innings, giving up two earned runs, walking one and striking out one. “The feeling right now is probably relief,” Glavine said.2

Glavine emerged from the visitors’ dugout and took a bow, acknowledging the cheers of the crowd. “You try not to get too far ahead of yourself, regardless of what the score is, or what the situation is,” he said. “I guess with two out and Billy [Wagner] on the mound, a four-run lead, at the time I felt pretty good about this thing finally being over. For the most part, the emotion I have is relief. I think at some point in time-I don’t know when-the historic side will sink in. Believe me I know the company I’m in. And I’m proud as can be to be a part of that company.”3

“I didn’t know what to say,” said Wagner. “Seeing how happy and overjoyed he was was enough.”4

Unfortunately for Glavine and the Mets, they came up short in securing a spot in the postseason. They went 1-6 in their last seven games. Philadelphia went 4-2 in the same span and edged out the Mets by one game in the East. The Cubs won the NL Central, but were swept by Arizona in the Division Series.

Glavine returned to Atlanta for his final season, 2008. His career record was 305-203 with a 3.54 ERA. He was inducted into the National Baseball Hall of Fame in 2014. Glavine was named on 91.9 percent of the ballots. He had familiar company; as Braves manager Bobby Cox and Braves pitcher Greg Maddux were also inducted that year.

The author accessed Baseball-Reference.com for scores, play-by-play information, and other data, and retrosheet.org.

1 Montreal was leading the National League East by six games over Atlanta when the season was on August 12, 1994, after the players union struck.