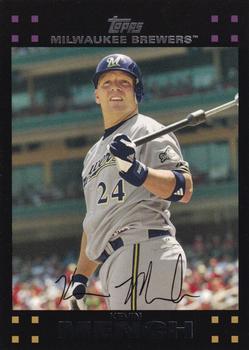 The 2006 World Series champion St. Louis Cardinals were hardly an overwhelming outfit. They crossed the finish line with a record of 83-78. They closed the season with a 25-32 record, squeaking by the Houston Astros (82-80) by a mere 1½ games in the National League’s Central Division.

But in the postseason, St. Louis disposed of San Diego in four games to win the NLDS and then outlasted the New York Mets in the NLCS after a hard-fought seven-game series. The Cardinals capped their postseason by knocking off Detroit in five games in the World Series.

The Cardinals fielded their same everyday lineup in 2007, and they quickly found that their opponents were not going to roll over for them. While Cardinals manager Tony La Russa’s lineup may not have been altered, his pitching staff was indeed different. Number-one starter Chris Carpenter reported to spring training and soon experienced soreness in his elbow. Bone spurs were identified as the source of the pain, but eventually it was determined to be ligament damage that required Tommy John surgery. Carpenter made only one start in 2007. Jason Marquis and Jeff Suppan finished second and third in wins after Carpenter in 2006. After the season both left St. Louis via free agency. Marquis signed with the Chicago Cubs and Suppan with Milwaukee.

As a result, the starting rotation for the Cardinals featured Adam Wainwright, Braden Looper, and Kip Wells.

The pitching matchup for the first game of the series at Busch Stadium featured Vargas (8-2, 4.47 ERA) for Milwaukee and Mike Maroth for St. Louis. Maroth had been acquired from Detroit on June 22 as the Cardinals tried to shore up their pitching staff. So far, the move had not yielded positive results as Maroth (0-3, 8.17 ERA) was finding the going a bit rough in the National League.

After two scoreless innings, the Brewers jumped in front with five runs in the third inning. With one down, Hart doubled to left and scored on a single to center by Hardy. Maroth struck out Braun for the second out, but then Fielder stroked a double to put runners on second and third. Bill Hall singled to left to score both runners and took second on a throw home. Kevin Mench followed with an infield single to put runners on the corners.

The rally was interrupted by a 39-minute rain delay. But the downpour did not deter the Brewers from scoring more runs. When play resumed, back-to-back base hits by Johnny Estrada and Tony Graffanino plated both Hall and Mench, ending the scoring.

Each team scored one run in the fourth inning. Hart did the honors for Milwaukee by smacking his 15th home run of the year. The Cardinals went the singles route for their run. Scott Rolen and Adam Kennedy hit consecutive singles to put runners on first and third. Gary Bennett’s sacrifice fly to center field scored Rolen. But the Cardinals still trailed 6-1.

The roof caved in on the Cardinals in the top of the fifth inning. After Hall led off with a double, La Russa replaced Maroth with reliever Kelvin Jimenez. But the young right-handed hurler from the Dominican Republic did not provide relief. Mench singled and Estrada walked to load the bases. Graffanino was hit by a pitch from Jimenez to bring home Hall. After Vargas struck out, Hart and then Hardy singled to score a run and reload the bases. The final run scored when Braun’s sacrifice fly to right drove Graffanino home.

With their lead extended to 10-1, and the game essentially over, a fireworks display detonated from behind right field. Unfortunately, for the 45,137 who were in attendance, the unexpected explosion was not emblematic of their team’s offense.

The rest of the game was academic. Although the Cardinals were getting men on base, they were not scoring runs, Vargas was in complete control. He pitched eight innings, striking out eight and walking one. Vargas raised his season record to 9-2 as the Brewers eventually won the game by a score of 12-2. Milwaukee hammered Cardinals pitching for 19 hits.

The good news for the Cardinals followed immediately, as they won the next three games to win the series. However, it did little to save the Cardinals’ season. They finished the 2007 campaign with a record of 78-84.

The author accessed Baseball-Reference.com and Retrosheet.org for box scores, play-by-play, and other data.

Other sources used were the game stories from these two newspapers: