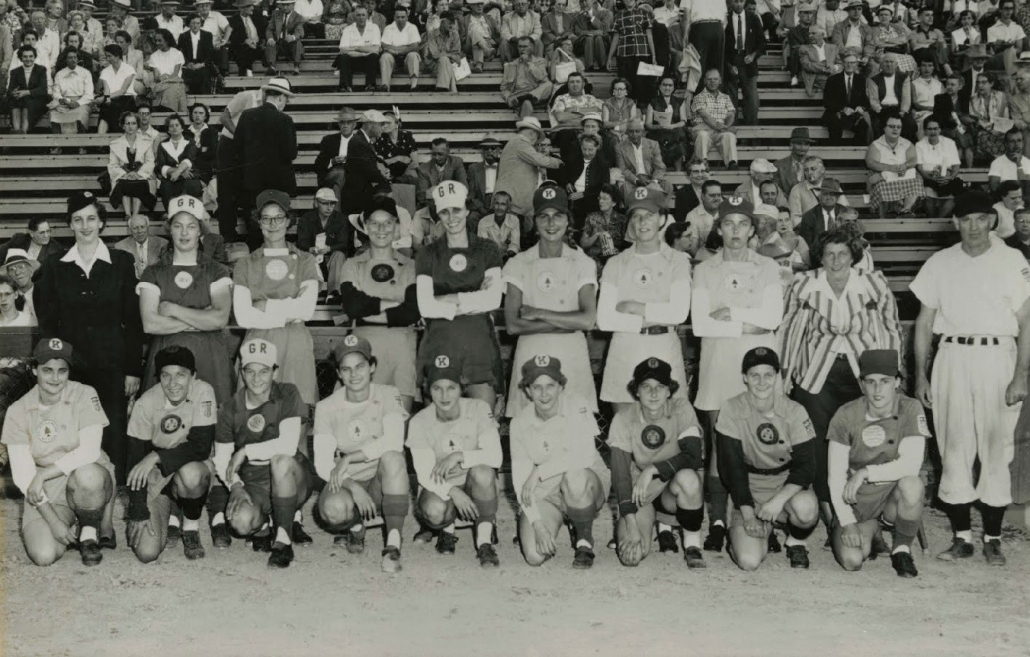 The players were still adjusting to the major rule changes as they gathered in Fort Wayne, Indiana, for the third annual All-American Girls Professional Baseball League (AAGPBL) All-Star Game.1 The league, attempting to boost offense and attendance, had taken its final step toward playing regulation baseball just eight days earlier. The pitching rubber was moved from 56 to 60 feet away from home plate and the basepaths were increased from 75 to 85 feet, but perhaps the most significant change made was to the baseball itself.2 The sphere was reduced to 9 inches in circumference,3 the same as in men’s professional baseball.

Woody English, manager of the Grand Rapids Chicks, was fully supportive of the changes. “We need more hitting and less bunting and stealing,” he opined. “We should see more home runs and extra-base hits.”4 English was largely correct. Despite the season more than one-third complete when the changes were made, home runs increased by a factor of six in 1954, although doubles remained fairly constant and triples declined sharply with the longer basepaths.5

The rule changes had a notable impact on the 1954 All-Star Game. The Fort Wayne Daisies, by virtue of having the league’s best record on the morning of July 5, had earned the right to host the contest, pitting them against the best players from the other four teams.6

Fort Wayne’s home ballpark, Memorial Park, had a left-field fence that was as close as 218 feet from home plate,7 only eight feet more than the league minimum.8 With the Daisies having by far the best offense in the league and the All-Star roster loaded with firepower, all the ingredients were in place for a high-scoring game.

Nine players appeared in all three AAGPBL All-Star games played between 1952 and 1954,9 including Kalamazoo shortstop Dorothy “Dottie” Schroeder and Rockford outfielder Eleanor “Squirt” Callow, both of whom had had a big impact on the 1954 game.

South Bend Blue Sox right-hander Janet Rumsey earned the start for the All-Stars. Rumsey was on her way to leading the league with a 2.18 ERA in 1954, and she came into the game with a 7-3 record.10

Maxine Kline (later Randall), who was also a member of the elite group of nine to appear in all three All-Star Games in the 1950s, got the start for the Daisies. She had tossed a total of four shutout innings in the previous two All-Star Games, including a three-inning start in 1952. Kline sported an 8-3 record up to that point in the 1954 season. With the offense-friendly rules in effect, she went on to post the highest earned-run average of her stellar seven-year career at 3.23, which was still sixth best in the league. Decades later, Kline still recalled having trouble locating her pitches with the new nine-inch ball.11

Fort Wayne’s potent offense was led by its dynamic center fielder, Joanne “Jo” Weaver. Even though she was only 18 years old, the young phenom was in pursuit of her third consecutive batting title. After batting .344 and .346, respectively, in the previous two seasons, Weaver was poised for an even better season in 1954.

Rumsey and Kline pitched the customary three All-Star innings. Both starters were roughed up, as Rumsey gave up three solo homers and Kline surrendered one costly round-tripper.

Most of the early damage by the All-Stars came on a three-run homer by Schroeder in the top of the second.12 The big Fort Wayne blasts were solo home runs from Alice Blaski and Weaver in the bottom of the first and Kline’s solo shot in the second.13 The Daisies scored three runs in the third on only two hits, with two of those runs scoring on wild pitches by Rumsey. After three innings, Fort Wayne led the All-Stars, 7-5.

Marilyn Jones (later Doxey) got a rude welcome when she relieved Kline in the top of the fourth. A single, two walks, and a wild pitch produced a run for the All-Stars, cutting the lead to one run. Callow, perhaps the greatest run producer in AAGPBL history,14 doubled home two more runs in the inning, giving the All-Stars an 8-7 lead. They were the second and third RBIs of the game for Callow.15

Rockford hurler Rose Gacioch took over the pitching duties from Rumsey in the bottom of the fourth. After two scoreless innings, Gacioch was victimized in the bottom of the sixth by Weaver’s second solo home run to left field, tying the game, 8-8. The Fort Wayne News-Sentinel, which had previously referred to her as “Joltin’ Jo” Weaver, had recently started calling her “The Jolter.”16 After never hitting more than five homers in a season, Weaver exploded for a league-record 29 home runs in 1954.

The game remained tied until the bottom of the eighth. Kalamazoo pitcher Gloria Cordes (later Elliott), who had come into the game an inning earlier, gave up a pair of singles to Katie Horstman and Weaver, and when the recently inserted left fielder, Wilma Briggs, let one of those hits get by her for an extra base, the potential go-ahead run was only 85 feet from home plate.17 After Cordes intentionally walked two-time batting champion Betty Weaver Foss to load the bases,18 a passed ball by Kalamazoo’s Jean Lovell (later Dowler) brought Horstman home with the tiebreaking run.19 The Daisies picked up an insurance marker on a bloop single by Jean Geissinger (later Harding) that allowed Jo Weaver to trot home with her third run of the game.

With the Daisies only three outs away from victory, unheralded Noella “Pinky” LeDuc (later Alverson) returned to the mound for her third inning of work. The 20-year-old righty had grown up playing baseball with the boys in her hometown of Graniteville, Massachusetts, so she preferred throwing a regulation-sized ball.20 On the first day the smaller ball had been put into use, she tossed a complete-game victory against South Bend.21 Her hot streak continued in the top of the ninth, and she held the powerful All-Stars off the scoresheet for the third consecutive inning. LeDuc picked up the win in a 10-8 Daisies victory.

Fort Wayne manager Bill Allington had played the game to win, as all eight of his position players were left in for the entire game. English, on the other hand, got almost all of his players into the action.22 Allington, the winningest manager in AAGPBL history,23 managed in—and won—all three All-Star Games played in the 1950s.24

Weaver went on to have a career season in 1954, winning her third consecutive batting title. She finished with a stunning .429 batting average, 52 percentage points ahead of the nearest competitor, her teammate Geissinger, and 161 percentage points better than the league batting average.25 Weaver also led the league in home runs, stolen bases (79), runs scored (109), and total bases (254). She fell five RBIs short of becoming the only woman to win the Triple Crown.26 The performance earned Weaver the Player of the Year Award, and for the third consecutive year she was named to the end-of-season All-Star team.

The Daisies cruised to the pennant for the third year in a row, finishing five games ahead of second-place South Bend. But for the third consecutive season they fell short in the playoffs. Ahead two games to one in the best-of-five championship series, Fort Wayne took a 5-2 lead into the eighth inning of Game Four before the Kalamazoo Lassies came roaring back against a faltering Kline to win, 6-5.27 The Lassies won the winner-take-all Game Five, giving them their only playoff championship in franchise history. It turned out to be the final game ever played in the AAGPBL.

The league had been in a slow decline since reaching its apex in 1948 as a 10-team circuit. Attendance had peaked at 910,000 that season; by 1954, the league may have been drawing fans at roughly half that rate.28 Reasons for the precipitous drop in attendance included the “return to normalcy following (World War II), the spread of television, advances in the travel industry (including personal travel) and the rise of the nuclear family.”29

Over a 12-year period, the league had made a huge impact on American sports history and the lives of the pioneering women who played in it. The last-gasp rule changes made in the middle of the 1954 season may not have solved the league’s financial issues, but the All-American Girls Professional Baseball League quietly enjoyed a glorious swan song.

In addition to the sources cited in the Notes, the author consulted AAGPBL.org and The All-American Girls Professional Baseball League Record Book. Unless otherwise noted, all play-by-play information for this game was taken from the article “Daisies Win 2nd All-Star Game in Row” on page 9 of the July 10, 1954, edition of the Fort Wayne News-Sentinel.

1 This was the fourth and final All-Star game in league history. The first AAGPBL All-Star Game, which was also the first night game ever played at Wrigley Field, was held on July 1, 1943. An annual midseason All-Star Game was instituted in 1952. At the completion of every season from 1946 until 1954, the league named an All-Star team (usually) consisting of four pitchers, three outfielders, and one player at the other five positions.

3 The South Bend Tribune listed the previous ball as 9¾ inches in circumference in a July 1, 1954, article, although most sources list it at 10 inches. “Blue Sox Shift to Small Ball”; “Rules of Play,” All-American Girls Professional Baseball League, https://www.aagpbl.org/history/rules-of-play, accessed March 8, 2022.

13 The Daisies scored three runs in the bottom of the first. It is unclear how the third run came home. Blaski hit only 5 home runs in 306 career at-bats in the AAGPBL. Kline had previously hit only one home run in her AAGPBL career. That came on June 10, 1950, against Racine’s Erma Bergmann. Kline hit two more homers after the All-Star Game, giving her three regular-season round-trippers in her seven-year AAGPBL career. “Belles Sweep Twin Bill After Losing Saturday,” Racine Journal-Times, June 12, 1950: 13.

14 Callow’s 407 career RBIs place her third on the all-time list of run producers. Of the five sluggers who drove in at least 400 runs in their career, nobody drove in runs at a faster clip than Callow, who averaged 88.3 RBIs per 600 regular-season at-bats.

15 Callow’s first RBI came on a sacrifice fly in the top of the first inning. “Daisies Trip Stars, 10-8.”

18 Betty Weaver Foss and Jo Weaver were sisters. Betty was roughly 6½ years older than Jo. Between the two sisters, they won five consecutive AAGPBL batting titles for Fort Wayne (Betty in 1950-51 and Jo from 1952 to 1954). A third Weaver sister, Jean, played for the Daisies from 1951 to 1953. Jean was two years older than Jo.

19 Lovell had recently come into the game as a substitute for starting catcher Ruth Richard.

25 As of March 2022, the last player to bat .400 in the American or National League was Ted Williams in 1941. Williams hit .406 that season, which was just over 139 percentage points better than the league average.

26 Audrey Wagner of the Kenosha Comets came the closest to winning the Triple Crown. She led the league in home runs (7) and RBIs (53) in 1947, but fell one hit short of winning the batting title. Wagner batted .305, second behind Dorothy “Dottie” Kamenshek’s .306 average.