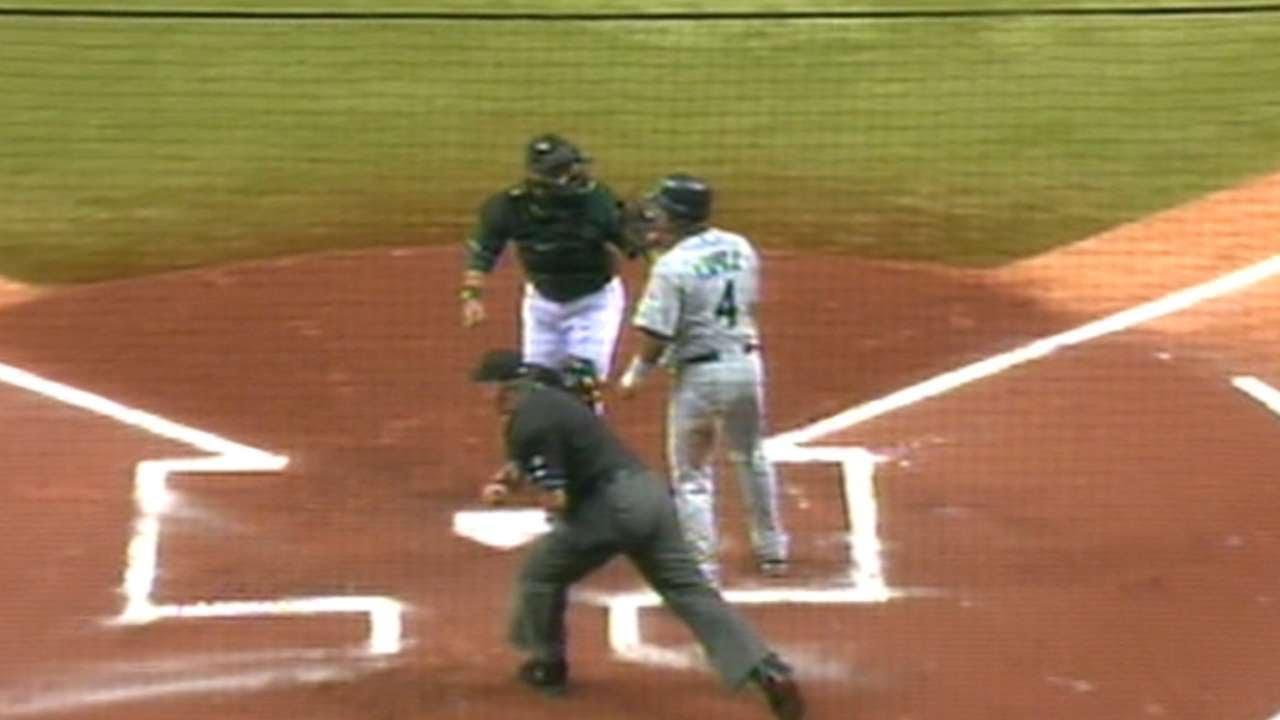 Some fans claim they’ve seen it all. Yet a crowd of only 14,503 at Tropicana Field in St. Petersburg, Florida, can state that they witnessed perhaps the rarest triple play in baseball history. In fact, some of those spectators may have missed it, as the excitement took place in the top of the very first inning. The Seattle Mariners were visiting the Tampa Bay Devil Rays in a Labor Day Weekend contest.

With about a month left in the regular season, Seattle had lost 12 straight road games and had fallen to last place in the four-team American League West Division. Mariners manager Mike Hargrove handed the ball to pitcher Cha-Seung Baek in hopes of a win. Baek was in his second stint with Seattle, making his third start of 2006. Tampa Bay, in last place in the five-team American League East Division, countered with J.P. Howell. Howell had come to the Devil Rays in a June 20 trade with Kansas City, and this was his fourth start of the season (all with Tampa Bay).

Mariners All-Star Ichiro Suzuki led off the game with an infield single to second baseman Jorge Cantu. Jose Lopez walked, and Adrian Beltre singled into right field, scoring Suzuki. Lopez raced around to third base. The Mariners’ cleanup batter was Raul Ibanez, and he worked Howell to a full count. Howell delivered, and Ibanez took strike three. Beltre, who had broken for second base on the pitch, “stopped before reaching the base when catcher Dioner Navarro’s throw easily beat him to the bag.”1 Shortstop Ben Zobrist caught Navarro’s throw and ran Beltre back to first, tagging him after a few steps. Zobrist then whirled and fired to the plate, where Navarro tagged out Lopez, who had run toward the plate thinking Beltre was in a rundown. Triple play! Plus, the Devil Rays escaped the inning with only one run allowed.

Zobrist praised Navarro after the game, telling reporters that “his throw down to second was perfect. It led me straight into him where I could take it and just continue running and make the tag. I saw the guy taking off for home, so it’s snap, snap, just like that.”2 Howell said the play was “like a snowball fight. Threw a strike, and let them do it. I just watched the ball fly around.”3 Devil Rays skipper Joe Maddon chimed in with, “That was pretty neat. Zobrist really made the play happen. In a practice situation, you couldn’t do it any better.”4

Tampa Bay answered with a run in the bottom of the first. Rocco Baldelli, batting in the leadoff spot, clubbed his eighth home run of the season, over the center-field fence. In the third inning, Suzuki again got things started, He singled to left field and advanced to second on Lopez’s single to center. After Suzuki stole third, Beltre picked up his second RBI of the game with a single to left. Ibanez worked another full count, and this time he walked to load the bases. Richie Sexson followed with a sacrifice fly to center that scored Lopez for the Mariners’ third run.

Things settled down, with each side trading scoreless innings until the top of the eighth. The two starters each lasted 6⅔ innings, with Shawn Camp replacing Howell and Joel Pineiro replacing Baek. In the top half of the eighth, singles by Ibanez, Sexson, and Kenji Johjima loaded the bases with one out. Michael Morse banged a sacrifice fly to right field, and Ibanez came home with the fourth Seattle run of the game. Down by three runs, Tampa Bay tried to rally in the bottom half. Delmon Young led off with a home run into the right-field stands, his second of the season.

George Sherrill then came on to pitch for Seattle. Carl Crawford and Greg Norton hit back-to-back singles, and with no outs Hargrove had seen enough. He brought in J.J. Putz to relieve Sherrill, who failed to retired a batter. On a 1-and-0 count, Ty Wigginton hit into a 6-4-3 double play, and when Navarro popped out to the shortstop, the Devil Rays had to settle for just one run. Zobrist, the fielding hero of the first inning, hit a two-out home run in the ninth, his second homer of the season, but the three Tampa Bay solo home runs were not enough to stop the visiting team from winning, 4-3.

From May 13, 1876, through the end of the 2016 regular season, there have been 709 triple plays turned in major-league history.5 According to the SABR Triple Plays Database, a catcher has made the first putout 33 times.6 This, though, was the only one featuring a 2-6-2 sequence. It also was the first (and only, through the 2016 season) triple play in which the catcher made the first and third putouts, making it rarer than an unassisted triple play. Further, the ball was never put into play.

(The last batter to strike out into a triple play before this game did it 24 years earlier. New York Yankees batter Roy Smalley did the deed on May 29, 1982, against the Minnesota Twins. The play went 2-5-3-1.)

The September 2 triple play was the fourth one (of five) turned in 2006, and the second against the Mariners. On May 27, Johjima had hit into a 4-3-5 triple play in the eighth inning at Minnesota. It was also only the second triple play in Tampa Bay’s nine-season history thus far,7 and the first turned at Tropicana Field.

Seattle gained its first road win since it beat Baltimore on August 2. Baek earned the victory, upping his record to 2-0. Putz collected his 29th save with two innings of work. Howell, meanwhile, took his second loss of the season. He allowed three runs on eight hits and three walks in 6⅔ innings. Seattle finished the season by going 14-13 down the stretch, while Tampa Bay struggled with a 7-19 end to 2006. On a positive note, Suzuki posted his 57th multi-hit game of the season, en route to 224 hits, the best in the majors.

In addition to the sources mentioned in the notes, the author consulted baseball-reference.com, mlb.com and retrosheet.org.Thanks to Stew Thorney for information on the Twins triple play.