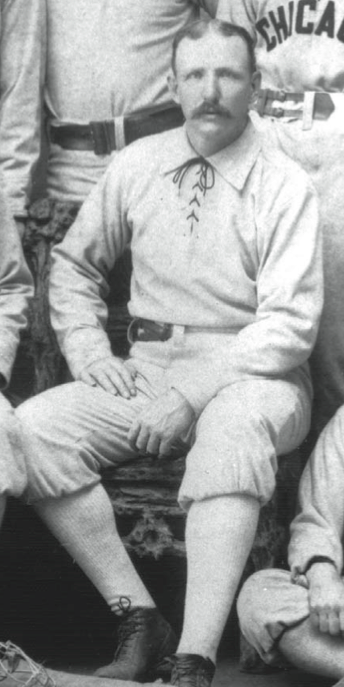 More than any other achievement in the statistically obsessed game that is baseball, Anson’s hit totals are subject to debate. The most respected statistical references in the game disagree on how many hits the 19th-century Chicago star actually had … or whether he even reached 3,000. The Hall of Fame credits Anson with 3,081 hits. But The ESPN Baseball Encyclopedia gives him 3,012. Baseball Reference says Anson had 3,435 hits. Project Retrosheet accepts both the 3,012 and 3,435 figures, while the Macmillan Encyclopedia gives him an even 3,000. Total Baseball credits Anson with 2,995. Anson biographer David Fleitz puts the figure at 2,995 or 3,418.[fn]Hall of Fame data from http://www.baseballhall.org/hof/anson-cap; Total Baseball data from Total Baseball, Revised and Updated, 2004. ESPN Baseball Encyclopedia data from 2006 ESPN Baseball Encyclopedia by Gary Gillette and Pete Palmer; Baseball Reference data from http://www.baseballreference.com/players/a/ansonca01.shtml; Fleitz data from David Fleitz, Cap Anson, The Grand Old Man of Baseball, (Jefferson, N.C.: McFarland, 2005). Macmillan data from The Macmillan Baseball Encyclopedia, 1996. The Fleitz hit total discrepancy is attributable to the author’s ambivalence on the question of whether to count the 423 hits Anson is credited with during his years playing in the National Association.[/fn]

But the legitimacy of the Association as a major league is hardly the only question. The keeping of statistics was an imprecise science in the 19th century, occasionally flavored by favoritism depending on who was keeping the stats. In no case was this truer than with Anson, whose presence engendered strong sentiments, both favorable and unfavorable. There is evidence that scorekeepers and league officials tampered with the record books to inflate his hit totals. Although Anson was the game’s first great star, the major reference works today agree on his hit totals for a mere nine of his 22 seasons. For example, in 1894 Total Baseball, Macmillan, and Fleitz credit Anson with having made 132 hits. But ESPN, Baseball Reference, and Retrosheet say he made 133, and the Hall of Fame puts the total at 137.[fn]Ibid.[/fn]

Changes in rules contribute another source of controversy. In 1887 the National League adopted a rule counting bases on balls as hits. Anson had 60 walks that year, and the Hall of Fame counts those walks as hits because that’s how they were recorded in 1887. None of the other major references do.[fn]The Hall of Fame’s inclusion of the 1887 walk totals as hits (see the citation above), is not decisive to Anson’s 3,000-hit total, since even if those 60 walks were subtracted from his career hits the Hall would still credit him with 3,021 hits.[/fn]

If we accept the 3,012 hit total as a best estimate, then Anson reached 3,000 during the last game he ever played in Chicago. The date was September 19, and the Colts—preparing for a season-ending road trip to Cleveland, Pittsburgh, and St. Louis—were hosting Louisville’s Colonels in what gave every appearance of being an insignificant game between the ninthand eleventh-place teams.[fn]The game account is based primarily on reporting from the Chicago Tribune, September 20, 1897, supplemented by the Baltimore Sun, September 20, 1897.[/fn] 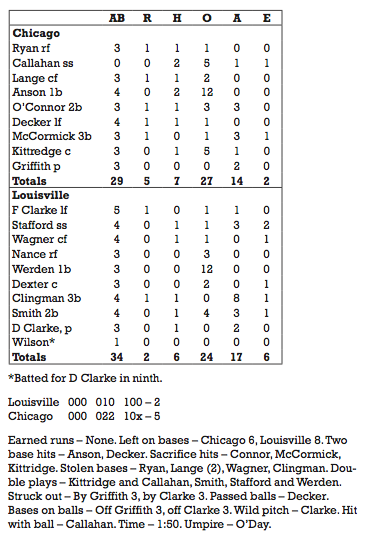