SABR members can download all Digital Library publications for free or get 50% off the purchase of paperback editions. Click here to sign up for a SABR membership.

Paperback or e-book editions of all of our award-winning books, Biography Project team books, and past editions of the Baseball Research Journal and The National Pastime can be found at Amazon.com.

Scroll down to learn more about our featured publication or how to get involved with SABR as a writer, editor, or fact-checker.

Here’s our newest book in the SABR Digital Library 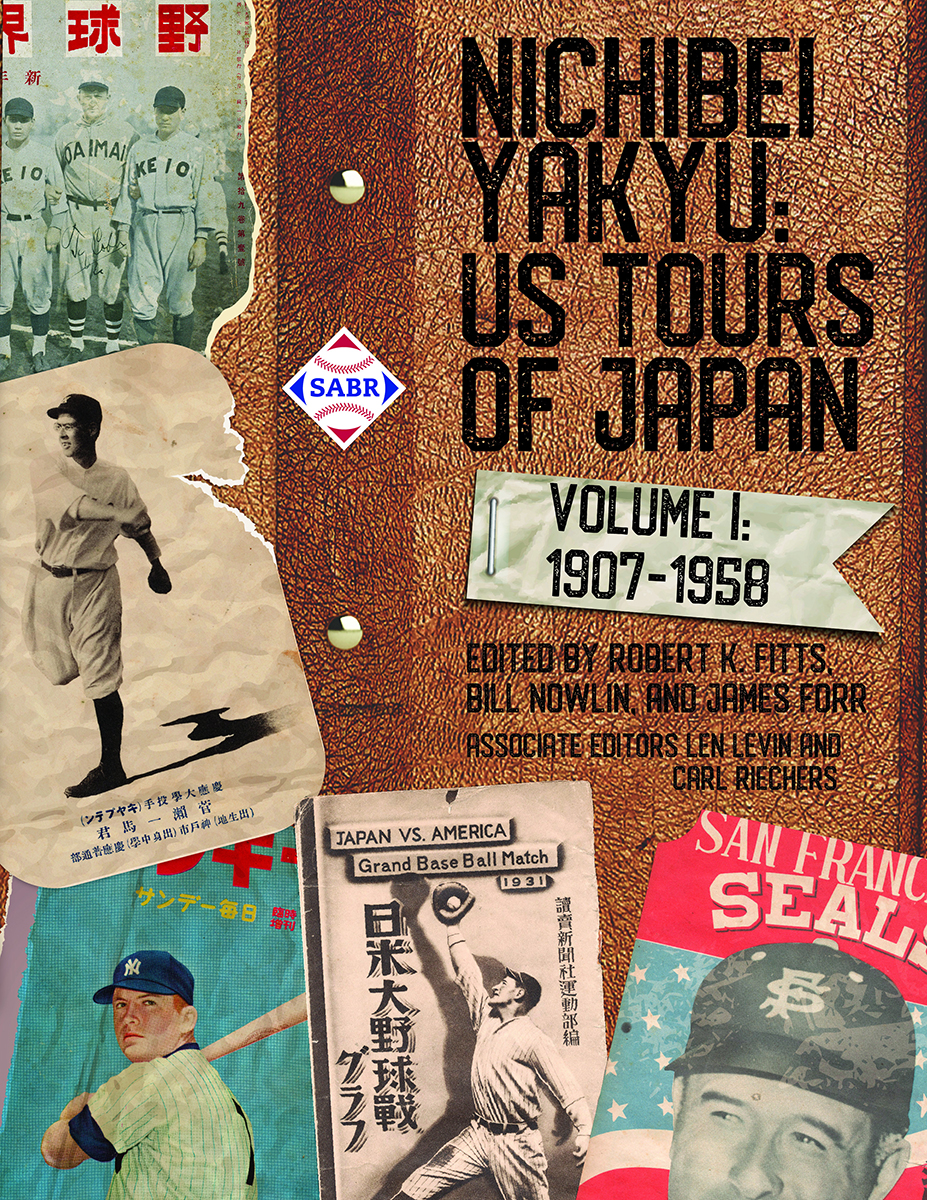 To celebrate the 150th anniversary of Japanese baseball, the Society for American Baseball Research (SABR) is proud to publish Nichibei Yakyu: US Tours of Japan.

Over 100 baseball teams from the United States and Hawaii have crossed the Pacific to play baseball in Japan. Nichibei Yakyu: US Tours of Japan is the first book written in English that focuses on these international tours.

In this book, discover how:

These, and many other stories, introduce readers to the fascinating world of Japanese baseball.

Volume 1 focuses on tours between 1907 and 1958. During this time period, many of the sport’s greatest stars—including Babe Ruth, Lou Gehrig, Ty Cobb, Joe DiMaggio, Willie Mays, Mickey Mantle, Jackie Robinson—played in the Land of the Rising Sun. These tours helped spread the game across the globe, spawned thousands of individual friendships, and helped bring nations together through the mutual love of baseball.

Volume 1 contains individual chapters written by leading members of the Society for American Baseball Research on all 15 professional squads that traveled to Japan before 1960 as well as four collegiate and eight amateur/semipro teams. Each chapter is accompanied by game results and, when available, player statistics.

Lead editor Robert K. Fitts is the author of seven books on Japanese baseball and Japanese baseball cards. Fitts is the founder of SABR’s Asian Baseball Committee and a recipient of the society’s 2013 Seymour Medal for best baseball book of 2012, the 2019 McFarland-SABR Baseball Research Award, the 2012 Doug Pappas Award for best research presentation at the SABR convention, and the 2006 and 2021 SABR Research Awards. He has twice been a finalist for the Casey Award and has received two silver medals at the Independent Publisher Book Awards. While living in Tokyo in 1993-94, Fitts began collecting Japanese baseball cards and now runs Robs Japanese Cards LLC. Information on Rob’s work is available at RobFitts.com.

Click on a book cover below to find out more and order these great titles from the SABR Digital Library:

If the Load More button is not loading, click here to view all book titles in the SABR Digital Library.

For the past half-century, SABR and its members have led the way in publishing the best baseball historical and statistical research.

SABR members can download all Digital Library publications for free or get 50% off the purchase of paperback editions. If you’re not a member, click here to join SABR.

Click on a link below to learn more about getting involved with SABR as a writer, editor, or fact-checker; new and experienced authors are always welcome to contribute to our Research Collection!