Robert Peterson in his landmark book, Only the Ball Was White, wrote:

“Tracing the course of the organized Negro Leagues is rather like trying to follow a single black strand through a ton of spaghetti. The footing is infirm, and the strand has a tendency to break off in one’s hand and slither back into the amorphous mass.”

Peterson’s groundbreaking work spawned a generation of Negro League researchers around the world, as they accepted the challenges presented. Primary sources are often fragmentary, scattered, contradictory, or nonexistent. Most hometown newspapers seldom wrote revealing biographies nor reported the results of road games. Therefore you must order microfilmed newspaper from other cities through Interlibrary Loan. Some newspapers where major Negro League games are reported, such as the Kansas City Call, are unavailable via ILL and therefore may require a personal library visit.

Another option is to purchase a membership for internet access of newspapers. Some of the Internet newspaper services have wonderful search engines, while others are laboriously slow with frequent false hits. Currently some of the black-oriented newspapers online are the Chicago Defender, Pittsburgh Courier, New York Amsterdam News, the Philadelphia Tribune, and the Baltimore Afro-American, leaving a void of more than 320 newspapers, black and white, in which Negro League box scores have been discovered. A list of black newspapers housed at the Library of Congress can be found at: http://www.loc.gov/rr/news/blackpr.html.

Some suggested research sites to visit:

Note that in some traditional white daily newspapers coverage is an afterthought, often times as space fillers or buried under the heading “semi-pro” or “amateur” baseball on the last page of the sports section.

Working on a limited budget, many black newspapers had one all-sports reporter, and provided seasonal reports. Come October, the second most popular sport in the heyday of shadow ball was college football gracing the front page. The paper’s sole reporter is watching Jackie Robinson scoring touchdowns for UCLA, while coverage of the Homestead Grays going for their umpteenth league title or World Series goes unrecorded. Currently, some Negro World Series games remain in hiding.

Relying on outside papers to provide game accounts, midway through the season you may find teams disappearing from the sports pages, only to ascertain the following spring, in an editorial, that they folded. Often information about roster changes and ownership transactions can be found in the seldom researched winter months, when league officials held their annual board meetings.

When compiling material about teams, players, and owners you must make several critical decisions. Do you include league teams playing against associated league teams? How does one handle games played on neutral sites or in non-major league parks? Because of unbalanced schedules due to ball park availability, team standings and mathematical-determined league champions can at times to be difficult to reconcile.

Selected bibliographies can be found at Larry Lester’s website, LarryLester42.com:

To find a grave we suggest using the Find A Grave website.

Or for military veterans, use the VA’s Grave Locator site.

Another source for information is the U.S. Railroad Retirement Genealogy Research website.

A finding aid for genealogy research of African Americans can be found at internationally known genealogist and teacher Tony Burroughs’ website.

Some of the major institutions in the U.S. that house major Negro League collections are in Philadelphia, Pennsylvania, like Temple University, Free Library of Philadelphia, and the African American Museum. Other suggested research goldmines include the Moorland Spingarn Research Center (Washington, D.C.), Newark Public Library (Newark, N.J.), Chicago Historical Society, and the National Baseball Hall of Fame & Museum (Cooperstown, N.Y.)

Perhaps the best networking blog on the internet for black baseball is Gary Ashwill’s website at http://agatetype.typepad.com. The best website for information about contemporary black players is the Negro Leagues Baseball Players Association’s website at http://www.nlbpa.com.

“OUT OF THE SHADOWS” PROJECT

Between 2001 and 2005, a group composed mostly of SABR members, and the eminent Robert Peterson, developed a narrative and statistical database. The raw narrative and bibliography was roughly 800 pages and was later developed into a book entitled, Shades of Glory, published by National Geographic with major writing contributions from Adrian Burgos, Leslie Heaphy, Larry Hogan, Neil Lanctot, Michael Lomax, James Overmyer, Rob Ruck, Lyle Wilson and Peterson.

As one prepares to analyze a Negro Leagues box score, be aware of some surprises and pitfalls encountered as you trace that spaghetti strand. 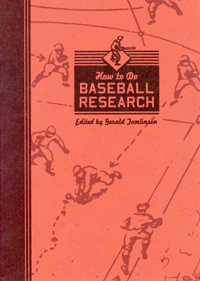 How to Do Baseball Research