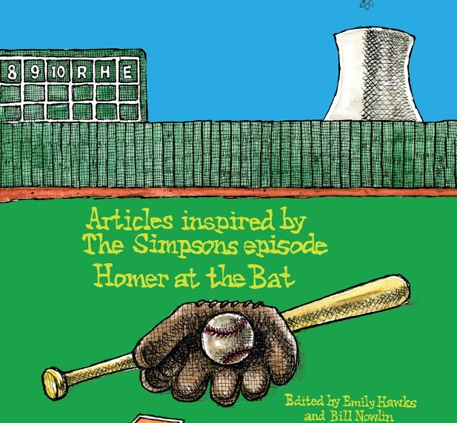 D’oh! Add an excellent new book from the SABR Digital Library to your collection:

The Simpsons and baseball. Since its debut in 1989 (that’s back in the last century!), The Simpsons has run for 27 seasons and (back in 2009) became the longest-running American scripted primetime television series. Though it would be considered sacrilege in some circles, some might even see it as a national pastime of its own.

The series has a long history with baseball and, in Season Three, the episode “Homer at the Bat” aired, on February 20, 1992. Co-editor Emily Hawks writes in her Introduction, “To see so many of the biggest MLB stars of the day in Simpsonian animated form — Ken Griffey Jr., Ozzie Smith, and Jose Canseco, just to name a few — seemed the most exciting thing in the world to this ’90s kid. And the fact that they all lent their own voices to the parts seemed even cooler. It may have also been one of my first glimpses into baseball’s early days. As a kid, I had no idea that Mr. Burns’ dream squad — comprised of colorful names like Shoeless Joe Jackson, Pie Traynor, and Napoleon Lajoie — actually referenced real players. Those seemed like decidedly fabricated names to me!”

They weren’t. They were real ballplayers. And, one way or another, Simpsons writers have worked the names of 68 major-league ballplayers into one episode or another. Football’s Joe Namath, Warren Sapp, and Johnny Unitas have appeared in shows. So have basketballers Kobe Bryant, Magic Johnson, Yao Ming, and Dennis Rodman. Without doing exhaustive research, we believe there may be more baseball players than the other pro sports combined.

Some 27 members of the Society for American Baseball Research (SABR) have collaborated in Nuclear Powered Baseball to tell the stories of each player — past and present — featured in the classic Simpsons episode. The biographies compiled here take the players well beyond their two-dimensional caricatures, and present a well-rounded view of their lives in baseball. We’ve also included a few very entertaining takes on the now-famous “Homer at the Bat” episode from prominent baseball writers Erik Malinowski and Bradley Woodrum. As an added bonus, we’ve also included Joe Posnanski’s piece on the Season 22 sabermetric-themed episode, “MoneyBart.”

For more than 40 years, SABR and its members have led the way in publishing the best baseball historical and statistical research. Our publications program is shifting to take advantage of new methods of publishing. Not only will we continue to publish new books like Can He Play? A Look At Baseball Scouts and Their Profession (released in December 2011); Opening Fenway Park in Style: The 1912 World Champion Red Sox (May 2012); Detroit Tigers 1984: What A Start! What A Finish! (December 2012); Sweet ’60: The 1960 Pittsburgh Pirates (April 2013); Inventing Baseball: The 100 Greatest Games of the 19th Century (July 2013); Thar’s Joy in Braveland: The 1957 Milwaukee Braves (May 2014); Detroit the Unconquerable: The 1935 Detroit Tigers (December 2014); Winning on the North Side: The 1929 Chicago Cubs (February 2015); Scandal on the South Side: The 1919 Chicago White Sox (June 2015); and The Team That Time Won’t Forget: The 1951 New York Giants (December 2015), which showcase the best efforts of SABR’s members, chapters and committees, but new technology makes it possible for us to bring out-of-print titles like Run, Rabbit, Run: The Hilarious and Mostly True Tales of Rabbit Maranville (February 2012), Great Hitting Pitchers (March 2012), Nineteenth Century Stars (August 2012); Batting (January 2013); The Fenway Project (September 2013); and ’75: The Red Sox Team That Saved Baseball (April 2015) back again.