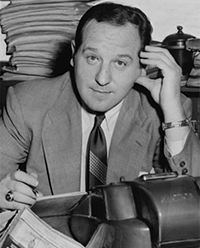 Allan Roth (1917-1992) was the first statistician to be employed full-time by a major-league team when he worked for the Dodgers from 1947 to 1964. He was hired by Branch Rickey, who was receptive to Roth’s ideas that understanding situational statistics (home/road, day/night, left-handed/right-handed pitcher, etc.) could help win games, and that RBIs were deceptive. Like the best sabermetricians that followed, he was known for taking bits of baseball conventional wisdom and asking, “Is this true?” Roth wrote a column in The Sporting News for many years, and after leaving the Dodgers did work on national baseball telecasts for NBC and ABC. As Bill James would later write, “He was the guy who began it all.”