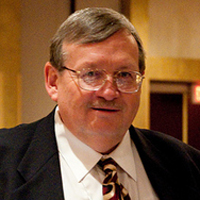 Tom Hufford was a college student at Virginia Tech when he became a founding member of SABR at its first meeting on August 10, 1971, in Cooperstown, New York. He was the organization's secretary in 1976 and was elected to the Board of Directors again in 2004, serving until 2012. Tom has a degree in architecture and urban planning, and spent 30 years in that field. He served as president of the Braves 400 Club (booster club) in 1991-92 and was a consultant to the Atlanta Braves during the design of Turner Field. His primary research interests are biographical research, the minor leagues, Latin American baseball, umpires, coaches, the Appalachian League and the Atlanta Braves.