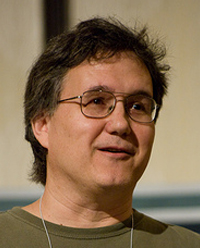 Tom Ruane (1954 – ): A prized member of the SABR family for more than 25 years, Tom Ruane’s broad knowledge and interests have allowed him to contribute to many committees, especially Baseball Records, Statistical Analysis, Biographical Research, and the Biography Project. He received the Bob Davids Award, SABR’s highest individual honor, in 2009. A longtime board member and stalwart of Retrosheet, Tom has been involved in many of its most noteworthy efforts, including the design and implementation of its website. While Retrosheet had already served a valuable role in the research community, it was Tom’s extensively linked site which made it a prized tool for the masses. He led a group of volunteers to create box scores using official dailies and newspaper accounts, an effort requiring painstaking diligence and persistence that has led to Retrosheet having a complete set of box scores dating back to the early 20th century.