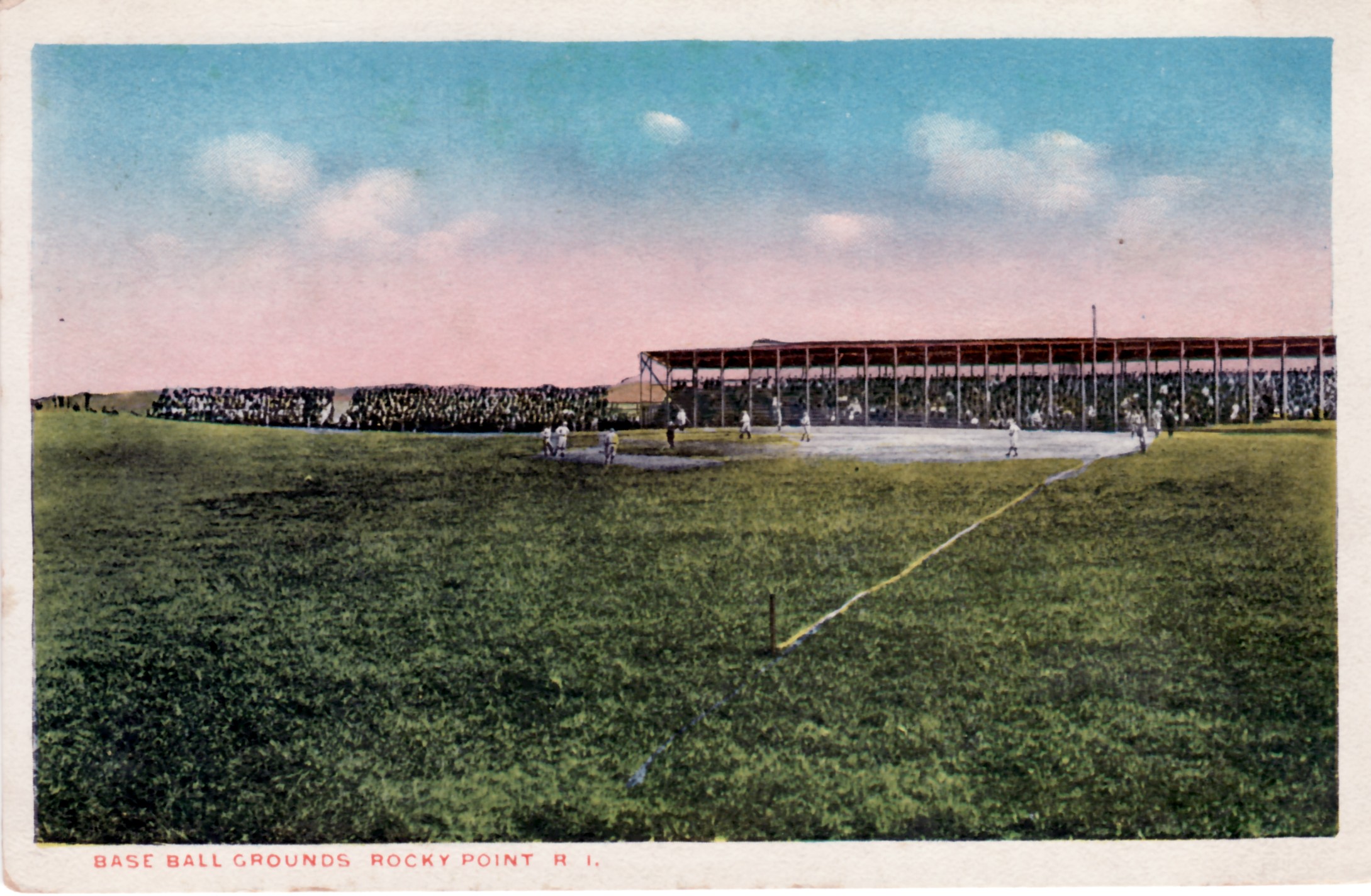 From 1891 to 1917, Rocky Point was the site of dozens of Sunday baseball games hosted by the Providence minor-league team, numerous exhibition games played by major-league teams, and one official National League game in 1903.

The Rocky Point peninsula is located on Narragansett Bay in Warwick, Rhode Island, ten miles south of Providence. The first summer resort at Rocky Point opened in 1847, when visitors could only reach the resort area by excursion boat. When Randall Harrington acquired the property in 1888, he added more amusement activities, including a baseball field, to augment the existing attractions such as the Shore Dinner Hall and a dance hall.

Harrington also operated Rocky Point on Sunday, in contravention of Rhode Island blue laws that precluded many amusement activities on the Lord’s Day, such as professional baseball, drinking liquor, and vaudeville entertainment. “Rocky Point was a tiny island of illicit professional baseball on Sunday within the vast New England ocean of strict Puritan observance of a Sunday day of rest,” the author described the resort’s Sabbatarian status in a 2005 journal article.1 Local police didn’t enforce the Sunday laws due to Harrington’s connections with powerful politicians, who implicitly sanctioned Sunday activities, which made Rocky Point the only Sunday venue for professional baseball in New England before 1900.

The first major-league team to play a Sunday game at Rocky Point was the Boston Reds of the American Association in 1891. The Reds played five Sunday games there between June 21 and July 12. After the American Association merged into the National League in 1892, causing the Reds to disband, major-league activity at Rocky Point slowed down, since the Boston team of the National League had a strict never-on-Sunday policy, not even playing Sunday games on the road where legally permitted (this policy was not lifted until 1903). Some teams laying over in Boston between Saturday and Monday games did travel to Rocky Point for an exhibition game with Providence if there was an open date on the Eastern League schedule.

During the 1890s, Rocky Point was still fairly isolated. Visitors could now also reach the area by train from Providence, not just by water transportation, but they needed to walk a mile from the train depot to the resort. In these early years, there was only a small wooden grandstand at the ball grounds, which seated perhaps 1,000 people, with other spectators standing along the left- and right-field foul lines.2 In 1900, when an electric trolley line was extended from the Warwick train depot to Rocky Point, Harrington anticipated larger crowds at the ballgames, and thus built a larger grandstand. At this time, the baseball field itself was reoriented, to accommodate the larger grandstand and provide better playing conditions so that “the players will not have the sun in their eyes as before.”3

Extant picture postcards indicate that the ball grounds were located on the northern portion of the resort property, with the grandstand near the trolley-line turnaround and the Shore Dinner Hall. The diamond was oriented northeast, with both center and right fields abutting Narragansett Bay.

In 1901, the Boston team in the new American League increased the traffic of major-league teams at Rocky Point, since the Americans were not reluctant to play on Sunday like their National League counterparts, and twice as many visiting teams in Boston could be persuaded to visit Rocky Point for an exhibition game. In 1902, exhibition games began to be played in the cooler months of April, May, and September, not just the warm-weather months of June through August.

On September 6, 1903, the Boston Nationals defeated Philadelphia, 3-2, in the only regular-season major-league game ever played at Rocky Point. To make up rainouts earlier in the year, Boston and Philadelphia were slated to play three doubleheaders on Saturday, September 5, Monday, September 7 (Labor Day), and Tuesday, September 8, before Boston headed off on a road trip for the remainder of the season. Rain ended the first game on Saturday in a tie after six innings and canceled the second game. With no other opportunity to play a game at the South End Grounds, Boston and Philadelphia agreed to play on Sunday at Rocky Point.4

Beginning around 1905, crowds at the Providence ballgames at Rocky Point frequently ranged from 5,000 to 7,500; when the weather was good and the home team fighting for the pennant, attendance could top 10,000 people, with the excess ringing the field.

With such attendance prospects, the Providence team went to great lengths to play as many Sunday games at Rocky Point as possible. For example, to play the World Series champion Chicago Cubs on Sunday, August 25, 1907, in between the Cubs’ Saturday and Monday games in Boston, Providence traveled all the way from its Saturday game in Rochester, New York, and then returned to Buffalo, New York, for a Monday game. Chicago lost the game, but while the Providence team jumped on a train for a long ride to Buffalo, the Cubs players enjoyed their shorter excursion. “After the defeat, they had a plunge in the ocean and then sat down to a special shore dinner,” the Chicago Tribune noted. “The players returned [to Boston] full of beautiful scenery, salt water, clams, and lobsters and no one remembered how the game came out.”5

The advent of the automobile combined with the greater access via trolley made the baseball crowds at Rocky Point increasingly rowdy with each passing year. An ugly incident happened in May 1911 during an Eastern League game between Providence and Rochester, after the two teams had mutually agreed to stop the game at 5:00 p.m. so that the teams could catch trains to their next destinations. However, at the appointed hour, Providence was at bat in the bottom of the ninth inning, down by two runs, with two men on base and just one out. When the umpires, as instructed, called the game at this point, the crowd of 6,000 surged on the field. “Police and players with clubs and bats had to surround Umpires Pender and Murray to protect them from a mob of disappointed spectators,” the Providence Journal reported under the headline “Game at Rocky Point Terminates in Riot.”6

The most famous exhibition game at Rocky Point was the September 27, 1914, game between Providence and the Chicago Cubs. Home run king Babe Ruth pitched for Providence. “Baby [sic] Ruth held the mound throughout the contest, and while he was wild as a broncho, succeeded in holding the Cubs to seven scattered hits and choked five of them off by the strike-out route,” the Providence Journal reported. Ruth didn’t disappoint at bat either, with “his tremendous wallop in the third session clearing the hill in right field by half a furlong and bouncing into the water on the other side.” By ground rule, though, Ruth was credited with only a triple, not a home run.7

By 1917, Rocky Point had an unsavory reputation as a Sunday-only baseball venue, due to the boisterous crowds but also the deteriorating conditions of the baseball facility. Upkeep at the resort declined as Harrington became increasingly ill and other family members, who disliked the idea of owning the resort, started to cut expenses. The last professional baseball game at Rocky Point was played on September 9, 1917. The lease for the baseball facility was not renewed for the 1918 season. Harrington died 13 months later.

The Rhode Island legislature passed a law in 1919 to legally permit Sunday baseball in the state, enabling the Providence team to play on Sunday at its regular ballpark and rendering the Rocky Point baseball grounds obsolete. The two major-league teams in Boston often played Sunday games in New York City, since that state also passed legislation in 1919 to permit Sunday baseball. When not in New York, the Boston teams used other venues in Rhode Island and Connecticut for Sunday exhibition games, before the Massachusetts Sunday law was finally liberalized in 1929.

After being sold by the Harrington family in 1920, the Rocky Point resort, without the baseball grounds, continued to operate for another 75 years as a thriving amusement park, where children rode roller coasters and families ate at the Shore Dinner Hall, until the park was shut down in 1995.

Bettencourt, David. You Must Be This Tall: The Story of Rocky Point Park. DVD. Midway Pictures, 2007.