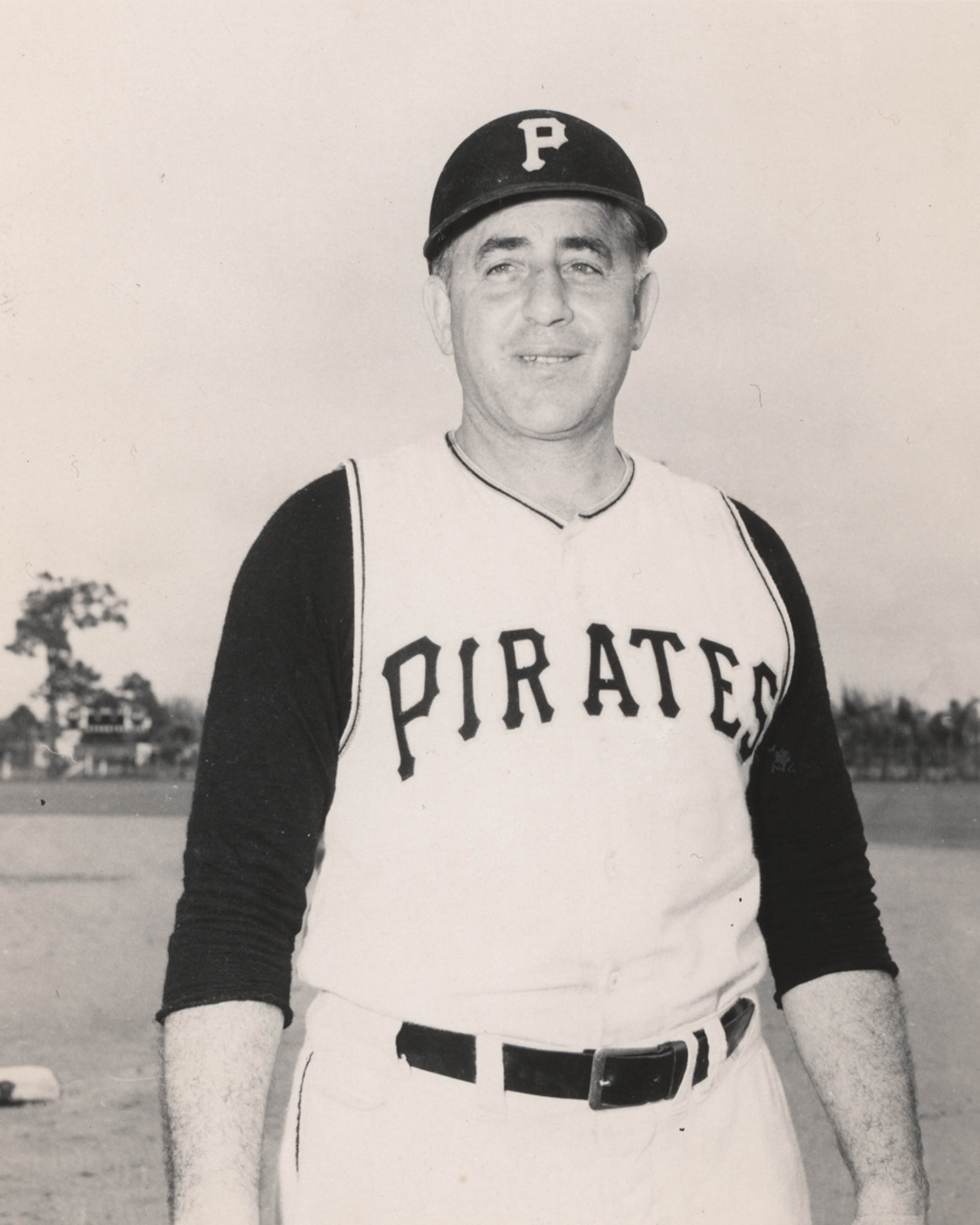 Lenny Levy’s career defies conventional logic. A washout in one year of minor-league D-level baseball (years later, Baseball Digest called him “hardly more than a semipro player”), he fashioned a professional career with the Pittsburgh Pirates that began in 1934 and ended in 1964 with only a break for World War II. He was a player, coach, and scout for the organization through the years. When Bill Mazeroski hit his historic Series-winning home run against the New York Yankees in 1960, the first person to shake his hand was Levy, who was the first-base coach that day.1

Indeed, Levy’s connection with the Pirates went back even further if you take into account his time as a Pirates batboy and a ticket taker at Forbes Field. He may be the only connection bridging the 33-year gap between Pirates’ World Series appearances in 1927 and 1960.

Leonard Howard Levy was born on June 11, 1913, in Pittsburgh, the third of five children born to Louis and Celia Levy. Louis was a produce wholesaler. Since the Levy family lived not far from the Pirates’ Forbes Field, Lenny was often found at the park. He eventually was enlisted as a batboy for the Pirates. When he was old enough, he was given the job of being a ticket taker at Forbes. He held that job for six seasons. In the meantime, he developed into a fine athlete at Taylor-Allderdice High School. He starred not only in baseball but in basketball and football as well. In his senior season, he scored 274 points in basketball, an impressive total in the days of low-scoring basketball games. In 1932, he graduated from Taylor-Allderdice, where one of his classmates was character actor Edward Andrews.2

In 1935 Levy was still working as a ticket taker for the Pirates and was often invited to practice with the team. He was also playing semipro baseball in the Pittsburgh City League, where the year before he had hit .327 as a catcher. Pie Traynor, the Pirates’ player-manager, liked what he saw and signed Levy to a contract. He went to spring training but rather than assign him to a minor-league team, Traynor kept him on the bench as a nonroster player. Levy was considered the Pirates’ third-string catcher. He caught batting practice and generally helped Traynor in whatever duties needed to be done.3

In April 1936 the Pirates sent Levy to the spring-training camp of the Savannah Indians of the Class B South Atlantic League. Levy, a 5-foot-10½, 190-pounder who threw and batted right-handed, made the squad as a backup catcher. By June 5 he had played in 12 games but it was the last one that was the most fateful. In a game against the Columbus (Georgia) Red Birds, Levy was penciled into the lineup as the starting catcher. As the game wore on, some Savannah players became increasingly incensed at the umpires. Finally, Levy, teammate George Lunak, and manager Bobby LaMotte were thrown out of the game. This precipitated what was later described as a “near riot” after the game as Savannah fans spilled onto the field. Umpire Bob Burnett was knocked unconscious with a thrown soda bottle. The blow cracked his skull. His umpiring mate, W.C. “Mutt” Hammond, was also assaulted when a group of fans pinned him up against a fence, punching and kicking him.4

The president of the South Atlantic League, Eugene M. Wilder, fined Levy $10 for his role in the incident. He also suspended teammate Jack Colbern indefinitely and fined him $20 for “inciting the fans.” Those were the only penalties given out. About a month later, National Association president W.G. Bramham upped the fine to Levy to $25.Two fans were sentenced in court to pay $100 fines or serve 30 days in jail.5

Shortly after the incident, with Levy batting only .115, he left Savannah and came back to Pittsburgh. Pirates backup catcher Al Todd had broken a finger so Levy was used to warm up pitchers as a nonroster player. In late July, when another Pirates farm team, the Portsmouth (Ohio) Pirates of the Class C Middle Atlantic League, needed a catcher, he was sent there to help out. He told the Portsmouth Times that Pirates owner William E. Benswanger had personally sent him to Portsmouth. He had a marginally better success in Portsmouth than in Savannah, playing in 20 games and batting .175.6

In 1937 Levy was invited to try out for the St. Joseph Saints of the Western League. But St. Joseph dropped out of the league before the season and transferred Levy to Rock Island, which had taken St. Joseph’s place in the league. However, Levy didn’t make the Rock Island team and again spent the season with the Pirates as a nonroster player.7

In 1938 Levy gave it one last try. The Jackson (Mississippi) Senators of the Class B Southeastern League signed him, but again he failed to make the squad. Again the Pirates gave Levy a uniform, and, though he wasn’t under contract, he traveled with the team as a third-string catcher. On July 2 St. Louis Cardinals manager Frankie Frisch protested a game against the Pirates, contending that there were too many players in uniform on the Pirates bench. Not only was Levy on the bench but so were youngsters Johnny Mize and Andy Lipscomb, a West Point graduate who was a batting-practice pitcher. None was under contract to the Pirates. Mize, not to be confused with the Hall of Famer with the same name, later played a few seasons in the minors. Lipscomb, who was on a leave of absence from the US Army to be with the Pirates, was ordered back to the Army in September. He never played in Organized Baseball.8

From 1938 to 1942, Levy was loosely considered a coach for the Pirates. He traveled with the team and worked in the bullpen, warming up pitchers. He started as a coach under Traynor and then continued when Frankie Frisch took over the Pirates’ helm in 1940. In 1942, he joined the Marines and was stationed in China for most of World War II.9

Levy rejoined the Pirates as a bullpen coach under manager Billy Herman in 1947. He would remain with the Pirates in one capacity or another for the next 17 years. Sportswriter Jonathan Mayo credited him with signing slugger Frank Thomas in 1947.10

In 1951 Levy transitioned to scout, assisting George Sisler with the operation of tryout camps in the Pittsburgh area. Sam Narron took his place as bullpen coach with the Pirates. It was also that year that the film Angels in the Outfield was shot at Forbes Field. Levy had a cameo in the film as an “arguing coach.”11

Between seasons in the 1950s, Levy acted as a booking agent and player for a Pirates basketball team that toured the Pittsburgh area. By 1953 the team, which was now called the Major League All-Stars, was composed of not just Pirates but other Pittsburgh-area major leaguers.12

In 1954, Levy opened a Plymouth-DeSoto automobile dealership called Forbes Field Auto Sales located on Forbes Avenue very close to the ballpark. He operated the dealership until the 1980s. Many of the Pirates bought their cars from Levy through the years.13

On September 3, 1955, Levy married Estyre Rosenberg. For the 1957 season, the Pirates moved Levy back to coaching under Bobby Bragan. When Bragan was fired toward the end of the season, all the coaches, including Levy, were retained under interim manager Danny Murtaugh. Murtaugh was named the permanent manager for 1958 and increased Levy’s duties by naming him the first-base coach.14

By the end of the 1958 season, the weight of owning the car dealership and being a full-time coach wore Levy down. On October 25 he resigned as a coach. The Pirates hired Jimmy Dykes to replace him, but four months later, the Pirates talked Levy into becoming a part-time coach. He didn’t travel with the team and worked only home games. In May 1959 Dykes left the Pirates to manage the Detroit Tigers and Levy was moved back to first-base coach during home games. Frank Eck, an Associated Press sportswriter, wrote that Levy was “one of the most unusual coaches. He never makes road trips. His duties run from such chores as finding Manager Murtagh a fresh cut of plug to retrieving baseballs for the batting-practice pitcher.”15

In reality, Levy was much more than that. He had a sharp eye for detail. Frank Thomas, who from 1953 through 1958 appeared in three All-Star games and was four times in the top 20 in voting for the National League Most Valuable Player award, credited Levy for much of his success. “Levy was a keen student of my form the last couple of years,” said Thomas after he was traded to the Cincinnati Reds in 1959. “He could spot the little flaws that cropped up in a hurry.” Levy, in fact, called himself a “handyman coach” and was quoted as saying that he was “mostly a batting-practice adviser.”16

As a first-base coach, just as in his playing days, Levy was never averse to mixing it up with other teams whenever a dust-up started. On May 25, 1958, he was in the middle of a melee with the Giants. It was mild in comparison to a game on May 3, 1959, when he and St. Louis Cardinals pitcher Larry Jackson got into a “shoving match.” Levy was credited with bloodying Cards manager Solly Hemus’s chin in the resulting brawl.17

Levy coached first base through the 1960 season into the World Series. Thus he was in position to be the first to greet Mazeroski after his home run ended the 1960 World Series. He continued as first-base coach until after the 1964 season. At the end of that season, Murtaugh resigned for health reasons. In a clean sweep after finishing a disappointing seventh in the ten-team National League, the Pirates released all their coaches. The move effectively retired Levy from baseball.18

Levy continued to work at his dealership until he retired from the business in the 1980s. During his retirement, he was inducted into the Western Pennsylvania Jewish Sports Hall of Fame. Eventually, he and Estyre moved to California. On December 27, 1988, Estyre died in Riverside, California. In 1990 Levy was living in Rancho Mirage, California. On February 2, 1993, he died in nearby Palm Desert at the age of 79 of the effects of a stroke and heart problems. He was cremated. He left no survivors.19

This biography is included in the book "Sweet '60: The 1960 Pittsburgh Pirates" (SABR, 2013), edited by Clifton Blue Parker and Bill Nowlin. For more information or to purchase the book in e-book or paperback form, click here.