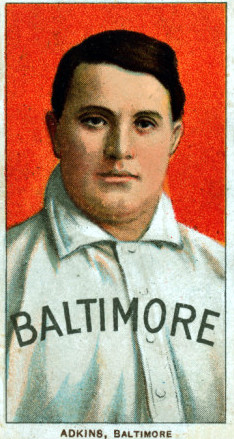 The son of a blacksmith becomes a major-league baseball player, and then a medical doctor. This quintessential American success story belongs to Merle Theron Adkins, who was born in Troy, Wisconsin on August 5, 1872. He was the son of Susan and Emery Adkins. While growing up, Merle was known as Addie or Babe or Tommy.

He played baseball in school and began to excel at East Troy High School, where he was an older teammate of a catcher named Ginger Beaumont, who made the major leagues as a centerfielder for the Pittsburg Pirates (and led the National League in base hits for four seasons in the first decade of the 20th century). Adkins and Beaumont knew each other from playing in school and then for semipro teams around Troy. Both graduated from Beloit College in Beloit, Wisconsin. Adkins used the money he earned playing for a semipro team in Waupun, Wisconsin to finance his college education.i

Beloit’s physical trainer, Jack Hollister, is credited with helping develop Adkins’ pitching talent. The student’s work on the mound caught the attention of Henry J. Killilea, the owner of the Boston Americans ball club, who signed Adkins to his team in 1902. A May 6, 1902, Boston Globe story dubbed Adkins “the best box artist the Midwest has turned out in many years and the mainstay of the Beloit college team,” and said he would report to the team after graduation. In one of his last games as a collegian, Adkins struck out 13 Notre Dame batters. He joined Boston on June 15.

Paul W. Eaton used some colorful language to describe Adkins’ June 24 debut, when he came on in relief of George Winter in a road game in Washington: “Young Adkins, the Beloit College twirler, succeeded him. ‘Tommy’ was guyed at first, as his shape suggests Cupid Childs after a meal of dried apples, water and wind, and his motions were very coochee-coochee. Adkins was an Old Sleuth mystery to the Statesmen and held them down to two hits. He refused to get rattled and his style soon caught the push, who rooted for the kid. Adkins seems to be a Thos. J. Loftus find.”ii Washington won the game, 7-6, despite Boston’s five-run eighth-inning rally. Adkins was 1-for-2 in the game, stranded on base after a single in the seventh.

On June 26, Adkins won against Washington 4-2, earning him a headline in the Boston Globe. He allowed six hits and walked two. At the plate, he was 1-for-4, with a third-inning single, and he scored. The Globe led its game story: “It was a proud day for Adkins of Boston when the game with Washington ended this afternoon, for among those who congratulated the fat boy upon his victory was Senator Spooner of Wisconsin, who occupied a seat in a box with Senator Platt of Connecticut.”iii

Adkins was highly regarded in Wisconsin, wrote editor Worthington of the Beloit Daily News: “Adkins is a college man of the highest type, and is respected here not only for his athletic ability, but for manliness and fine moral character. He left Beloit college only a few weeks ago with the reputation of being one of its best students and the public here appreciates everything good published about the player.”

His next start, on July 2, was a poor one. He only lasted one inning, surrendering three runs in a home game against Washington, which never relinquished its lead.

He was even less successful in the July 8 game against Philadelphia, when he replaced Cy Young in the box – who had, in turn, relieved starting pitcher George Prentiss. Adkins was “pounded all over the lot.” iv The final score was 22-9. It seemed no one could hold back the Athletics that day. The Boston Globe’s Tim Murnane wrote of Adkins: “the student from Beloit college had a hazy sort of an idea that he had been hit with an ax.” Fully 18 of Philadelphia’s 26 hits were “off the fat boy from the west.” Adkins had allowed only one run in the fourth and none in the fifth, but the 12-run sixth came on 11 hits, a walk, and two errors. Murnane concluded, understandably, “The game proved quite conclusively that Mr Adkins has a lot to learn about pitching before he will be able to do anything like good work for the American league.”v

Adkins stood 5-feet-10 ½ inches and his listed playing weight was 220. Sporting Life commented on his body shape with a blunt one-liner in its “American Affairs” column: “Manager Collins should run about 30 pounds off fatty Adkins.”vi His pitching had left a lot to be desired – he’d thrown 20 innings and given up 20 runs (fortunately for his earned run average, only nine were earned runs), in large part due to 30 hits and seven bases on balls.

When the Bostons left for Philadelphia in mid-July, neither George Prentiss nor Adkins joined the traveling party.

Oddly, on July 12 – while the Bostons were in Philadelphia – Adkins pitched in a game at the Huntington Avenue Grounds. He joined the West Quincy team playing against the Dorchesters in a semipro game at the American League park. He entered the game in the seventh inning and was 0-for-1 at bat; West Quincy lost the game, 5-4. Some 2,700 people turned out to take in the game.

In late July, after four more appearances for Boston, and with pitcher Tom Hughes now on the team, Adkins was released. “Too wild and not in playing condition” was the verdict in Sporting Life’s column.vii

He moved to a team in Rockland, Massachusetts, but almost immediately signed with the Milwaukee Creams (a Class A Western League team managed by Hugh Duffy).viii His first game for Milwaukee, at the Lloyd Street grounds, was a six-hit, 3-0 shutout of Peoria. The Milwaukee Sentinel wrote that he was “accorded the greatest ovation that has been extended to any player in years past in this city. The old gladiator for Beloit’s Gold came heralded as a wonder, and he made good in every department of the game. His pitching was without a flaw, he batted in good form, he scored the first run of the game and he was the principal in one of the prettiest bits of fielding ever seen on the grounds.”ix He appeared in 16 games for Milwaukee in 1902. At some point in October, Adkins signed to pitch in 1903 for the New York Highlanders.

He began the ’03 season with New York, but by July 11 he had made his way to Baltimore. He pitched a six-hit, 2-0 shutout of Newark in a road game with his new team.

On September 26, he was recalled to New York, and pitched two games, including his final game in the major leagues, in which he went just three innings, giving up five runs to the Tigers.

Adkins took a position coaching baseball for Johns Hopkins, but on March 17, 1904, he signed with the Baltimore Orioles again. No pitching stats are available for 1904, but in 97 at-bats, he hit for a .278 average. It was an exception; his career minor-league average was .185.

He began to study medicine at Hopkins, and predictably picked up the nickname “Doc.” He married Florence Tragler on October 4, 1904.

In 1905, the second of nine seasons he pitched for the Eastern League Orioles, Adkins had a very good 18-9 record. He joined pitchers Burchell and McNeal in holding out in the spring of 1906, a “strike” in the words of some. The parties arrived at a satisfactory resolution.

He graduated from Johns Hopkins in 1907, but kept right on pitching. One interesting note: manager Jack Dunn protested a July game with Buffalo, on the grounds that the ball had been doctored with oil of mustard to prevent Adkins from throwing the spitball. The protest was not honored.x Adkins was effective nonetheless; he had a 16-15 season in 1906, and became a 20-game winner in 1907 (20-11). He hit his peak with a 29-12 record in 1908, and went 21-19 in 1909. Over the next three seasons, however, he was a cumulative 28-31.

Somehow, Doc Adkins managed to balance his medical practice, coaching, and pitching. As the February 15, 1908 Sporting Life explained, “Dr. Merle Adkins, the Baltimore pitcher, has resigned his position on the house staff of the Union Protestant Infirmary, of Baltimore, to accept the position of base ball coach of Trinity College, Durham, N. C., from February 1 to the latter part of April.” That same year he won 29 games the Orioles. Trinity later became Duke University.

A bizarre incident occurred in a game at Baltimore, on July 14, 1908. In the third inning of the game against Jersey City, Adkins was up to bat, when suddenly umpire Stafford ordered all the Baltimore players back to their positions on the field to get one more out. Adkins succeeded in retiring the man.xi

At times, Adkins was called upon to treat his own teammates, such as when Jack Dunn suffered an injury to his ribs and was reported “under the treatment of Dr. Adkins.”xii

After appearing in only 11 games (0-1) in 1912, Adkins was released. In May 1913, he announced that after he completed his duties as trainer for the Trinity team, he would open a medical office in Durham, North Carolina. He did return to pitching in 1914, for the Eastern League’s Scranton Miners, and appeared in 22 games (won-loss record unknown.)

Finally, medicine became his fulltime profession, and he worked in Durham as a doctor until his death from coronary heart disease on February 21, 1934. The Baltimore Sun reported that he had “added to his already great weight” and had sought diet treatment under a specialist at Johns Hopkins.xiii He’d had a heart attack two weeks earlier and then a series of attacks on his final day. He had been active in the Presbyterian Church and the church choir, and taught a youth Bible class. His wife, Florence, and four sons (Merle, Fenton, Emery, and Tragler) survived him, as did his mother and a sister.

In addition to the sources noted in this biography, the author also accessed Adkins’ player file from the National Baseball Hall of Fame, the Encyclopedia of Minor League Baseball, Retrosheet.org, and Baseball-Reference.com.

ix The quotation from the Sentinel ran in the Boston Globe of August 4, 1902.