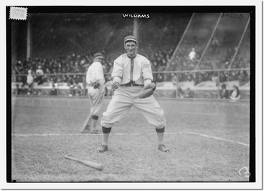 He began his Organized Baseball career in 1906 and 1907 with two years for the Keokuk Indians of the Iowa League of Professional Baseball Clubs. In the Class D league, Williams - who was 24 when he began – hit .247 in 58 games the first year and then was hitting .226 over 99 games in 1907 when he was traded to Terre Haute in the Class B Central League. He hit almost the same (.222) for the Hottentots.

Williams was invited to join the Boston Red Sox for spring training in 1911. He joined the team at Kansas City as the team traveled west toward Redondo Beach, California – their base for the exhibition season this one year. He offered some versatility in his ability to serve both as catcher and first baseman. It was his ability to play first base - where the Sox had more of a need and where Hugh Bradley had suffered a leg injury during the spring – that got him a spot on the team. He’d also played some outfield with Terre Haute. Williams hit well, batting .305 in spring training. Early in the year, several newspapers ran a “baseball note” saying that in “another case of a catcher making good at first base, Alva Williams, who took Jake Stahl’s place, is proving quite a sensation with the Boston Americans.”4

When the regular season began, he had indeed made the team and got off to a good start, hitting over .300 at the end of May, but tailing off as the season wore on. He was 0-for-2 in his debut game, though he worked a walk. Veteran sportswriter Tim Murnane of the Boston Globe wrote, “Williams played a clever game at first.”5 He appeared in 95 games, hitting the aforementioned .239 but drawing 24 bases on balls and thus reaching base 31.4 percent of the time. He drove in 31 runs and scored 36. He’d played in 57 games at first base and 38 as catcher, with nearly identical fielding percentages at each position - .975 at first and .978 behind the plate. He was pretty consistent throughout his seven years in the majors, with a .977 career fielding percentage.

Alva Williams took ill in July 1933 and was hospitalized in Keokuk, Illinois. On July 20, it was announced that a baseball game would be played as a benefit for him at Hamilton, Illinois on the 23rd. As it happened, he died - on that very day - before the game could be played. He was 51 years of age. His mother and son survived him. He is buried at Carthage.

7 Washington Post, February 23, 1912. Delsarte was a method of the day that worked on “improving musical and dramatic expression through the mastery of various bodily attitudes and gestures.” [Dictionary.com]

10 Numerous newspapers ran this story, for instance the Augusta Chronicle of May 5, 1916.