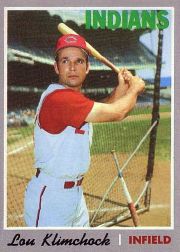 When he stepped to the plate as the leadoff hitter for the Kansas City Athletics on the final day of the 1958 season, 18-year-old second baseman Lou Klimchock was looking for his first major-league hit, not to make modern major-league history. Playing in just his second major-league game, Klimchock achieved both.

On the mound that day for the homestanding Chicago White Sox was 19-year-old Stover McIlwain. A tall, lanky right-hander, McIwain was also making his second major-league appearance, and, as fate would have it, his last. 1

Klimchock picked out a McIlwain offering he liked and drove the pitch into the Comiskey Park right-field stands for his first major-league hit and home run. It was the first time in modern major-league history that a teenager had homered off a teenager.2

Louis Stephen Klimchock was born on October 15, 1939, in Hostetter, Pennsylvania, about 40 miles southeast of Pittsburgh. He was the seventh of John and Ann Klimchock’s eight children. As a child, Lou played sports around the neighborhood with older brother James and younger brother Charles, who would both play professionally in the Chicago Cubs organization. It was clear early on that Lou was the better ballplayer, an all-round athlete who ran track and played football at Latrobe High School, which didn’t have a baseball team. Forced to play only American Legion ball, he nonetheless gave up his other athletic interests to concentrate on baseball after leading his Latrobe Legion team to the district title in 1956. After graduating from Latrobe High in 1957, he was signed by scout Bruno Betzel to a contract with the Kansas City Athletics.3

Immediately after signing, Klimchock reported to Kansas City’s Class D farm club in Grand Island, Nebraska, where he performed respectably for a 17-year-old, with a .273 batting average in 39. games as Grand Island won the Nebraska State League championship.

The 1958 season was a special one for Klimchock. Playing in his first full professional season with Pocatello of the Class C Pioneer League, Klimchock led the circuit in batting average (.389), runs, hits, slugging percentage, and total bases, and was named the league’s Rookie of the Year, All-Star second baseman and MVP.

After Pocatello wrapped up its season, the Athletics rewarded Kimchock by calling him up for their last series of the season, against the White Sox in Chicago. He made his major league debut on September 27, going 0-for-5 but scoring the winning run after reaching on a fielder’s choice against future Hall of Famer Early Wynn.

Greeted at home plate the following day after his trot into history by another guy who knew a thing or two about hitting home runs, centerfielder Roger Maris, Klimchock added another hit in the game to finish 2-for-5 in the A’s season-ending 11-4 loss to the Chisox.

The 1959 season started with Lou skipping three levels to Shreveport of the Double-A Southern League. The rapid advancement didn’t seem to bother him, as he dominated once again despite the stiffer competition. Klimchock led the league in at-bats, hits, and doubles, was second in total bases and fourth in batting average (.315). He led all second baseman in putouts, assists, and double plays and once again was named Rookie of the Year and All Star keystoner.

The Athletics recalled Klimchock on September 9, and he started the final 15 games of the season at second base, ending the season on a hot streak in the Athletics’ final four games, in Cleveland. He went 5-for-9 in a doubleheader on September 25, then had two hits in each of the next two games, including a three-run homer off the Indians’ Herb Score on the final day of the season.

Klimchock started the 1960 season with Triple-A Dallas but suffered a leg injury that cost him much of the season. He did manage to see Kansas City briefly in July, going 3-for-10 as a pinch-hitter. As down as the 1960 season was, 1961 was the opposite: Klimchock won the Athletics’ second-base job in spring training. He played in 42 first-half games, but after a mid-July slump dropped his average almost 30 points, he was sent to Double-A Shreveport, where he finished the season.

On December 15, 1961, the Athletics traded Klimchock and pitcher Bob Shaw to the Milwaukee Braves for catcher Joe Azcue, third baseman Ed Charles, and outfielder Manny Jimenez. Kansas City farm director George Selkirk, the former Yankee outfielder, was a Klimchock supporter and believed he could play second base every day in the major leagues. “He didn’t want to trade me,” Klimchock recalled, “but felt it was a good opportunity for me to play regularly.” Things didn’t exactly turn out that way for Klimchock; while he did spend some time with Milwaukee during the 1962 season, he was with Triple-A Louisville most of the season. The season wasn’t a total waste, though, as Louisville won the International League championship.

Before the 1963 season began, Klimchock found himself on the move again, this time to the Washington Senators on a conditional waiver claim. He broke camp with Washington and appeared in nine games before being returned to the Braves, who sent him to Triple-A Denver. Klimchock spent three months in Denver before being recalled by Milwaukee on July 29. During his time at Denver he played well enough to be named to the Pacific Coast League All-Star team despite playing just 81 games for the Bears. His .352 batting average led the league at the time of his recall; at season’s end it was fourth highest. His .693 slugging average and 1.020 OPS (on-base percentage plus slugging percentage) did end up as league-leading totals.

Klimchock spent all but ten games of the 1964 season in Denver, where he won his second career league MVP. He led the league in hitting (.334), doubles, total bases, and RBIs, and finished second in triples. He led league third basemen in fielding average, putouts, assists, and double plays and was a Triple-A All-Star.

Klimchock made the Braves roster out of spring training in 1965 as a utility player. He played sparingly during the first half of the season before being sent to Triple-A Atlanta. On September 25, the Braves sent Klimchock and infielder Ernie Bowman to the New York Mets as part of an earlier trade for outfielder Billy Cowan. Outside of a five-game appearance with the Mets, Klimchock spent all of the 1966 season with Triple- Jacksonville, then once again found himself packing his bags with Ernie Bowman. This time, the Mets sent the pair off to Cleveland for pitcher Floyd Weaver.

For the first time since 1958, Klimchock made no major-league appearances in 1967, spending the entire season with Triple-A Portland. He spent most of 1968 with Portland as well, appearing in 11 games with the Indians.

With 1969 being an expansion year (the new teams were the Kansas City Royal, Seattle Pilots, Montreal Expos and San Diego Padres), and with another 100 or so major-league jobs now available, spring training carried a different purpose for the now veteran Klimchock. He played well enough to earn the Indians’ second-base job, but suffered a broken hand when he was hit by a pitch during an exhibition game on March 17. When he was healthy enough to play, Klimchock reported to Portland to get into game shape, and was recalled by Cleveland on May 26. He played pretty regularly at second base for the next six weeks or so, then moved over to third base when Max Alvis suffered a season-ending injury. Klimchock played a career high 90 games for the Indians, leading the team in hitting at .287 while walking more than he struck out.

During previous offseasons Klimchock had played some winter ball in Puerto Rico for Arecibo. After the 1969 season the opportunity arose for him to return there, as a player-manager. While Klimchock was in Puerto Rico learning the ropes as a manager, back in Cleveland the Indians were working on upgrading their roster. Alvin Dark had the dual role of manager and general manager. Klimchock was thankful for the opportunity manager Dark had given him during the season to play and prove, especially to himself, that he was capable of playing every day in the major leagues. On the other hand, as the GM, Dark was responsible for making the Indians better by any means possible, and on December 12 he attempted to do just that, sending pitcher Luis Tiant and reliever Stan Williams to Minnesota for a package that included a 24-year-old utility player, Graig Nettles. Nettles was immediately named the Indians’ regular third baseman, which pushed Klimchock out of his starting job.

Klimchock opened the 1970 season in a reserve role with the Indians. He remained with the team for most of the season, but continued to struggle as a part-time player. The Indians released him on August 11. He made his final major-league appearance in the same place as his first: Comiskey Park in Chicago. On August 2, Klimchock pinch-hit and was intentionally walked.

After his release, Klimchock signed with the Washington Senators and played 20 games with Triple-A Denver. He spent the 1971 season in Denver as well, his last as an active player.

Klimchock returned to the Indians’ organization in 1972, spending that season and 1973 as manager of the Indians’ team at Reno in the Class A California League.

As was the case with most players in those days, offseason employment was a requirement to keep food on the table and a roof over their heads. In addition to his occasional forays to play winter ball in Puerto Rico, Klimchock at various times worked for the Rolling Rock brewery, sold cars and real estate, and worked in construction. After the 1973 season with Reno, Klimchock returned to Denver with his family and took a job with the Coors Brewing Company, where he worked for 12 years. After that he moved to Phoenix and took a job with the Coca-Cola Bottling Company.

In 1989 Klimchock was named to the board of directors of the newly formed Major League Alumni Association. He retired from Coca-Cola in 1990.  Lou served as the Arizona Fall League's Marketing Director working with President Mike Port and Tim Purpura during the first two seasons of its existence in 1992 and 1993.   As of 2013 had spent 23 years working on behalf of the Alumni Association, raising funds for youth baseball in the Phoenix area and for organizations like the Baseball Assistance Team and the Association of Professional Ball Players. The latter two aid those in the baseball family who have come up against hard times, and isn’t limited to helping just former major leaguers. They assist former minor leaguers, Negro Leaguers, coaches, umpires, scouts, clubhouse and front office personnel, and widows of members who have left medical expenses behind.

Klimchock also got back into uniform as the hitting coach for the Sonoran Explorers of the independent Freedom Pro Baseball League, based in Scottsdale, Arizona.

Lou and his wife, Jeri, have three daughters, Carrie, Laurie, and Luann, and two grandchildren. The baseball gene was passed to his grandson Mitch Nay, a third baseman who was drafted by the Toronto Blue Jays in 2012.

Through his connection with the Alumni Association, Klimchock has also been a friend of SABR, often providing players to speak at local meetings, and has even shown up himself at times. As part of a mutually beneficial relationship, the local Flame Delhi Chapter has provided members as volunteers to assist with Alumni functions.

3 Betzel pitched five major-league seasons with the St. Louis Cardinals and is a member of the International League Hall of Fame.