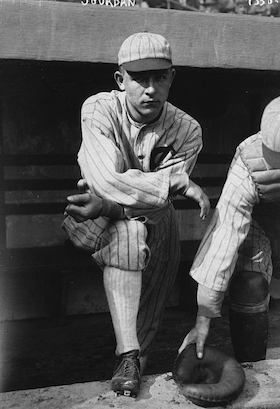 Baseball’s greatest tragedy, the 1919 Black Sox Scandal, ruined the careers of some ballplayers, but it also gave opportunities to others. Some, notably Bibb Falk, took advantage of the opportunity and went on to long careers. Ted Jourdan did not. In the words of the Book of Daniel, he was tried, and found wanting.

Theodore Charles “Ted” Jourdan was born in New Orleans on September 5, 1895, the son of Thomas Jourdan, a foundry machinist of Irish descent, and his wife, Catherine Will. Ted attended the Jesuit High School in New Orleans, the same school that produced big leaguers Connie Ryan, Rusty Staub, and Will Clark. In 1913 he graduated from Loyola University of New Orleans with a B.S. degree, earning special honors in bookkeeping. The well-educated Jourdan also starred at first base for Loyola’s baseball team.

After a year playing semi-pro ball for the local Eberhards, he left for the Middle Texas League (Class D). Playing for the Brenham and Taylor clubs, Jourdan was labeled “the best all around first baseman in the Middle Texas League,” a “hard hitter” but “awkward in fielding his position.”1 The league folded in June, and Jourdan returned to semi-pro ball in New Orleans. In July, the Winston-Salem Twins of the Class D North Carolina State League brought Jourdan in.2 The 20-year-old lefty hit .258 for the Twins, but his play evidently left something to be desired. The Twins sold him to St. Joseph of the Western League for $250, with management explaining that while “the big fellow” (he was 6-0, 175 lbs.) was “a good player,” he had “a streak of laziness in his system.”3

But at St. Joseph’s he thrived, batting .314, and was rated “the best prospect in the Western League;”4 “one of the prize first sackers of the minor leagues … [possessing] a good throwing arm … [and] a batting eye.”5 On August 7, Chicago White Sox secretary Harry Grabiner signed him. Good hitting but slow fielding Jack Fournier, the Sox’s regular first basemen, was in a prolonged slump (he hit only .240 that year) and the Sox sought a replacement. Brought up in September, after St. Joseph’s season ended, Jourdan got into only three games with the Sox, debuting on September 18.

It appeared that Jourdan was slated to start at first for the 1917 Sox, a pennant-contending team that finished second in 1916. However, in the offseason the Sox purchased Chick Gandil from Cleveland. In the eyes of White Sox management, the veteran Gandil, a slick fielder and reliable RBI man, solved their first base woes, and they shifted Jourdan to the bench, although in spring training Jourdan “hit consistently when used.”6 Jourdan had only 34 at-bats for the 1917 Sox, hitting a meager .147. He started one week in May while Gandil recovered from a cold, but rode the bench thereafter.7 Jourdan had another abbreviated year in 1918, when he got in only seven games before entering the U.S. Army. As with many other players, Jourdan never saw action, instead served as captain of the [New Orleans] Jackson Barracks baseball team.8

In 1919, Gandil was entrenched again at first base, with Jourdan again unable to beat him out in spring training. The Sox wanted him to be “more aggressive”9 (a variation of the “lazy” rep in the minors), and farmed him out to Minneapolis of the American Association. Jourdan played the entire year there, batting .302 with the Millers. His stock was high with the local newspapers which described him as: “a good sticker, a fast and heady base runner, and one of the smartest chaps performing in the league. ... big league material” who unfortunately sometimes gave the “impression of sulkiness.”10

The 1920 season looked to be Jourdan’s breakout year with the Sox. Flush with crooked money from throwing the 1919 Series, Gandil retired, and the Sox handed the first base job to Jourdan. The Sox believed that Jourdan “does not begin to compare with Chick”—especially in fielding, since Gandil had committed only three the previous season, compared to Jourdan’s 32 with the Millers—but they hoped Jourdan would hit nearly as well.11 Jourdan started Opening Day for the Sox and held first base through the beginning of June. While praised for his “nifty” fielding,12 he struggled at the plate, hitting .240 with no home runs and only eight RBIs.

On May 31 he wrenched his ankle while stepping on the first base bag and was sent home to recover.13 The Sox gave the first base job to John “Shano” Collins, a veteran outfielder-first baseman, who hit .303 that year and .310 the remainder of the season. Jourdan never reclaimed his post after that. He started only one game after June, a meaningless late season contest. In the judgement of his Sox teammates, Jourdan was “a remarkably fine fielder, but his hitting was very weak.”14

In November 1920 the Sox traded Jourdan, backup catcher Bird Lynn, and cash to the Salt Lake Bees of the PCL, for the Bees’ first baseman, Earl Sheely. Sheely had hit .373 with power (the power Jourdan lacked) in 1920, and to the Sox he appeared the better option.15 Indeed, he was. The new acquisition hit .304 and .317 for the Sox the next two years, with some power. Jourdan never made it back to the majors.

Jourdan batted .309 for Salt Lake in 1921, all the while hobbled with “charlie horses . . . he has taken part in several games where a hospital bed would have been more appropriate for hm.”16 That winter Salt Lake sold the “popular” Jourdan to the Minneapolis Millers, his former team.17 He manned first base for the Millers the next five seasons (1922-26). Although he averaged over .300 with the Millers,18 it appears management and he didn’t get along, with Jourdan often holding out for more money. In 1923 he was rumored to be “dissatisfied and will be placed on the market.”19 The following year Minneapolis loaned him to Milwaukee for the first two months of the season.

Midway through the 1926 season Minneapolis loaned him to Class A Birmingham, where he played through 1927.20 Stints at Jersey City (1928-29), Lake Charles (1929), Dallas, Little Rock, and New Orleans (1930) followed. He broke his leg 14 days into the 1928 season and despite hitting .364, Jersey City released him.21 He returned to Jersey City next year and the team made him manager—a mark of how much he was respected.22 The New Orleans Pelicans released him in 1930, a move one local newspaper found “a hard one to dope” because, in the paper’s (perhaps hometown biased) opinion, Jourdan was “the finest first sacker in the league.”23 In 1931 he settled in as player-manager of the Class D Monroe (Louisiana) Twins in the Cotton States league.24 As the regular first basemen in this, his last profession season, he batted .310 and was named to the league All-Star team.25 In parts of four major league seasons, he averaged .214. In 14 minor league seasons, he accumulated over 1,600 hits and a batting average around .300.

After his playing career, he returned to New Orleans and worked as a bookkeeper. Keeping active in baseball, he umpired and became a fixture in the Crescent City’s “old timer” games.

Ted Jourdan died in New Orleans on September 23, 1961, of a heart attack. He is buried in Hope Mausoleum, New Orleans, along with his wife, Myrtle (Tatford) Jourdan.26

10 “Jourdan One of Best Players in Double A,” Louisville Courier-Journal, September 5, 1919.

12 Jack Veiock, “Base Ruth Hits Pair of Homers,” New Castle News, May 12, 1920. Despite the praise, Jourdan’s fielding average (.982) and range factor were both below league average.

18 During his 14-year minor league career, Jourdan had his best year in 1921 with AA Minneapolis, hitting .312 (with 15 homers, a career high). Incomplete numbers yield a .294 lifetime minor league average for him. Baseball-reference.com does not show a batting average for him in 1924. However, in August of that year he was batting .313. See the Cleveland Plain Dealer, August 10, 1924.

20 See Harry Martinez, “Spoutings in Sportdom,” New Orleans Times Picayune, August 16, 1926, for the complicated story of this loan out.