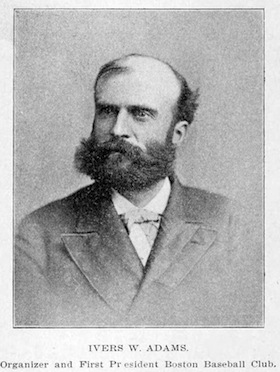 As the first president of the Boston Baseball Association in 1871, Ivers Adams was the father of professional baseball in Boston. The Association’s baseball team was a charter member of the National Association during its inaugural season in 1871, played five seasons in that league, and then became the Braves franchise in the National League.

Ivers Whitney Adams was born on May 20, 1838, in Ashburnham, Massachusetts, the oldest of six children of Walter and Sarah (Whitney) Adams.1 His father worked as a carpenter in rural Ashburnham, 50 miles northwest of Boston. Adams was educated in the Ashburnham public schools, but never attended college. Although Adams came from humble origins, he became a wealthy man in the city of Boston.

Adams left Ashburnham in 1857 to pursue a business career in Boston. Initially, he was a clerk at Houghton, Sawyer & Company, a dry-goods firm. In the mid-19th century, a clerk was an apprentice businessman, who worked for very low pay to learn the business in hopes of eventually becoming a highly compensated partner in the business. Adams left Houghton, Sawyer in 1860 to be a clerk at John H. Pray, Sons & Company, which specialized in carpets.2 In the mid-1860s, Adams, still single, lived in a boarding house on Cambridge Street in downtown Boston near his work.3 Since the main office of John H. Pray, Sons & Company was at 192 Washington Street, Adams was an occasional spectator at the afternoon baseball games played on the nearby Boston Common ball field by the Lowell Base Ball Club, one of the three top amateur teams in the city.

On October 4, 1866, Adams married Sarah Shepard.4 They lived in a large house with several live-in domestic servants at 2 Delle Avenue in suburban Roxbury, which had recently been annexed to the city of Boston and renamed the Boston Highlands neighborhood.5 Adams was still a clerk at John H. Pray, Sons & Company, but he was part of the emerging white-collar middle class that filled the void between the rich and the poor social classes.6 Adams still watched a few ballgames played on the Boston Common on his way home from work, since he commuted to work from the Roxbury Crossing station on the Boston & Providence railroad line, whose Boston train terminal was adjacent to the Boston Common.

Before 2,000 spectators on the Boston Common on June 10, 1869, the all-professional Cincinnati Red Stockings, led by Harry Wright, trounced the amateur Lowell club, 29-9.7 With such a large attendance, Adams saw a bright future for professional baseball in Boston and began to plot how to establish a professional team in the city.8 Adams was not just an avid sportsman, but also a savvy businessman. He realized the potential that a professional baseball team could do for Boston’s business community, to elevate Boston into the same realm as New York City and Philadelphia as one of America’s leading cities that local businessmen, including Adams himself, could leverage for economic gain. It took Adams nearly two years to realize this goal and form a company to sponsor a professional baseball team.9

Adams had to first locate a new playing ground for Boston baseball teams. The Boston Common, once marginalized land next to the Charles River, was now valuable public land as a landfill project, begun in 1866, filled in the Charles River basin to create an elite neighborhood now known as the Back Bay. The city was issuing fewer permits to play baseball on the Common, to reduce the noise and activity that might impede the sale of house lots in the Back Bay. On June 24, 1869, the Lowell club began to play its games at the new Union Grounds, located two miles from the Boston Common on a five-acre parcel in Roxbury along the Boston & Providence railroad line.10

In 1870, when the Cincinnati team returned, 5,000 spectators jammed the Union Grounds on June 4 to watch Harry Wright’s team crush the Harvard College team, 46-15.11 Adams then seriously pressed forward to establish the first professional team in Boston. In November 1870, when the Cincinnati team was being disbanded, Adams recruited Wright and his brother George to form the nucleus of the new Boston team.12 After Adams made Harry Wright the captain of the team, Wright recruited several other highly skilled ballplayers to complete the team by the time of the ballclub’s first organizing meeting, on January 20, 1871, at the Parker House.

Adams was the leader of a band of five men, all in their 30s, who served as the officers and directors of that first professional baseball club in Boston. Adams, 32, was the president; Wright, 36, was the secretary; John Conkey, 31, a broker, was the vice president; Harrison Gardner, 30, a dry-goods merchant, was the treasurer; George Burditt, 38, an accountant, was the fifth director, in addition to the aforementioned four officers.13

At that founding meeting of the ballclub, Adams initiated a number of policies that were the foundation of Boston professional baseball for a quarter-century. First, he established the club as a corporation, which required that he marshal a bill through the state legislature.14 Importantly, the new baseball club was called Boston, after its city location, not by a nickname that most other teams of the era used, such as the Mutual club in New York or the Athletic club in Philadelphia. Adams used his business connections to raise $15,000 in capital by selling shares in the new corporation, convincing prominent local merchants such as Eben Jordan (founder of the department store Jordan Marsh), Charles Pierce (owner of the Baker’s Chocolate factory and future mayor of Boston), and John F. Mills (proprietor of the Parker House hotel).15 The capital enabled Adams and Wright to immediately field a championship-caliber team.

Adams also established the strategy of attracting spectators to watch the baseball games: “shareholders, members of the club and those of our friends who may take sufficient interest in the success of this enterprise.”16 The operative word in the strategy was “friends,” who were businessmen in the same emerging upper middle-class social status as the club’s officers and members (200 people who purchased season tickets). The laboring class was not part of the target audience. Adams bought into Wright’s philosophy that the admission price to ballgames should be 50 cents, not the 25-cent fee that the Lowell club had been charging.17 Patrons could purchase game tickets at the Wright & Gould sporting goods store, co-owned by George Wright.18

The strategy for the ballgrounds was also devised by Adams. He decided to rent the land where the Union Grounds were located and build “a covered building capable of seating about a thousand people,” with reserved seats for the shareholders, members, and friends.19 Bleacher seating along the baselines would come a few years later. This location later was known as the South End Grounds, where the Boston Braves franchise played its games until 1914.

Behind the capable leadership of Harry Wright, the Boston team finished the 1871 season in second place in the National Association standings, runner-up to the champion Athletic club of Philadelphia. Adams was re-elected president for the 1872 season; however, after serving as the club president for just ten months, he declined a second term since “his business engagements would not permit of his giving the proper time to the duties of the office.”20 Three weeks after stepping down as club president, Adams resigned from his position at John H. Pray, Sons & Company to start his own firm.21 His role in establishing the ballclub had helped Adams achieve the next step in his business career; cynics would say he used the ballclub for personal gain.

However, after the Great Boston Fire of 1872 destroyed the buildings and inventory of the John H. Pray, Sons & Company, Adams returned to the carpet firm to rebuild its business. He was now part of ownership, the only nonfamily partner in the management team that had been exclusively John A. and William H. Pray.22 His promotion from clerk to partner was lucrative because the demand for floor coverings escalated in Boston during the 1870s. Carpets were needed by residents in the new upper-class Back Bay neighborhood, but the rise of middle-class “streetcar suburbs” within five miles of downtown Boston stimulated carpet demand even more. The middle class sought to emulate the “trappings of gentility” of upper-class household furnishings, as “the carpet, the sofa, and the piano [were] all artifacts of the new middle-class way of life” in the late 19th century.23

While Adams was making money selling carpets, the Boston baseball team captured four consecutive National Association championships, from 1872 through 1875, and then two National League pennants in 1877 and 1878. Business was booming in Boston, as the baseball success had indeed helped turn Boston into one of America’s leading cities, Adams’s original goal. By the time the Boston team had won its sixth title in seven years, Adams was well on his way to becoming a millionaire as a partner at John H. Pray, Sons & Company.

In 1882 Adams retired from John H. Pray, Sons & Company as a wealthy man.24 At age 44, he never had to work another day in his life; he, his wife, Sarah, and their five children (Alfred, Clara, Ivers S., Walter, and Mary) could live a life of leisure.25 They moved from their home on Delle Avenue to a more upscale neighborhood in the Grove Hall section of Dorchester, building a huge house at the corner of Washington Street and Columbia Road.26 Adams also purchased a fishing ground on the shores of the Nepisiguit River in New Brunswick, Canada.27 He continued to dabble in the business world as a member of the board of directors at the American Net and Twine Company, the firm his father-in-law, James S. Shepard, had founded to manufacture cotton-twine fish netting to displace hemp twine.28

Adams rarely was in the baseball spotlight after 1871, but he did occasionally attend get-togethers. On June 21, 1897, he was a guest at a dinner given by George Wright for a touring baseball team from Australia.29 On September 24, 1908, he spoke at a postgame dinner following an old-timer’s game played at the Huntington Avenue Grounds.30

In his later years, Adams donated funds to his hometown of Ashburnham, to establish a water system and to erect a statue that depicts a young boy walking to school.31

“Organization of the Boston Club as a Corporate Company,” Boston Daily Advertiser, December 8, 1871.

US Census Bureau, federal census records for decennial years from 1860 to 1910.

7 Boston Herald, June 11, 1869. Of the three games Cincinnati played with Boston teams in 1869, the June 10 game was the only one played at the Boston Common. In the other two games Cincinnati handily defeated the Tri-Mountain club (40-12) on June 11 in Brighton and Harvard College team (30-11) on June 12 in Cambridge.

9 “Organization of the Boston Club as a Corporate Company,” Boston Daily Advertiser, December 8, 1871.

11 Boston Herald, June 6, 1870. All three games that Cincinnati played with Boston teams in 1870 were played at the Union Grounds. On June 6 Cincinnati defeated the Lowell club (17-4) and on June 9 they defeated the Tri-Mountain club (30-6).

14 “Organization of the Boston Club.”

20 “Organization of the Boston Club.”

21 Boston Daily Advertiser, January 2, 1872. A small partnership notice read: “The interest of Ivers W. Adams in our business ceases from this date. Dec. 30, 1871. John H. Pray, Sons & Co.” Adams also had no occupation associated with his listing in the 1872 Boston City Directory.

31 Boston Globe, May 20, 1912, and October 13, 1912. The statue still stands today at the corner of School and Main Streets, near the entrance to Cushing Academy, a private school.