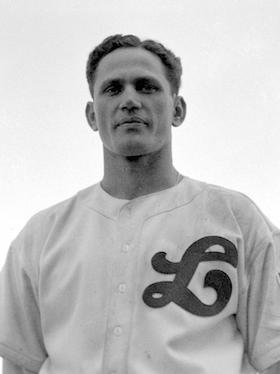 Outfielder Andy Gilbert's time in the majors was very brief, bracketing the World War II years. He played in six games for the Boston Red Sox in September 1942 and two games in the first few weeks of the 1946 season. In between, he served in the Army Air Corps for three full years. During his brief tenure with the team, he recorded one base hit, one run batted in, one run scored, and handled all six outfield chances without an error.

Gilbert was of Slovak heritage. The family name was Gibart originally, and both parents came from what was then called Austria, father Mike arriving in America around 1897 and mother Meri Dirga Gibart around 1900. The first five children in the family were all boys, followed by two girls. Andrew Gilbert was the fifth of seven children in the family at the time of the 1920 United States census. He was born on July 18, 1914, in Bradenville, Pennsylvania, about 40 miles east of Pittsburgh and within a mile of Latrobe.

Mike Gilbert was a coke drawer in a coal works. With the demise of the Austro-Hungarian empire, the 1930 census gave the Gilbert parents' country of origin as Czechoslovakia. They seem to both have had their roots in Jastreb.

Andy grew up in Bradenville and attended the elementary schools there, then graduated from Derry Township High School. He played semipro ball in Whitesburg, Kentucky, in 1936.1

He wrote that he had started in professional baseball, "signed by Fred Hunter – Boston scout while playing Semi-pro in Jenkins, Kentucky. 1937."2 Frederick "Newt" Hunter had been a first-baseman with the Pirates in 1911, the highpoint in a career which began in 1903 and ran through managing in 1925.

The Red Sox assigned Gilbert to their farm club at Canton in the Class-C Middle Atlantic League. The Canton Terriers won the pennant, but Gilbert only played there for the early weeks of the season. On May 10, Canton sent him to Mansfield, Ohio, to get more experience at Class D in the Ohio State League. Playing second base, Gilbert was in 55 games, batting .351 and leading the league in stolen bases with 33. "I stole bases Pepper Martin style, sliding in head first," he said.3 He was exhibiting real promise until the July 29 game when he slid headfirst into second base and broke his neck. The catcher's throw "hit me behind the ear and it made me lose control of my body, I hit the second baseman in the leg and crushed two vertebrae."4 He was in a cast for six months.5 At first, it was thought that he would never play baseball again. The Mansfield club held a benefit game on an off day on September 1, hosting the Canton Terriers. All proceeds were donated to Gilbert.6

Not only was Gilbert able to return to baseball in 1938, but he played in 118 games, for Danville in the Class-D Bi-State League, hitting 18 homers with a .335 batting average. He more or less matched the mark in 1939, again hitting 18 home runs, with a .324 average in 136 games for the Clarksdale Red Sox in the Class-C Cotton States League.

Gilbert stood an even six feet tall and is listed at 203 pounds. A Boston Red Sox press release some years later, in March 1946, said he was "built like a fireplug."

Class-B ball proved more of a challenge, when he played for the 1940 Rocky Mount Red Sox (Piedmont League) – with a .254 average and 14 homers in 107 games. He'd missed five weeks during the course of the season due to back surgery, apparently caused by tripping over a sprinkler in the outfield.7 He suffered a broken wrist in his minor-league years at some point, too.8 He played for Scranton for most of 1941, hitting .280 in the Class-A Eastern League. On July 29, the fourth anniversary of his broken back, he suffered a dislocated right shoulder. His teammates gave him the nickname "Humpty Dumpty."9 At the very end of the season, he appeared in five games for the Louisville Colonels. Gilbert married Helen Milvak in January 1942. That year he played 153 games with Louisville, both at first base and in the outfield, batting .298 and driving in 83 runs. His 19 triples led the league. After the American Association season was over, Gilbert was brought up to the Boston Red Sox.

He had his major-league debut on September 14 in Chicago, a late-inning replacement in center field. He appeared in five games, but had yet to get a base hit in his nine plate appearances. In his final game of the year, facing the New York Yankees at Fenway Park on September 27, Gilbert collected his first hit and his first RBI in a 7-6 Red Sox victory. His single was the fifth of five in the three-run bottom of the second, and his sacrifice in the sixth help set up the seventh run, which came in on a hit-by-pitch. There was a large crowd at the game, including some 1,042 servicemen and another 3,251 fans who had earned free admission by bringing scrap metal to the game for the war effort – more than 46,850 pounds of it.10

He had been classified 1-B in the draft, but while playing with the Red Sox in September, he let it be known that he was "anxious to go" and the Boston Herald's Bill Cunningham wrote, "He'll probably be in the Navy by spring."11

The Red Sox played him some at third base in the springtime, and in right field. He made the team out of spring training, and when U. S. President Harry Truman threw out the ceremonial first pitch in Washington to kick off the first season of postwar baseball, it was Andy Gilbert who caught the ball "after a wild scramble." He had the president sign the ball, and then said to Truman, "Thanks a lot, pal."12 It was the last highlight of his time in the big leagues.

The 1946 Red Sox proved to be a juggernaut, boasting a 20-3 record as of May 9, the day Gilbert was sent down to Louisville. Gilbert had appeared in two games for the 1946 pennant-winners, as a pinch-hitter who played late-inning center field on April 24 and as a pinch-runner in the May 7 game against the St. Louis Browns. He couldn't have known it at the time, but they were his last two games in the major leagues. His record today shows him with a career .083, with the one base hit and one RBI from 1942.

Louisville outrighted him to Toledo in December. He spent 1947 with Toledo and then Minneapolis, where he also played in 1948 and 1949. Minneapolis was in the New York Giants system, and Gilbert spent the next 30-plus years working in the Giants' system. He had a good season in 1948, but fell off sharply in '49. He was a player/manager for the Class-D Springfield Giants (Ohio-Indiana League), where he hit over .380 in both 1950 and 1951. (He even pitched in 11 games in 1950.)

He managed Giants teams in Muskogee, Danville, Johnstown, and Muskogee again through 1957. The last time he appeared in more than one game as a player was 1955 in Danville. From that time on, Gilbert managed. He had a lengthy stint from 1958 through 1965 managing the Springfield, Massachusetts, Giants, with the exception of 1963, when he was manager for the Tacoma Giants in the Pacific Coast League. Springfield had won the pennant in 1959 and 1961; Gilbert was "manager of the year" in 1961. Then it was Waterbury for 1966 and 1967, and Amarillo for 1968 through 1971, with first-place finishes in '69 and '71.

In 1972, Gilbert returned to the major leagues as a coach for the San Francisco Giants, the first two years in the bullpen and the second two years as bench coach.

Back to minor-league work with Fresno, and then two-year stints in succession with Waterbury again, Shreveport, and Savannah. After the 1982 campaign with Savannah, the 67-year-old Gilbert left managing.

After baseball he made his permanent home in Derry Township, took a position as assistant coach at St. Vincent College, and was active with the Latrobe Little League. He was a member of the Latrobe Family Church, the American Greek Catholic Beneficial Society, and the Elks (BPOE Lodge 907 of Latrobe.)

He died in the emergency room of Davis, California's Sutter-Davis Hospital, on August 29, 1992. The cause of death was a massive pulmonary thrombosis and acute respiratory failure. He had been suffering from Alzheimer's disease. Gilbert was predeceased by his wife, who had died six months earlier, and two brothers. He was survived by daughter Joanne Gilbert Owens, two brothers, three sisters, and two grandchildren. He is buried at St. Vincent Cemetery, Latrobe, Pennsylvania.

In addition to the sources noted in this biography, the author also accessed Gilbert's player file and player questionnaire from the National Baseball Hall of Fame, the Encyclopedia of Minor League Baseball, Retrosheet.org, Baseball-Reference.com, Rod Nelson of SABR's Scouts Committee, Bill Lee's The Baseball Necrology, and the SABR Minor Leagues Database, accessed online at Baseball-Reference.com.

2 Handwritten note in Gilbert's player file at the National Baseball Hall of Fame.