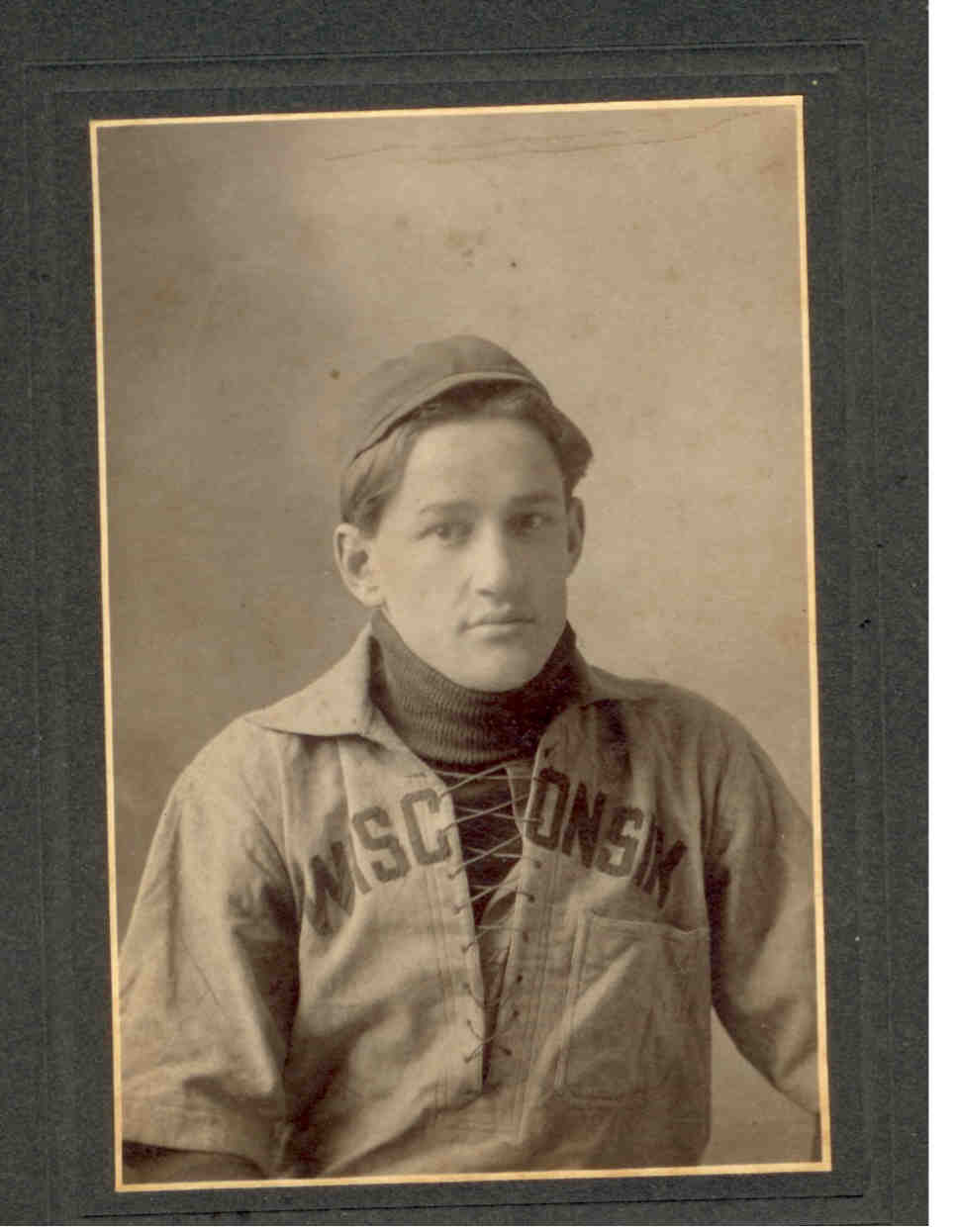 Bert Husting was pitching in the 1897 Wisconsin state amateur tournament in Fond du Lac when discovered by Connie Mack, the Milwaukee Brewers manager in the Class A Western League. The following year the 5’-10”, 185-pounder hurled the University of Wisconsin to the Western Conference title, and four years later, was a 14-game winner with the American League champion Philadelphia Athletics, piloted by Mr. Mack. In what appeared to be a promising career ahead, the 24-year-old right-hander abruptly retired from baseball to practice law. He left The Show after the 1902 campaign with a three-year, 23-21 won-lost record, and a 4.16 ERA in 69 games.

Berthold Juneau Husting, the youngest of eight children of Jean Pierre and Mary Magdalene Husting, was born in Mayville on March 6, 1878. Jean was a watchmaker from Luxembourg, and Mary was one of 17 children of Solomon Juneau, a founder and first mayor of the City of Milwaukee. Solomon’s wife, Josette, was the granddaughter of a chief of the Menominee tribe of Indians. Throughout life, Bert was proud of his native-American heritage, as well as his middle name, Juneau. Not fond of his first name, he acquired the nickname, “Pete,” in childhood and preferred it over Berthold, or Bert.

Pete participated in sports at Mayville High School, and pitched for the school nine in 1895-96. He also played third base for the Mayville city team in the summer of ’96. After high school, he attended the University of Wisconsin and starred in football and baseball. On the gridiron he was a backfield teammate of Pat O’Dea, the legendary Australian-born dropkicker, and on the diamond, a standout hurler for the Badgers.

In 1899 Husting signed a professional contract with Connie Mack’s Milwaukee club of the Western League, and logged a 9-8 won-lost mark. He returned to school in the fall, earned a law degree the following June, and immediately rejoined the Brewers for a second season. The Western had become the American League, in line with the quest of the circuit’s president, Ban Johnson, to attain status as a major league. The movement gathered momentum when the National League reduced its number of teams from 12 to eight after 1898, and continued when Johnson lined up several millionaires to bankroll the venture.

Pete was on his game with the Brewers in 1900; he won four of five starts, all complete games, and asked for a pay raise. Sporting Life reported in its July 14 issue that “Pitcher Husting has deserted the Milwaukee club because an increase in salary was refused him. He has been fined and suspended for the balance of the season.” In early August, Mack traded Husting to Pittsburgh in exchange for left-hander Rube Waddell.

Pittsburgh was blessed with a fine mound staff, and could afford to move Waddell, despite his league-leading ERA of 2.37. Manager Fred Clarke still had four quality starters; Jesse Tannehill and Deacon Phillippe notched 20 wins apiece, and Sam Leever and Jack Chesbro were 15-game victors that season. The Pirates finished second to Brooklyn in the standings, with minimal contribution from Husting; his baptism of fire in the Show consisted of just two non-decision relief appearances.

In 1901 the American League achieved major-league status, and Connie Mack was named manager of the Philadelphia Athletics. The National League’s salary cap was set at $2,400, and Mr. Mack was able to snag several players from the Phillies by offering more. Second baseman Napoleon Lajoie signed for $4,000, and won the AL’s first Triple Crown.

With the departure of the Tall Tactician, Milwaukee selected Hugh Duffy, the all-time batting average leader (.440 in 1894), to pilot its first major-league team in 1901. One of the rookie skipper’s hurlers was Husting, who chose to sign with Milwaukee following his big-league debut the previous summer. The Brewers season was frustrating for all concerned; the club finished in the cellar with a 48-89 record, and Pete won nine of 24 decisions. The season opener on April 25 at Detroit was typical of the bizarre year; the Brewers had a 13-4 lead over the Tigers going into the bottom of the ninth, but the home team erupted for 10 runs to win, 14-13. Frank “Pop” Dillon’s two-run double off reliever Husting was the deciding blow.

The Milwaukee franchise moved to St. Louis in 1902. Pete considered several contract offers, including one from St. Louis, but chose the Boston Americans. With teammate Cy Young looking on, Husting started the April 25 game at Washington, a disastrous 15-4 loss; touched for 15 runs (eight earned), 15 hits, and eight walks in eight innings, he was sold four days later to the Athletics.

When the Phillies filed a lawsuit over the loss of its players, Connie Mack lost some key players from his fourth-place team of ’01, including Lajoie, who moved on to Cleveland. He rebuilt the Athletics with catcher Ossie Schreckengost and infielder Frank Bonner from Cleveland, second baseman Danny Murphy from the Connecticut State League, Rube Waddell from the California League, and Husting. The new acquisitions complemented the holdovers: first baseman Harry Davis, third sacker Lave Cross, outfielders Dave Fultz and Socks Seybold, and young southpaw Eddie Plank.

Husting occupied the third slot in the starting rotation behind Plank and Waddell; the trio accounted for 58 of the team’s 83 victories. Waddell was 24-7; Plank, 20-15; and Husting, 14-5. Seybold led the AL in home runs with 16, the league record until Babe Ruth belted 29 in 1919. Lave Cross topped the A’s with 108 RBIs, Seybold totaled 97, and Davis, Murphy, Lave Cross, Seybold, Fultz, and Schreckengost all batted over .300. Philadelphia outdistanced the St. Louis Browns by five games to win the pennant, but a true championship season was unfulfilled when NL champion Pittsburgh refused to engage the Athletics in a playoff series. Pirates owner Barney Dreyfuss was incensed over the dealings of Ban Johnson and his AL cohorts, so a World Series wouldn’t be played until 1903.

Husting’s 1902 year was enhanced by his marriage to Miss Agnes Sternberger in Mayville on August 27. Bonduel Husting, Pete’s attorney-brother, was best man; the two would become law partners later that year in Fond du Lac. Immediately after the nuptials, the newlyweds left for Chicago; the following day Agnes watched as her husband lost a 4-1 decision to the White Sox. The couple spent their honeymoon traveling with the A’s on the road swing, and the experience more than likely factored into Mrs. Husting preferring to be cast in the role of attorney’s wife rather than as spouse of a ballplayer. Mr. Mack attempted to re-sign Pete in the postseason, but the hurler-turned-lawyer remained firm in his commitment to walk away from the game.

The law practice of Husting & Husting grew in Fond du Lac, as did the family of Pete and Agnes. Suzanne, John, and Constance joined the Husting household; Constance was called “Connie,” obviously in deference to Mr. Mack.  Pete hadn’t put away his spikes for good; Sporting Life reported in its September 26, 1903 issue that he pitched occasionally for the Fond du Lac town team.

Duck hunting was the major activity for all of the Husting brothers. In April, 1905, Pete and Bonduel were hunting in separate boats on Horicon Marsh near Fond du Lac, when Pete’s boat sank. He shouted for help, and Bonduel responded, but was delayed when a violent rainstorm filled his boat with water and it sank. The brothers managed to make it safely ashore after a six-hour battle with the elements.

Years later, a hunting accident took the life of the oldest Husting brother, Paul. A lawyer by profession, he served as Mayville district attorney for two years before winning a Wisconsin state senate seat in 1906. A Democrat and supporter of President Woodrow Wilson, he ran for the U.S. Senate in 1914, and won election by a narrow margin. He was home in October, 1917 to go duck hunting on Rush Lake with another brother, Gustave. Sitting forward in the boat, Paul pointed to a flock of ducks, and stood up just as Gustave fired his gun. The senator was shot in the back, and died two hours later.

In July, 1906, Pete lost the sight in his right eye as the result of an earlier accident; he had run into a wire clothesline in his yard. Surgery was performed when the eye became infected; the procedure was necessary to save the other eye. Later, a glass eye replaced the damaged right organ.

Husting returned to baseball in 1905 on a part-time basis, serving as president of the amateur Fox River Valley League. When the Class D Wisconsin Association was formed two years later, Pete became president of the Fond du Lac team. In 1908 the circuit was re-named the Wisconsin-Illinois League, and the following season, Husting campaigned for the circuit’s presidency. Denied the post, his career as a baseball executive was over.

Pete moved the family and law practice to Mayville in 1915, and as time permitted, continued to enjoy duck hunting. In addition, he took annual trips to Chicago for visits with Connie Mack when the Athletics came west to play the White Sox. He ventured into politics in 1930 as the Democratic nominee for lieutenant governor of Wisconsin, but lost to the Republican candidate, Henry Huber. Husting was a delegate to the Democratic national convention in 1932, and supported the election of Franklin D. Roosevelt. His efforts were rewarded the following year when the President appointed him U.S. Attorney for eastern Wisconsin, a position he held for 11 years.

When Pete suffered a heart attack in 1942, his work load was eased, as was duck hunting. After retirement he was closely monitored by the family, and in 1946 his heart condition curtailed all strenuous activity for the lifelong outdoorsman. In 1948 he was taken to Columbia Hospital in Milwaukee, where he died from a brain hemorrhage on September 3. Berthold Juneau Husting was 70 years old, and buried at Graceland Cemetery in Mayville. The Milwaukee Journal obituary told it like it was: “Husting was a small townish, anecdote telling, outdoor loving, unpretentious man.”

Wisconsin hasn’t forgotten Pete Husting; in June, 2009, two monuments were dedicated in honor of its native son. A memorial unveiled in Miller Park, home of the Brewers, pays tribute to the five Wisconsin-born players, including Husting, who played on Milwaukee’s first major-league team in 1901. The other monument is located on the grounds of the Limestone School Museum in Mayville, the school Pete attended as a youngster; its top line reads: “This monument is dedicated to the life of Berthold ‘Pete’ Husting.”