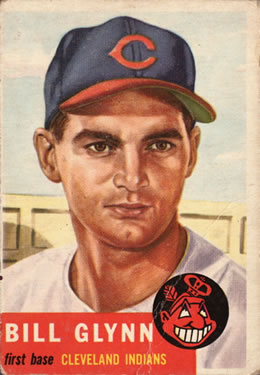 In 1946, after his discharge, Glynn was signed by the Philadelphia Phillies scout Chuck Ward and was assigned to Americus of the Class D Georgia-Florida League.  Glynn was regarded by Phillies scout Gil Smith to be the finest prospect in the league as he hit .328 with 104 RBIs and was named to the all-league team, and inspired an Americus sportswriter to pen this ode: “It’s Glynn again, the ball’s on the wing again.  Let us sing again the praises of Glynn.”[fn]Hulme Kinnebrew, “Phillies Beat Tigers 10-8, Cusick Hurt.” Article in Americus (Georgia) Times Recorder, date unknown, in Glynn’s file at the National Baseball Hall of Fame Archives. [/fn]

Less than a week after the season began, on April 18, Luke Easter broke his foot, and Glynn became the starting first baseman.  “He’ll give us some speed in the infield and he’s dangerous at the bat,” Greenberg said.  “He won’t hit the long ball as often as Luke, but he gives it a battle.”[fn]Hal Lebovitz. “Indians Get Early Chance to Test Improved Bench,” The Sporting News, April 29, 1953, 11.[/fn]  Greenberg’s assessment of Glynn’s power (or lack of it) was accurate. It wasn’t until May 31 that he hit his first home run, in an 8-1 victory in Detroit.

Easter returned in mid-June and Indians manager Al Lopez said that he had to put Luke back on first because one homer was worth more than three singles on the power starved Indians,  “especially with a club with as little speed as ours.” Lopez added, “When the ball is hit out of the park, the runners can creep around the bases and still score.”[fn]Hal Lebovitz, “Luke’s Homers Add Up to Plenty of Singles,” Cleveland News, August 15, 1953, 9.[/fn] Meanwhile Glynn worked on his hitting weaknesses.  Teammate Hank Majeski helped teach him the finer points of bunting and showed him how to employ a more open batting stance. Glynn was a good pupil, realizing that he night not be successful in every at-bat.

The Indians made a deal on June 1 that altered the season for Glynn, when they acquired first baseman Vic Wertz for pitcher Bob Chakales.  “I think Vic can do us a lot of good,” said Lopez.  He’s going to be good insurance.”[fn]Harry Jones, “Indians Trade Chakales for Wertz,” Cleveland Plain Dealer, June 2, 1954, 1D[/fn]Eventually, the offense Wertz injected into the lineup made it impossible to sit him down.  Glynn was relegated to backup duty.

Glynn regained the starting job[fn]“Glynn Returns to First Base Tonight,” Cleveland Plain Dealer, July 2, 1954.[/fn] against the White Sox on July 2, the start of a four-game series. “We’ll need all the defense we can get against the White Sox. They like to run and bunt,” Lopez said in explaining the move. However well it aided Cleveland’s defense, the switch to Glynn also gave the Indians an edge at the plate, as Glynn continued his domination of Chicago’s pitching (he hit .381 against them for the season).   In the four-game series, a sweep by the Indians, Glynn went 7-for-19. The Tigers followed the White Sox into Cleveland, and Glynn’s three-homer performance came in the first game of that series.