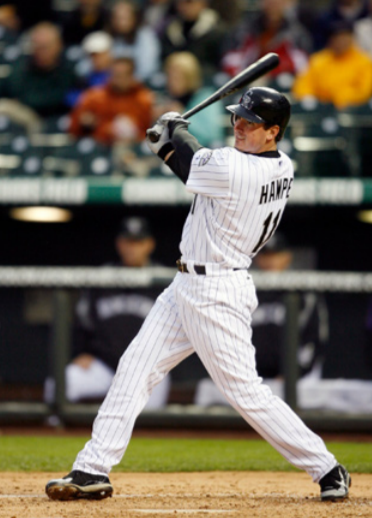 What do you, a young ballplayer, do when your college of choice doesn’t offer you a scholarship to play baseball? If you’re Brad Hawpe, you pick up the phone, dial the campus, and invite them to see you play. In Hawpe’s case, that led to a nine-year big-league career, mostly with the Colorado Rockies.

Bradley Bonte Hawpe was born on June 22, 1979, in Fort Worth, Texas, to Richard Hawpe, owner of an auto dealership, and his wife, Paula, an elementary-school teacher. Four years later a brother, Todd, came along.

Brad was a three-year baseball letterman at Boswell High School in Fort Worth. He began as a pitcher, but after he hurt his arm in his junior year, he switched to first base. A “wow” hitting moment occurred in a 1996 game against Springtown High School. With the bases loaded, Brad hit a Roy Hobbs-type shot that cleared the right-field fence, struck a light standard, and set off a “Natural” moment with electrical sparks and broken bulbs dropping onto the field. (He and his teammates collected the ball and pieces of glass, and he kept them as a souvenir.)1 In his senior year he pitched and played first base as his team won the Texas 4A state championship.2

Hawpe also starred for the Dallas Mustangs American Legion team, and began to attract the attention of scouts.3 Unfortunately from Hawpe’s viewpoint, they were interested in him as a pitcher, and he wanted to move up as a first baseman. In the June 1997 amateur draft he was selected in the 46th round by the Toronto Blue Jays as a pitcher, but he did not sign. He wanted to go to college and pursue his dream of becoming an outstanding hitter. Many colleges made scholarship offers, but not his desired Louisiana State University or University of Texas at Austin. While attending Navarro Junior College, south of Dallas, Hawpe continued to focus on his passion to play for LSU, so much so that he picked up the phone, called the LSU athletic staff and invited them to come see him play. LSU took him up on his offer, watched him in a game and immediately after the game offered Hawpe a full scholarship.4

In the 2000 season Hawpe led all NCAA Division I players with 36 doubles in 69 games.5 He topped that by hitting two three-run homers in a 10-4 victory over the University of Southern California in the College World Series.6 LSU won the national championship and Hawpe was named to the All-Tournament Team.7

In the 2000 free-agent draft, the Rockies selected Hawpe in the 11th round — as a pitcher.8 Since he had made up his mind to play as a first basemen or outfielder he almost decided to return to LSU for his senior year rather than turn pro. His signing scout, Damon Iannelli, explained to Hawpe that it was an internet mistake and that the Rockies wanted to sign him as a first baseman or outfielder, so he agreed to sign with the Rockies. 9

The Rockies sent Hawpe to the Portland Rockies of the short-season Class-A Northwest League. Splitting his playing time between first base and right field, he finished third in the league with a .900 OPS (on-base average plus slugging percentage).

The next season, Hawpe was advanced to the low Class-A Asheville Tourists (South Atlantic League). Again splitting time between first base and right field, he hit 22 homers and 22 doubles with an .870 OPS. Hawpe had a breakout season in 2002 with Salem of the high Class-A Carolina League. Leading the league in batting average (.347), slugging percentage (.587), and OPS (1.033), he was named the circuit’s Most Valuable Player. (He placed second in the league with a .447 on-base percentage, 87 runs scored, and 97 RBIs, and third with 38 doubles and 22 home runs.) Hawpe played all but two of his 122 games at first base. But a position switch had to be considered; Todd Helton, the Rockies’ first baseman with the Rockies, was well entrenched as a team leader and a major-league star.10

Hawpe knew he had to try to become a better outfielder especially since he had minimal experience at the position. He had to improve his positioning, reading baseballs hit his way, and improving his arm slot while throwing for improved accuracy. His learning began with his assignment in 2003 to Double-A Tulsa, where he played mostly right field. On July 14 he injured his right shoulder diving for a ball and missed the final six weeks of the season.

Nevertheless, the Rockies promoted Hawpe to the 40-man roster in 2004 and assigned him to the Triple-A Colorado Springs Sky Sox. Though he was still listed as an infielder,11 he played 86 of his 92 games with the Pacific Coast League club in the outfield. He batted a strong .322 with 31 home runs and 86 RBIs.

Hawpe’s early-season performance earned him a summons to the big leagues on May 1. With the Rockies playing a doubleheader at Coors Field, he pinch-hit for pitcher Tim Harikkala in the seventh inning of the first game and hit a ground-ball single to center field, his first major-league hit. Starting the second game batting seventh and playing right field, he went 3-for-4 with a two-run homer, a triple, and a line-drive single to center field.

Hawpe was sent back to Colorado Springs on May 30 and lit up the PCL with a hot .352 batting average for his second go-round. He hit 14 of his season’s 31 home runs in August, when he averaged one homer every 7.7 at-bats. His efforts earned another call-up to the Rockies for the final 20 games of the season.12 In 2005 spring training Hawpe knew that his prowess at the plate was a strength, but that he needed to improve as an outfielder. He found help from future Hall of Famer Goose Gossage, who attended spring training with the Rockies and provided Hawpe with instructions for making strong and accurate throws from the outfield. Rockies first-base coach Dave Collins helped with tips on positioning and throwing.13 Collins later commented that “when runners try and test him, they will pay the price,” and teammate Aaron Cook noted his reputation for throwing runners out, especially at home plate.14

Opening the 2005 season with the Rockies, Hawpe placed well among the NL’s rookies, and his hard work with Gossage and Collins as mentors began to show as well; he led the team with 10 outfield assists. But his season was cut short on July 9, when he injured his left hamstring trying to break up a double play. He was on the disabled list from July 10 until September 2.15

In 2006, Hawpe, healthy again, batted .293 with 22 home runs, 84 RBIs, and 16 outfield assists, the second highest in the majors that season. “One of my favorite parts of the game now is throwing somebody out at the plate,” he said.16

During the Rockies magical “Rocktober” run to the postseason in 2007, Hawpe contributed strongly. In the Rockies’ last 14 games, Hawpe had six doubles, a triple, and four home runs. Two of his homers were game-winners. His 116 RBIs and 29 home runs for the season were career highs. Working in the team’s front office at the time, Walt Weiss said, “Hawpe has the ability to carry a club, he is that dangerous at the plate.”17

In the wild-card tiebreaker on October 1, Hawpe was hitless in the Rockies’ 9-8 victory. In the third game of the National League Division Series, against the Philadelphia Phillies, Hawpe hit a key single in the Rockies’ winning rally, advancing Garrett Atkins from first base to third, after which he scored on a single by Jeff Baker. Hawpe also had several key at-bats in the Rockies’ sweep of the Arizona Diamondbacks in the Championship Series.

The Rockies took on the Boston Red Sox in Colorado’s first World Series appearance. The Rockies were swept, but Hawpe had a slugging percentage of .563, delivering a single in the second game, a triple in the third game, and a homer in the bottom of the seventh inning of the fourth game.

In 2008 Hawpe had a team-high 25 home runs, his third straight season with more than 20. He suffered a strained hamstring on May 21 and was on the disabled list until June 6. His injuries may have slowed him down after his return.18

Hawpe was slowed down by several injuries during first half of the 2009 season: a left hamstring injury on April 13, a neck contusion that kept him out from April 27 until May 1, and a groin strain from May 26-29. Still, he had his fourth consecutive year with more than 20 home runs (he hit 23) and he led the team with a career-high 42 doubles. He became a first-time National League All-Star in 2009. The 2009 Rockies won 92 games and took on the Phillies in the National League Division Series, but lost the series in four games.19 Hawpe was one of the team’s best offensive players during the season, but struggled at times against left-handed pitchers.20 Against the Phillies, he played in only two games and was hitless.

Hawpe’s 2010 season was hampered by a strained left quadriceps injury in April, which got him a stay on the disabled list.21 He suffered a rib injury on June 25 running into a low right-field wall in Anaheim while chasing a pop fly, and was listed as day-to-day for several games. Playing hurt probably affected his performance with a downward spiral in his batting and landed him on the bench as a reserve.22 On August 26, Brad Hawpe, 31 years old, cleared waivers and was released.23

Between his release and August of 2013, Hawpe played in five major-league organizations, the Tampa Bay Rays, San Diego Padres, Texas Rangers, Pittsburgh Pirates, and Los Angeles Angels of Anaheim. During his time with the Padres he went on the disabled list on June 21, 2011, and underwent Tommy John surgery five days later. With the Angels he played with the Salt Lake Bees and was called up to Los Angeles in June of 2013 but managed a batting average of just .185 after 17 games and was released on August 4, after which he retired as a player.

As of 2018 Hawpe, his wife, Kim, their daughter, Avery, and their son, Drake, lived in the Dallas-Fort Worth area. He spent some of his time coaching his daughter’s softball team and his son’s baseball team. He was a co-founder of The FUEL Nutrition, which prepares and markets health-food supplements. An avid outdoorsman, mainly hunting, he was the co-owner of Triple C ranch and deer farm with Matt Belisle and Todd Helton. He is one of the founders and a part-owner of the Cooperstown Cobras baseball program, serving the Dallas-Fort Worth area. Though he no longer had formal ties to any professional baseball team, he remained close to the game as a fan.