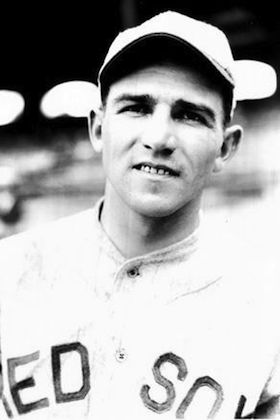 Not long after Doug Taitt was born (in Bay City, Michigan, on August 3, 1902), his father, George, moved the family to the Pacific Northwest. George Taitt was a lumberman, a logger, born in Ohio of two Canadian parents, and he moved the family to Vancouver, British Columbia. His wife, the former Maude Alice Bradford, bore five children – three boys and two girls. Doug was the second-born. The family then moved to Portland, Oregon, and that’s where Doug grew up.

Doug attended elementary school at the Glencoe School and then Franklin High School, but he never completed high school. Baseball called and he quit school (and his work as a retail clerk in a grocery store at the time of the 1920 census) to play ball. He played for a number of teams that were outside the scope of what was called Organized Baseball – semipro teams, and other teams in the West. It was only in 1925, when he was 22, that he first turned up in standard records.

Taitt was interested in baseball from an early age, and even served as mascot for the Portland Beavers. In 1921 he tried out as a pitcher for Portland and in the springtime was dubbed “a foxy hurler for a kid” with a change of pace his best pitch. He’d gotten tips on pitching from Portland’s Suds Sutherland.1 Taitt spent the first month with the Beavers, though not playing. In 1922 he pitched some for the Fulops in the Willamette Valley League, and then for Clarks in the Butte Mines League, where he also played the 1923 and 1924 seasons.2

In 1925 Taitt had been signed by the Los Angeles Angels. In April, at this point in his career an outfielder, he was turned over to the Raleigh Capitals of the Class-C Piedmont League.3 He did fairly well with Raleigh, batting .292 over the course of 45 games through the end of June, so the Angels brought him back west. He played in 63 games for the Angels, playing right field and batting .266. (The Pacific Coast League was a Double-A league, then the top minor-league classification.)

Taitt had another split season in 1926 – farmed out by the Angels to Class-C Pocatello of the Utah-Idaho League. He was a “slugging outfielder” for the Pocatello Bannocks, and on August 16 he was named manager of the team – the third manager the team had in 1926. He hit a league-leading 21 home runs, one more than Larman Cox of Ogden.4 The PCL season ran much longer so Taitt had started the season with the Angels and then later rejoined them, playing in 23 games overall, batting an even .300. Taitt batted left-handed, and threw right-handed. He was an even 6 feet tall and was listed at 176 pounds.

The 1927 season was spent with the Nashville Vols. “Taitt, when he connects, sends the apple on long journeys,” wrote the Atlanta Constitution. He hit .350 that year in Southern Association play. Of interest as well was a stint on the mound for Nashville against the Birmingham Barons on August 8. The Vols were losing big, when Taitt was moved in from center field and asked to pitch the last five innings; he gave up just three hits and one earned run.

After its season, Nashville sold “Poco” Taitt to the Red Sox on September 10.5 Red Sox scout Pat Monahan was almost certainly the man who’d first recommended him to the team.6 What first was reported as just a cash transaction was later revealed as involving quite a heavy price in players to be named later: the Washington Post reported that Boston sent players Clifford Knox and Bob Unglaub, and pitchers Del Lundgren and Ted Wingfield. In October Taitt kept fit barnstorming as part of the Bustin’ Babes as Babe Ruth’s team barnstormed against Gehrig’s Larrupin’ Lous.

The Red Sox also acquired Ken Williams from the St. Louis Browns in December, hoping the two acquisitions would add substantially more power to the team.

Taitt trained with the Red Sox in Bradenton, Florida. He made the team, as expected, and played his first game in the majors on Opening Day, April 10, in Washington, getting a seventh-inning high-bounding infield single. He was 1-for-4. Suffering from the flu for the first month of the season, Taitt struggled, but by the end of May he was hitting .294 and stayed remarkably close to that figure throughout the season, finishing at .299, having dipped below .300 on the final day of the season with a 1-for-5 day. Taitt hit only three homers but he drove in 61 runs, fourth-most on the team. (Bill Regan, with 75 RBIs, was the team leader.) Only Ken Williams and Buddy Myer hit for a higher average. The Red Sox finished in last place.

Taitt’s best day was the second game in a June 27 doubleheader against the visiting Washington Senators. He was 5-for-5 at Fenway Park, with three RBIs. There were other prime moments, such as when his 11th-inning single beat the Indians in a 3-2 walk-off on July 19.

He did pitch in one game. It was on July 25, 1928. The Red Sox were in seventh place, 28½ games out of first, and facing Cleveland. The Indians beat Boston, 10-2, in the first game of a doubleheader, and were winning again, 12-5, after seven innings in the second. Manager Bill Carrigan had already blown through five pitchers on the day, and likely knew that Taitt had pitched for Nashville (or Taitt had told him), so he brought him in from right field. Taitt got through the last inning, giving up two hits and walking two, while striking out one batter. Unfortunately for Taitt and the Red Sox, one of the hits was a bases-clearing double by Joe Sewell. His place in the record books was secure, albeit with a 27.00 ERA.

He had a solid .975 fielding percentage.

Taitt spent the winter in Boston. He did a lot of work in the gym, in particular with boxing, and was the “official sparring mate for Jimmy Byrne, of Louisville, light-heavyweight scrapper.”7 Though the relationship was not mentioned in the newspapers, Byrne was apparently a nephew, according to Taitt’s death certificate.

Taitt had his tonsils out at the very start of 1929 spring training, then broke his ankle. His first workout of the spring was on March 27. He pinch-hit three times (driving in the tying run in a game the Red Sox won on April 26), and didn’t start his first regular-season game until April 28. He was hitting .277 for the Red Sox when he was traded on May 23 to the White Sox for Whispering Bill Barrett, who had been grumbling out loud about how he wanted to get out of Chicago. Barrett was from Cambridge, Massachusetts, and Boston wanted a right-handed batter. The deal was done.

By the end of June, Taitt’s average had dropped 40 points, to .237. The decline continued, each month ending with a lower figure than the month before. He finished the season batting .206, because he’d only hit .169 with 12 RBIs in 47 games.

Dallas was home for Taitt at the start of 1930. He played in 98 games and hit .343 in Texas League action, and then played another 59 games (.329) for Little Rock and Atlanta of the Southern Association. He began the ’31 season with Atlanta, and hit .370 in 120 games. On August 17 he was in a Philadelphia Phillies uniform. They’d purchased his contract on the 12th. He got into 38 games, but still didn’t seem to have gotten his major-league stroke back, hitting only .225.

Taitt’s final year in the majors was 1932 with the Phillies, though all he had were four early-season pinch-hitting opportunities. He drove in a run with a base on balls in one of them, but made outs the other three times. On May 11 he was released outright to Indianapolis. There he hit an even .300 for 1932.

And then Taitt bounced around the minors – Hollywood, Nashville, Syracuse, Baltimore, Nashville again, Memphis, Williamsport, Shreveport, Tyler, Monroe … right through 1941. He managed the Monroe (Louisiana) Cotton States League team from 1939 through 1941 and finished in first place each of the three years, though 1940 was the only year the Monroe White Sox won the league playoffs and finals.

That was also the year he and his wife, Frances Hill, divorced; they had married in 1935. She was “a local radio singer” and, even though Taitt’s contract had been sold to the Minneapolis Millers after his 1935 season with Nashville, he pleaded “heart trouble” and declined to sign the Millers contract, even though it would have advanced him back up to Double-A and given him a boost in salary.8

Taitt wasn’t in baseball in 1942; he was in the United States Army Air Force. The Cotton States League had disbanded and he enlisted. He was stationed at Camp Lowry, near Denver, instructing in physical education, but was discharged for medical reasons.9

Apparently, Taitt did some logging in the offseasons but then, in 1944 at the age of 41, he was signed by the Portland Beavers. As the Seattle Daily Times wrote, “It took him 20 years to make the home team.”10 He debuted with a double, driving in two runs, on March 16 in San Jose. For the most part, however, Taitt was intended to work as the third-base coach for the Beavers. He was, however, released on May 1. He joined Sacramento but was released by that team on May 8.11

In 1946 Taitt managed the East Texas League’s Tyler Trojans. And pitched in one more game, on May 4 against Lufkin. On August 28, however, he was suspended indefinitely by club management, with no reason given. He’d hit .279 in the 39 games he assigned himself to play.

After 1947, Taitt stayed closer to home, managing Portland-area semipro teams. His day job was as a marine cargo checker on the Portland waterfront. He retired in December 1968. Taitt contracted ALS (Lou Gehrig’s disease) and died on December 12, 1970.

12  A lengthy portrait of Taitt as manager in 1947 appeared in the magazine Lake Martin Living, September 2012. The article, by Bob Whetstone, was entitled, “Poco and Me: A Millers Tale.”