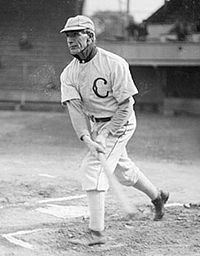 The 1906 World Series was never supposed to become a classic. The interleague championship series was still congealing into the form in which we know it today, so there were few prospects for surprise when the two Chicago teams squared off that October. At the outset it appeared to feature a David, played by the Chicago White Sox, a team so anemic at the plate that they are still remembered as the Hitless Wonders, against Goliath, a mighty Chicago Cubs team that won 116 regular-season games and ended the season more than 20 games ahead of the closest challenger. That third edition of the World Series, won by the South Siders in six games, turned largely on the unexpected offensive heroics of a 31-year-old reserve infielder named George Rohe. The utility infielder, after batting a mere .258 during the regular season1, hit two triples and a double, along with four singles, to lead the White Sox to the first great World Series upset, yet he spent only one more year in the major leagues after that season, and was out of baseball entirely by 1912. For that one brief week, though, his star burned as brightly as any in the baseball firmament.

George Anthony Rohe was born on September 15, 1874, to German immigrants Anton and Anna (Meyers) Rohe in Cincinnati. Anton had arrived in New York in 1853 and, migrating westward, established himself as a tailor in order to support Anna and their eight children. There is not a great deal of documentation available regarding George’s youth, but he was clearly talented on the baseball diamond, and in 1897 (a year after future Cincinnati Reds star pitcher Bob Ewing had played there) he joined the Wapakoneta Indians, a semipro team in western Ohio that played in the talent-laden, four-team Northwestern Ohio League. Rohe spent time there as both a catcher and third baseman, and was talented enough to earn a spot on the Mobile Blackbirds, of the Class B Southern Association, in 1898.

Despite hitting a decent .255, Rohe was Mobile released by Mobile on May 16 and spent most of the summer out of baseball before signing with the Grand Rapids Cabinet Makers (Class B Interstate League) for a week in September. He played the 1899 season with Danville in the very minor Class E Indiana-Illinois League, an organization that lived only one more year before collapsing. In 1900 Rohe took a chance of a different sort, and married Emma Kraemer in June, and they later had a daughter, Alice, in 1904. (Emma died in 1930 of pneumonia.)2

Newlywed and without a professional contract, Rohe evidently leveraged some of his Cincinnati connections into a spot as third baseman and manager of Fleischmann’s Mountain Athletic team in Fleischmann, New York, a team made up of “crack minor leaguers, most of them from the Cincinnati area.”3 Max and Julius Fleischmann, in 1900 the prospective owners of the Cincinnati Reds, owned and operated the resort area in New York, and routinely brought in outstanding baseball talent, often playing under pseudonyms, to stock the roster. Rohe’s performance with Fleischmann’s caught the eye of major-league executives, and led to a 14-game stint with the nascent American League’s Baltimore Orioles, debuting on May 7, 1901.

In Rohe’s obituary in The Sporting News in 1957, Fred Lieb wrote: “In 1901, the first year the American League spread eastward, Rohe spent the early season with the Baltimore Orioles and occasionally substituted at third base for the Orioles’ scrappy field leader, John J. McGraw. … Later in the season, McGraw sent him to (the minors) Minneapolis. …”4 Despite hitting reasonably well, Rohe was betrayed by his glove in a way his bat could not compensate for, and in June the Orioles released him.

Rohe signed with the St. Joseph Saints, a Missouri team in the Class A Western League, for 1902 and 1903, and batted .288 over the two years while also managing the squad to a 62-59 record. Despite a winning record, though, the Saints finished in fourth place that year, more than 20 games behind Hugh Duffy’s Milwaukee Creams. In 1904, at age 29, Rohe joined the New Orleans Pelicans in the Southern Association. On August 27, 1905, the Chicago White Sox purchased his contract from the Pelicans, and returned Rohe to the major leagues on Labor Day of that year. Though he hit only .212 that September, the team brought Rohe back for the 1906 season. He played games at both second base and third base, and in part helped manager Fielder Jones’s “Wonders” to a 93-58 record and the American League pennant. His best, however, was yet to come.

“George Rohe, the chap who did no small part to bring the championship to the Chicago White Sox, was in the series more through an accident than anything else, in two ways,” Sporting Life wrote. “The first was because (George) Tannehill was unable to play that bag, while the second dated before the opening of the season. … Rohe was secured from the New Orleans Club of the Southern League, and he was the captain of that club in 1905. Before the season began last spring Comiskey wished to send him back to New Orleans. … McGraw was sore at the New Orleans management … and he put in a claim for Rohe. … Comiskey declined to let Rohe go to New York, and hung onto him himself. That was how Rohe got into the big series and pounded out enough hits to make his position on the Chicago team solid for the next ten years.”5

George “Whitey” Rohe reached his baseball apex in the 1906 World Series. Coming to bat for the White Sox in the top of the fifth inning of Game One on a bitterly cold October 9, with the game scoreless and facing a pitcher no less intimidating than Mordecai “Three Finger” Brown, he slugged the first pitch into left field for a triple, and later scored on a fielder’s choice, leading to a 2-1 White Sox win. In Game Three he again tripled, this time with the bases loaded, off lefty Jack Pfeister, and drove in all three runs in a shutout victory over the Cubs. In Game Five he delivered three more hits, including a double off Ed Reulbach, and in the Game Six finale he singled twice and scored once in the 8-3 clincher. The White Sox won the World Series, in large part due to Rohe’s .571 slugging percentage and his storybook heroics.

A grateful Charlie Comiskey directed his manager to play Rohe as the regular third baseman in 1907. The 32-year-old appeared in 144 games, primarily at third but also in a few games at second base and shortstop, yet managed to eke out a meager .213 batting average. His final big-league game, however, came on October 6, 1907. Despite Comiskey’s post-championship assertion that Rohe would always have a job with the team, Whitey was cut before spring training in 1908. The press noticed. “George Rohe got the axe a couple days ago. … The white-haired German had an off-season in 1907, but many thought he would come back and make good as he did in 1906, when he was so great a factor in winning both the American League flag and the world’s honors. How fast an idol can fall! In October, 1906, a demi-god, in February, 1908, a discard!”6

Rohe was not ready to call it a career quite yet, though, and returned to the New Orleans Pelicans in 1908 as the starting shortstop. After 3½ years watching his batting average ebb (.242, .217, .225, and .218, respectively), he moved over to the Mobile Sea Gulls and the Montgomery Rebels, both still in the Southern Association, where he played until 1912. That year, despite hitting .280 with Montgomery and again with New Orleans, the 37-year-old conceded to the inevitable and hung up his spikes for good. His lifetime major-league batting average was .227, and his minor-league tally just a bit better at .258, but Rohe’s legacy was built in October 1906.

Once out of baseball, Rohe tried working in a steel mill in Pennsylvania, but an undisclosed illness forced him to discontinue performing heavy work of any type. Out of necessity he turned to photography, and landed a position with the Dow Drug company as a professional staff photographer, a job he held until the mid-1940s.

George Rohe died in Cincinnati General Hospital June 10, 1957, at the age of 81. He had suffered a stroke earlier in the year, and the second one proved fatal. When he died, Rohe was “one of the few living survivors of the Chicago American ‘Hitless Wonders’ World’s Champions of 51 years ago, which achieved baseball’s top honors largely on the unexpected stick work of the obscure substitute yanked from the bench to fill an emergency.”7 He is buried in the Walnut Hills Cemetery in Cincinnati.

1 All statistics collected online from http://baseball-reference.com/players/r/rohege01.shtml.