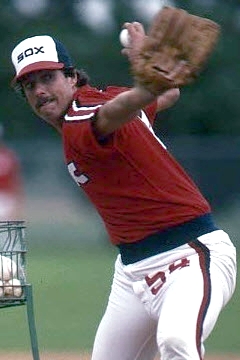 Becoming a major-league baseball player if you were born in Rhode Island is a difficult task for a number of reasons, among them the lack of outdoor playing time as a result of the fickle New England climate. Despite the odds, Jim Siwy, a native Rhode Islander, who pitched for the only high school in the smallest city, Central Falls, in the smallest state, Rhode Island, eventually became a member of the Chicago White Sox for parts of the 1982 and 1984 seasons. Before and after his short stay in the majors, Siwy had a minor-league career that spanned Class A through Triple-A and which also allowed him to travel internationally to play baseball.

James Gerard Siwy was born in Pawtucket, Rhode Island, on September 20, 1958. At 6-feet-4 and 200 pounds, Siwy threw and batted right-handed. After graduating from Central Falls High in 1976 and playing American Legion baseball, he enrolled at Rhode Island College, in Providence, and played baseball there for a fellow Rhode Islander and former big-league pitcher, Dave Stenhouse. While at RIC, Siwy was an integral part of the 1979 team that went to the NCAA Division III baseball championships in Marietta, Ohio. In the regional tournament, held in Willimantic, Connecticut, RIC, a dark-horse team entering the tournament, beat favored Eastern Connecticut State College twice to go to the national championships. Siwy closed out the 3-1 first-game victory and earned the 7-5 second-game victory. However, RIC could not repeat its regional success in the nationals, bowing out in two games. Siwy, the starter in the first game, suffered the 12-4 loss to Cal State-Stanislaus, giving up eight runs and eight hits in 5? innings. After the collegiate season, he pitched for Harwich in Cape Cod League, which went to the league finals before being defeated for the championship by Hyannis.

In the third round of the free-agent draft in 1980, Siwy was selected by the Chicago White Sox, but decided to decline the offer and went to work for the Central Falls police department. Asked about why he opted for police work instead of the major leagues, Siwy said, “They were going to send me to the rookie league, which only has a two-month season. … I had six or seven months in on the police department back home and was still on probation. I wasn’t going to leave a secure job like that for two months of baseball. … I loved it. I did every aspect of police work. Yes, I had to take my gun out a lot of times – but I never had to shoot it at anyone.”1

Siwy became a full-time policeman, until the beginning of the 1981 season, when the baseball bug bit at him again. In Siwy’s words: “I knew I’d be kicking myself in the tail for the rest of my life if I did not give it a shot. So I told them I’d play this year, even if it meant the rookie league.”2

The White Sox sent Siwy to the Appleton (Wisconsin) Foxes of the Class A Midwest League, where he posted a 1.96 ERA as a starter with a 5-0 won-lost record in 55 innings. He was named to the Midwest League all-star roster. That stellar mark earned Siwy a promotion to the Glens Falls (New York) White Sox of the Double-A Eastern League for the remainder of the season, where he continued his fine pitching and had an 11-4 record, mainly as a starter.

Siwy went to spring training with the White Sox in 1982, and was assigned to the Edmonton Trappers of the Triple-A Pacific Coast League, before the season began. In 26 games for Edmonton (25 starts), he compiled a 12-8 record with a 4.06 ERA, 58 walks, and 79 strikeouts. At one point he reeled off eight straight victories. As a result, Siwy was called up to the White Sox in August and made his major-league debut, in relief, in a 13-5 loss to the Kansas City Royals on August 20. His first appearance was not impressive; he was rocked for five runs and four hits in two innings with three walks. Three days later, on the 23rd, Siwy started against the Cleveland Indians. He showed improvement, allowing six hits and three runs in five innings, with no decision. Although Siwy felt that he had been “squeezed” by home-plate umpire Ted Hendry on a few ball-and-strike calls, his effort prompted manager Tony LaRussa to say after the game, “I thought he did all right. … He has the makings of a big-league pitcher.”3 After his start, Siwy was optioned to Edmonton, where he completed the 1982 season.

The next season the White Sox changed their Triple-A affiliation from Edmonton to Denver of the American Association. The team also decided on a different role for Siwy: relief pitcher. He came into 16 games out of the bullpen and made only five starts. He had a 3-3 record with a 6.14 ERA and five saves, giving up 60 hits and 25 walks in 51 innings. Frustrated by an appearance against Indianapolis in which he gave up four runs, three hits, and three walks in the ninth inning of an 8-7 loss, Siwy swung at a chair and broke two knuckles on his pitching hand. The injury ended his season.

In 1984 Siwy went to spring training with the White Sox again but was sent back to Denver, where his role reverted to that of a starter. He pitched in 15 games for the Bears, starting 14, with a 4-5 record and a 5.25 ERA. The White Sox called him up in May; he appeared in one game and was immediately sent back to Denver after he pitched well in a four-inning relief stint against the Texas Rangers. On June 26 Siwy was traded to the Cleveland Indians in a deal for pitcher Dan Spillner. The Indians sent him to their Triple-A team in the International League, the Maine Guides. Although bothered by a sore shoulder, Siwy was 1-0 in 17? innings with the Guides, with two saves and an ERA of 2.04.4

At the end of the season Siwy was placed on the Indians’ 40-man roster, signing a one-year contract in February 1985. During the offseason he played in the Caribbean Baseball Series, which pitted teams from Mexico, Venezuela, the Dominican Republic, and Puerto Rico in a double-elimination, round-robin tournament. Caribbean baseball was a new type of experience for Siwy. He commented, “In the Dominican Republic, they lug in car horns and big car batteries and blast them at you during games – two or three of those and it gets loud. … I think the fans are more into it than in the States. You do bad, they’ll throw stuff at you. In the States, it’s more of a social gathering, you go with the boys, you get drunk, you watch the game.”5

Why did he go to pitch in the tournament for the Tiburones (Sharks) of Venezuela? Siwy said the Indians suggested it: “I said I wanted a place to work on my pitches – find me a place. So they said, go to Venezuela. It’s better than spending a cold winter in Rhode Island. It’s 5 degrees there. Why do I want to be there.”6

In spring training of 1985, Siwy pitched well, but lost in a bullpen battle for two big-league spots and was sent back to Maine. He got off to a rocky start with the Guides, but he still was considered for a call-up to the Indians. However, he was out of major-league options and would have to be placed on irrevocable waivers to be promoted to the big-league club. On April 22 Siwy was released by the Indians, but he was quickly picked up by the White Sox, who assigned him to the Buffalo Bisons of the American Association. In an interview after he re-signed with the White Sox, Siwy was philosophical: “I was confident about getting a call. Actually, it was a relaxing week in some ways. Granted, I was released, but (the Indians) still had to pay my contract, so I wasn’t panicking for money. I didn’t know if it would take a week, or two weeks or what, but I knew someone would call me up.”7

Siwy was bitter about his experiences with the Cleveland organization. He said he had not been given an adequate chance to pitch well. While admitting that his own attitude was not great, Siwy expressed disappointment with the Cleveland manager, Pat Corrales, concerning spring training. “All I heard was that I didn’t get enough groundball outs,” said Siwy, a sinkerball pitcher with a heavy fastball. “My sinker wasn’t sinking great. I was getting some fly-ball outs. The only thing Pat Corrales said to me was, ‘I learned a lot about you the last two weeks.’ … I’m just glad to be away from the Cleveland organization. I feel good. I know I’ll get strong again. And when I do, I’ll be torturing people again. I just have to get my attitude back, and it’s getting there.”8

But Siwy’s stay with the White Sox ended up being a short one (16 games, 3-5, 4.93ERA), and he ended the season in Birmingham of the Double-A Southern League in the Detroit Tigers system. He spent 1986 and 1987 in the San Diego Padres’ farm system, with the Las Vegas Stars of the Pacific Coast League. The first season he was 6-4, primarily as a starter, and the second season he was 6-8, mostly as a reliever. After 1987 he left professional baseball.

4 Baseball-Reference.com does not reflect any saves, but an unidentified newspaper clipping the author encountered reads: “Jim Siwy of Central Falls, a former pitcher at Rhode Island College, has been placed on the Cleveland Indians’ 40-man roster. Siwy, 26, was acquired by the Indians from the White Sox on June 21 in the trade that sent Dan Spillner to Chicago. Siwy, who was bothered by a sore shoulder during the year, was 1-0 with two saves in 17? innings with Maine (International League).”