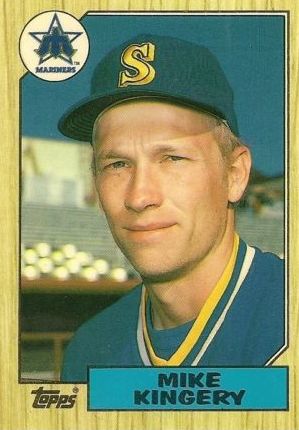 Kingery attended Atwater Public School as did his four brothers, Doug, Bob, Tom and Jim.[1] Each was a standout athlete in his own right. By accounts of many close to the Kingery family, “Doug was the best athlete in the family.”[2]   Kingery played VFW and American Legion baseball in high school. He attended St. Cloud State University, was drafted by the Royals, and spent six seasons in the minor leagues before being called up by the Royals.

Kingery credits his brother Doug with being the force that found and developed the talents that led to his success in the major leagues. “Although Mike was 11 years Doug’s junior, he got to play on his older brother’s softball team.”[3]   Kingery credits Doug for the work ethic he developed. “I was 18 then and I did whatever Doug told me to do. He’d tell me to hit a ground ball to the shortstop and beat it out. So I would hit a ground ball to the shortstop and try to beat it out.”[4] Kingery, a born-again Christian, credits Jesus Christ for giving him the innate talent to be a professional athlete as well as the temperament to survive in the major leagues and remain grounded in addition to a retirement that saw the growth of his family, the development of “Solid Foundation Baseball School, Inc.,” a baseball training school that Kingery owns and operates, and the ability to deal with the 2006 death of his brother Doug.

Kingery admits his batting technique was never strong.[14]  Statistics show his season batting averages fluctuated over his over his 10-year career, from a high of .349 with the Colorado Rockies in 1994 to a low of .107 with the Oakland Athletics in 1992.