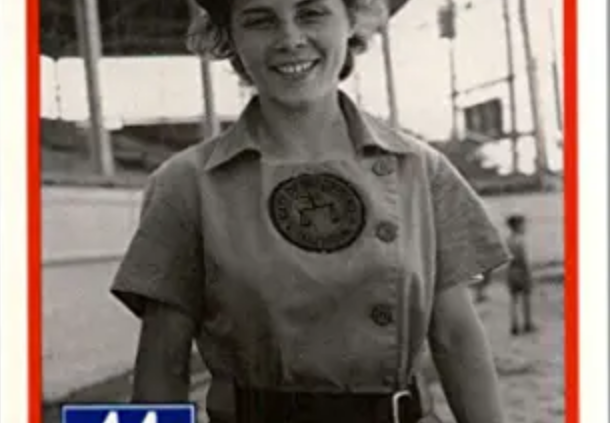 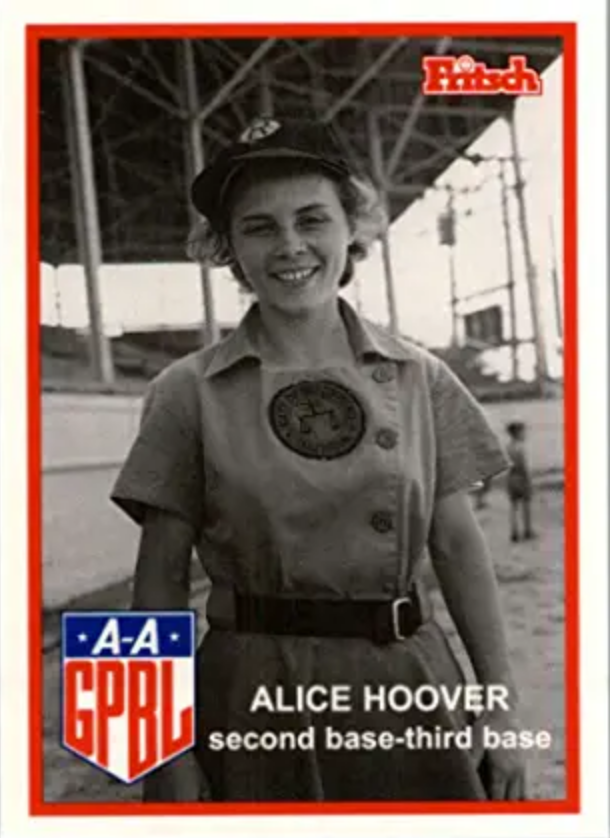 Alice Hoover played one season in the All-American Girls Professional Baseball League with the 1948 Fort Wayne Daisies. The 4’11”, 105 pound infielder from Reading, Pennsylvania was, not surprisingly, nicknamed “Pee Wee” by her Fort Wayne teammates. Born in Reading on October 27, 1928, to Ethel (Shurman) Hoover and Charles Hoover, Alice was the oldest of four daughters and was preceded in birth by three of her six brothers. It was her brothers who developed Hoover’s baseball and other athletic talents early in life, as she recalled: “I was on the playground every day. I’d play right along with (my brothers) when they played baseball. They used to play football, and I played that with them too.” Hoover added with a laugh, “If they had a fight — I was in it too. I was toughening ’em out.”

Before she was known as “Pee Wee,” Hoover acquired another nickname on the Reading playground. According to Hoover, “I don’t know why, but whenever I played ball with (my brothers) my nose ran all the time — so they called me ‘Sniffles.’” That’s what she later put on the license plate of her car.

At the age of 12, Hoover started playing organized softball with a local playground team. Her speed and fielding prowess resulted in an invitation from Babe Jacobs Miller, a neighbor, to occasionally play as a substitute for the “Kaufmann Maids,” a Reading-based women’s amateur team. The “Maids” (as they were referred to in the local papers — they would later be called the “Piker Maids” when they changed sponsor) were hugely successful, winning the Pennsylvania Women’s State Softball Championship eight times between 1933 and 1941. Miller was the first baseman on the team and one of its best players.

A 1941 Reading Times article analyzing the Piker Maids’ prospects in an upcoming tournament described Hoover as “. . .the 13 year old second sacker. . .who is the youngest girl softball player in Pennsylvania playing major ball.”  Hoover’s role as a part-time substitute with the Maids provided her not only with an outlet for her talents against higher competition but also advice from Miller, along with other teammates, that helped her development as a ballplayer. (The 1941 article was not Hoover’s debut in the local press. The year before, she and her brother Richard were pictured in the Times when she was the sole female finalist in the annual Reading city marbles tournament — after she defeated him to get to the finals.)

Another young Reading player developing in a similar part-time role with the Maids was Ruth Kramer Hartman, who would play in the AAGPBL in 1946 and 1947 with the Racine Belles and Fort Wayne Daisies. According to Hartman, “Alice was fast. As fast as anyone around (the Reading area). And she could bunt. With her speed and bunting ability, she was always on base.”

At age 14, Hoover left school after ninth grade to take a full-time job as a production line worker in a shirt factory. Due to problems with alcoholism, her father had problems holding onto jobs, and, according to her younger sister Barbara, Hoover’s job in the shirt factory provided the primary source of income for the family, supplemented by the contributions of older brothers who had moved out.  Regrets that Hoover may have experienced in leaving school early were tempered by an incident with a male teacher that occurred during her final year. She was still emotional in relating the story years later: “He said I didn’t do my homework, and I said, ‘No, I had a baseball game.’ And do you know what he did? He pulled my hair. He would be in jail today. He pulled my hair, and I got out of the chair, and I decked him. He never bothered me after that. What the heck? That hurt. He could have made an excuse for one day.”

Even while working full-time, Hoover continued to excel in her play with various Reading softball teams. In the spring of 1948, while playing for the Seventeenth Ward A.A. (the “Maids” under yet another sponsor), she was encouraged by Myrtle Hopson, the team’s manager, who was also a physical education teacher in the Reading School District, to attend a local AAGPBL tryout that was to be conducted by league scout Shirley Jameson. Jameson, one of the first four players signed by the league, played four seasons for the Kenosha Comets. She was sufficiently impressed with Hoover to see that she was invited to AAGPBL tryouts in Opalocka, Florida.

Over her parents’ opposition, but with the further encouragement of Hopson, the 20-year-old Hoover made the decision to leave her job in the shirt factory on a temporary basis and join the tryout. This was a major event — not only was this her first time away from her home in Reading, but the trip from Harrisburg, Pennsylvania, to Washington, D.C., then to Florida, was her first time on a train.

Successful in the Florida tryouts, Hoover was assigned to the Daisies. She remembered most the excitement she felt on the bus ride north as the team made its way to Fort Wayne from spring training. They played daily exhibitions in towns they passed through in Texas, Oklahoma, and other stops on the way. Hoover remembered how frequently the team had to sleep on the bus. According to her, the novelty of sleeping on the bus wore off relatively quickly and became more of a discomfort than an adventure.

Hoover appeared in only six games with four at bats for the Daisies, most of which (according to her) were as a pinch hitter because of her small strike zone. She recalled playing a few games at second and third base, adding that she believed the league records should have indicated appearances in a few more games than six. The Daises finished fourth in the five-team Eastern Division that year with a 53-72 record.

Hoover enjoyed playing for Daisies manager Dick Bass, but would have liked more playing time, particularly in view of the success she had enjoyed up to that time on the softball fields in Reading. However, she viewed her limited playing time with the perspective that “I was a ‘rookie,’ and rookies just didn’t get to play much.”

The limited playing time aside, Hoover had happy memories of the season. “I’m glad I got to play in the league; I met so many people.” The family she lived with in Fort Wayne treated her well, and she became friendly with a number of her teammates, particularly June Peppas and Georgiana Rios, a native of Cuba. Rios, like Hoover, would only play a single season in the AAGPBL, but Peppas played in the league until 1954, and was named an All-Star at first base in 1953.

Hoover’s most painful memories of her time in the AAGPBL involved the league official uniform with its short skirts, which she described as having “… little pants underneath and nothing to protect your legs.”  Hoover had vivid memories of the uniforms: “My God, you beat up your leg if you slid! Good grief — half the legs are sticking out! When we played [softball in Reading] we had regular uniforms with pants all the way down to your ankles so they protected your leg if you slid, but with the skirts [you] ended up with a strawberry.”

Hoover talked about how she was frequently asked about the initial charm school training in the AAGPBL, which was publicized in “A League of Their Own.” She observed that for the most part, the charm school portion of the program was eliminated by the time she played with the Daisies. “We weren’t required to attend,” she explained, adding with a laugh, “I tell anyone who asks that we were already ladies when we got there.”

Despite making $75 a week to play with the Daisies (a good portion of which was sent back home to her family), Hoover’s feelings of responsibility for her family outweighed her desire to continue playing in the AAGPBL. After the conclusion of the 1948 season, she returned to Reading, as her job in the shirt factory was still available to her. In reflecting on the decision 60 years after the fact, Hoover still wished she had played longer with the Daisies, but tempered that with her concern for the support and well being of her family, as well as the availability of her job, relating: “I was afraid if I went out there again, I wouldn’t have my job [making shirts] when I got back. In those days around Reading, jobs weren’t so plentiful.”

After returning home, Hoover played a few more seasons in local softball leagues, but according to her, she stopped about the time she turned 30. She cited problems she encountered with continued participation in amateur leagues because of the time she spent playing professionally. As she put it, “Once you’ve played pro, you’re always a pro and they don’t want you playing amateur. I could play, but I would not have been able to play in a championship game.” She explained that since she was not eligible for postseason or championship play, teams were reluctant to give her a roster spot they could allot to someone else eligible for both.

Hoover eventually changed from working on shirt factory production lines to working in production of computer components with Western Electric (which would eventually become Agere) in Reading. She retired after 30 years (she never married or had children).

Until encountering problems with her health in 2010, Hoover actively participated in a number of AAGPBL-related events. She was among those present in November 1988, when the Baseball Hall of Fame opened the first “Women in Baseball” exhibit. She also attended several other AAGPBL events in Cooperstown and reunions of the league’s Players’ Association. Hoover also appeared regularly at related events in the Reading and Southeast Pennsylvania region.

Whether she would be addressed as “Pee Wee” or “Sniffles,” anyone meeting Hoover before she encountered health problems was overwhelmed with the energy she exuded. According to her peers in Reading softball leagues, this energy also was her trademark on the field. It is unfortunate that Hoover’s brief time in the AAGPBL did not provide her with an opportunity to fully display her abilities, and that the circumstances she faced at home did not provide her with an opportunity to extend her time as a professional.