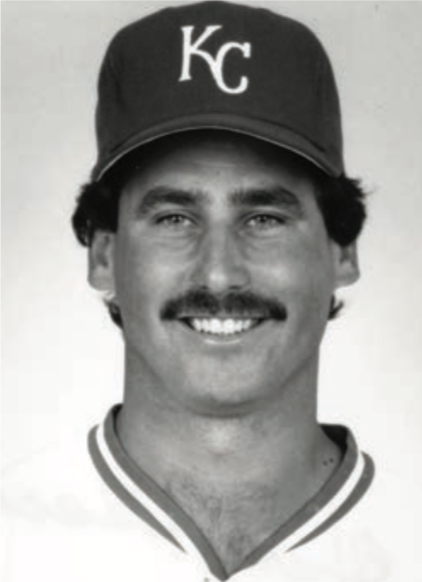 Bud Black spent 15 years as a major-league pitcher and followed that up with a long career as a manager. In 2018 he was in his 11th year as a big-league skipper.

Harry “Bud” Ralston Black was born on June 30, 1957, in San Mateo, California. He graduated from Mark Morris High School in Longview, Washington. His father, Harry Sr., was a center for the Los Angeles Monarchs of the Pacific Coast Hockey League (1945-48) and led the team in scoring in 1946.

Black pitched for Lower Columbia College (Washington) in 1976 and 1977. He was drafted twice in 1977, when the major leagues conducted two drafts a year. First, he was drafted in January by the San Francisco Giants in the third round. Then, in the June draft, the New York Mets selected him in the second round. Black declined to sign each time, deciding instead to attend San Diego State University from 1978-1979, majoring in finance. Black led the Aztecs in innings pitched and strikeouts in 1978 and 1979. Seattle drafted the left-hander in the 17th round in 1979 and Black signed with the Mariners.

Black spent the rest of 1979 in Class A, making 19 appearances with San Jose (California League) and Bellingham (Northwest League). He returned to San Jose in 1980, appearing mostly out of the bullpen. His 5-3 record and 3.45 ERA earned him a promotion to Double A to start 1981. His 2-6 record with Lynn (Eastern League) did not tell the entire story. Black led the team with a 3.74 strikeout-to-walk ratio and was third on the team in strikeouts despite making only 11 starts. He made four appearances for Triple-A Spokane before getting a September call-up with the Mariners for two games. He made his major-league debut on September 5, 1981, coming out of the bullpen against the Boston Red Sox. In the bottom of the fifth, in the midst of a six-run Red Sox rally, manager Rene Lachemann used him as a situational lefty to face one batter, Rick Miller. Black threw a wild pitch, then surrendered a single, and was replaced. He appeared in just one other game, the next day. He came on with two outs in the bottom of the sixth, and walked the batter he faced, but then picked him off first. He worked the seventh, giving up a leadoff double and walking two while getting two outs and then handing the ball over to Shane Rawley, who closed out the inning.

Seattle traded the young left-hander to Kansas City in March 1982 to complete an October 1981 deal that sent infielder Manny Castillo to the Mariners.

Black started 1983 with Triple-A Omaha but was recalled in May to assume a spot in the starting rotation, taking over for Vida Blue, who was sent to the pen.2 He pitched his first career complete game as a Royal after 27 starts. The game was a 6-2 win over the Milwaukee Brewers on August 4, 1983. Black posted a solid 10-7 season for the second-place Royals. Perhaps the most memorable game of the season for Black was the “pine tar” game on July 24. George Brett hit a two-run home run in the top of the ninth to give the Royals a one-run lead. Yankees manager Billy Martin claimed that the pine tar on Brett’s bat was more than the league-allowed 18 inches. The umpires agreed, calling Brett out and giving the Yankees the victory. The Royals protested the call. American League President Lee MacPhail reversed the decision of the umpires, and the game was resumed on August 18. Both the Royals and Black benefited from this reversal. Had the called stood, Black would have been the losing pitcher. Instead, Black had a no-decision.3

Black made his postseason debut on October 2 in the American League Championship Series against the favored Detroit Tigers. Black had made three starts against the Tigers during the regular season, suffering one loss and two no-decisions. His ERA approached 6.00 and the Tigers hit .319 against him. This scene repeated in Game One of the ALCS. Black lasted only five innings, giving up four earned runs, as the Tigers beat the Royals 8-1.

The 1985 season was a different story. Black had a season almost statistically opposite from 1984. He led the team in losses (15), starter ERA (4.33), runs allowed (111), and earned runs (99). The Royals made the ALCS again, this time against the Toronto Blue Jays. Black started Game Two and pitched seven strong innings. Usually reliable closer Dan Quisenberry could not hold onto the lead, and the Royals fell behind in the series two games to none. Black made two more appearances in the ALCS, both relief appearances. His 3⅓-inning relief appearance in Game Six helped the Royals force a Game Seven, and they won the American League pennant. Black made two appearances in the World Series against the St. Louis Cardinals, including a five-inning loss in Game Four. The Royals won the Series in seven games, giving Black his only World Series ring. Black did not make the postseason again in his career.

The 1986 season marked a transition to the bullpen for Black. He made four starts at the beginning of the season but was moved to the bullpen in early May. Black seemed to thrive in his role. Opponents hit .198, while he carried a 2.34 ERA. The Royals finished second though, preventing a potential repeat in the postseason.

Black bounced back to the bullpen to start 1988 but was traded to Cleveland in early June for infielder Pat Tabler. He pitched mainly out of the bullpen for the Indians to start, but did transition back into the starting rotation late in the season.

Black was solid in the 1989 and 1990 seasons with a bottom-dwelling Indians team. He was 23-21 over that time with a 3.44 ERA. The Toronto Blue Jays needed some pitching to help them get into the playoffs, and made a mid-September trade for Black. He appeared in three games, including two starts. His last outing was one of his best for the season, eight innings of three-hit ball against Baltimore. Ultimately, though, the Blue Jays finished in second behind the Boston Red Sox.

After the 1990 season, Black signed a four-year, $10 million contract with the San Francisco Giants. Up to that point, Black was 85-83 over nine seasons, and had won only 42 games the previous five seasons combined. An anonymous National League general manager panned the signing, saying, “Maybe Bud Black will win some games for the Giants, but it looks like one of the worst signings ever.”4

Black’s first two seasons with San Francisco were mediocre. He went 22-28 but pitched almost 400 innings. The 1993 season started well, but he could not shake the injury bug. Black went on the disabled list three times during the season for elbow trouble and he did not pitch after August 3. In late September he underwent surgery to repair a tendon in his left elbow.5 Then before the 1994 season, he had arthroscopic knee surgery.6

Black did not pitch until June 1994 and made 10 appearances before the season was cut short by the players strike. During the offseason, he signed a minor-league contract to go back to the Indians in 1995 but made only 11 appearances with the Indians before being released on July 14.

The Los Angeles Angels named Black their pitching coach in 2000, and he helmed the mound staff that helped lead the Angels to the 2002 World Series championship. His teams finished in the top five in ERA five of his seasons. He coached Bartolo Colon during Colon’s 2005 Cy Young season. This success led to Black’s being considered for many managerial openings. In 2002 he was a candidate for the Cleveland Indians managerial position, but later declined to continue further with the process.7 In 2005 he declined to be interviewed for the Los Angeles Dodgers’ managerial position, citing family reasons.8 In 2006 Black was a candidate for the San Francisco Giants opening, as was then-Padres manager Bruce Bochy.9 When the Giants signed Bochy, the Padres turned to Black. Black was named manager of the Padres on November 6, 2006.

The 2007 season was an odd one for the rookie manager. On September 23 he had a role in one of the stranger incidents in baseball. Outfielder Milton Bradley was involved in an altercation with first-base umpire Mike Winters, accusing Winters of saying that Bradley threw his bat at an umpire.10 In an attempt to subdue Bradley, Black pulled him away. Bradley’s knee buckled. That knee ultimately cost Bradley the rest of the 2007 season and may have cost the Padres a shot at the playoffs. They were 2½ games behind the first-place Arizona Diamondbacks, and had a half-game lead over the Philadelphia Phillies. The Padres and Rockies played in game 163 to decide which would be the wild-card team. The Rockies came into the game having gone 13-1 in their last 14 games. The Padres took the lead in the top of the 13th on a two-run home run by Scott Hairston, but usually steady closer Trevor Hoffman gave up three runs in the bottom half of the inning, sending the Rockies into the playoffs (and eventually the World Series). Matt Holliday scored the winning run on a sacrifice fly by Jamey Carroll, sliding head-first into home. Replays were inconclusive as to whether Holliday had actually touched home or not.

Black narrowly missed taking the Padres to the playoffs in 2010. Going into the final weekend, the Padres were three games behind the Giants for the NL West title. The Padres won the first two, but dropped the last game, giving the Giants the division. Despite not making the playoffs, Black was named 2010 National League Manager of the Year, going 90-72. This was Black’s last winning season as a manager. His 2011 Padres team went 71-91, while his 2012 and 2013 teams went 76-86, and the 2014 team was 77-85. During the offseason before the 2015 season, the Padres made bold moves, including acquiring closer Craig Kimbrel, outfielders Matt Kemp and Wil Myers, and catcher Derek Norris. The Padres were 32-33 to start the season before Black was fired.

Black was not out of work for long. He was a candidate for the Washington Nationals' open managerial position and was the leading choice by all accounts.11 Black had accepted the position, but contract negotiations broke down.12 The Nationals eventually hired Dusty Baker, while Black returned to the Angels as a special assistant to the general manager.

Black became a leading candidate for the Colorado Rockies managerial job when Walt Weiss stepped away after the 2016 season. On November 7, 2016, the Rockies made the hiring of Black official.13

The Rockies got off to a hot start and were leading the West at the end of April. The Rockies, Diamondbacks, and Dodgers fought for first throughout the first half of the season, until the Dodgers pulled away from the rest of the division en route to an eventual National League pennant. Black did lead the team to an 87-75 record, and a berth in the wild-card round against the Diamondbacks. The Rockies fell behind 6-0 in that game but fought back. “Right away, all hell broke loose and from there on it was a heavyweight fight,” Black said after the game. “We got close a couple times, they stretched the lead, we came back. It was a crazy game.”14 Their efforts fell short, as they lost 11-8.

In 1992, Black was inducted into San Diego State Athletics Hall of Fame.15 He and his wife, Nanette, donated money to fund an alumni room at San Diego State’s Tony Gwynn Stadium.16

In addition to the sources cited in the Notes, the author also used the following: