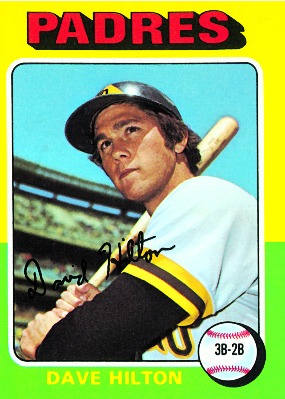 On October 10, 2008, the University of California at Berkeley honored the legendary Japanese author Haruki Murakami with the inaugural Berkeley Japan Prize, presented by the Center for Japanese Studies. Speaking to the university students earlier in the day, the Nobel Peace Prize-nominated Murakami was asked about “the revelation which led him to writing” at the age of 29.

In reply, Murakami described an afternoon spent watching his favorite baseball team, the Yakult Swallows. On this particular day in 1978, an American player on the team, third baseman Dave Hilton, lined a double down the left-field line. Murakami explained the moment thusly: “On that sunny day drinking beer, I just knew I could write.”1

The first of five sons born to educators George “Gus” and Maxine Hilton, and the nephew of the late Leonard Hilton, a noted track and field athlete who raced in the 1972 Olympics, Dave said he “wanted to be a pro player” since “falling in love with baseball at the age of six.”3 His father, Gus, recognizing  that if Dave was to have a chance at getting a college scholarship to play ball, he had to be in a larger city where he would have more opportunities to play, resigned from his position as superintendent of the Central Texas School System and took a job in Houston.

At Jesse Jones High School, Dave played baseball for local legend Bragg Stockton. (Jesse Jones won four district titles between 1965 and 1969.) Hilton was not only a two-time All-State performer as a third baseman, but a dean’s list performer in the classroom. Upon graduation he accepted a full scholarship to Rice University. Following his freshman season, a year in which he “played pretty well,” Hilton spent the summer playing in Liberal, Kansas, in the semipro Jayhawk League.

“We were loaded with guys who would go on to play pro ball,” Hilton recalled. “Our manager was Bob Cerv, the old Yankee outfielder, and (future major leaguers) Ron Guidry, Phil Garner, and Steve Rogers were teammates.” The Liberal team won the state tournament behind Hilton’s 16-for-21 performance at the plate and went on to finish second in the National Semi-Pro Tournament.

When he reflected on his summer performance after returning home to Houston, it dawned on Hilton that “I was good enough to play” against top competition, and he decided he wanted to play professionally, and as soon as possible.

There was a hurdle to overcome, however. Under the draft rules of the day, a player who attended a four-year university was not eligible unless he had turned 21 or completed his sophomore season. Hilton was still enrolled at Rice and had just turned 20; thus he was ineligible under both rules. At that time though, the major leagues conducted two drafts each year, the regular June phase still in existence and a smaller January phase. The January draft allowed teams to draft players from the previous calendar year who hadn’t signed, as well as players who weren’t otherwise eligible the previous June.

The solution for Hilton and others in similar situations was to leave their four-year school and enroll in a community or junior college. Hilton enrolled at Southwest Texas Junior College in Nolan Ryan’s hometown of Alvin, Texas, and became eligible for the January 1971 draft. (That draft was the first to be conducted by conference call. Previously, team representatives gathered in New York and made their selections in person. This time teams made their picks by phone.)

By virtue of their National League-worst 63-99 record, the San Diego Padres had the first pick in the draft, and farm director Peter Bavasi and chief scout Bob Fontaine, on the recommendation of Jack Bloomfield, chose Hilton.4 Hilton signed with the Padres a few weeks later and, as part of his signing “bonus,” reported to major-league spring training in Yuma, Arizona, as a nonroster player.

After experiencing life as a major leaguer for a few weeks, the 20-year-old Hilton was assigned to Lodi of the California League, where he played in 128 games and hit .247 with 12 home runs and 86 runs scored. His status as a prospect took off the following season, 1972, when he played for Alexandria in the Double-A Texas League, hit .315 with 16 home runs, and was named the Texas League All-Star third baseman and Player of the Year. Called up to the Padres in September, Hilton made his major-league debut on September 10 against the Atlanta Braves in San Diego. Starting at third base and hitting seventh, he picked up his first major-league hit, a fifth-inning single off Braves starter Ron Reed.

Reporting to spring training in 1973 full of confidence from his experience the previous fall, Hilton played so well that he made the Padres’ roster as the starting third baseman. On April 29, playing in Wrigley Field against the Chicago Cubs, Hilton hit his first major-league home run, off future Hall of Famer Ferguson Jenkins. He played well defensively, but struggled with the bat and was sent to Triple-A Hawaii at the end of May. He played 43 games with the Islanders before once again finding himself on the move, but it wasn’t back to San Diego, it was back to Alexandria, where he was to learn a new position, second base. Hilton again returned to the Padres after the roster expansion in September and finished out the season as the team’s regular second baseman.

The 1974 season for Hilton was almost a mirror of 1973. He was the Opening Day starter at third base and played pretty regularly before being sent to Hawaii on May 13, again due to struggles at the plate. He split the season equally, playing 74 games in both Triple-A and the major leagues. During his half-season appearance with the Islanders, Hilton played well enough (.328) to be named to the Pacific Coast League All-Star team.

The 1975 season started the same as the previous two. Hilton made the Padres out of spring training, although this time as a reserve. He felt, however, that he was ready for the major leagues. Almost immediately, things started to go wrong. During the Padres’ first road trip of the season, to San Francisco, Hilton caught a bad break. After he and a teammate had a seafood dinner, Hilton became ill and was taken to the emergency room. After tests he was diagnosed with infectious hepatitis from spoiled seafood and missed the next two weeks. Finally mustering up enough strength to play, Hilton started in the first game of a doubleheader against the Atlanta Braves in San Diego on April 27 and went 0-for-5. He played in the ninth inning of the second game. Hilton would not play again for three months, returning with Double-A Alexandria in August. After he regained his strength, the Padres sent Hilton to Hawaii, where he helped the Islanders win the first of two consecutive Pacific Coast League championships. But the April 27 games were his last in the major leagues.

As spring training started in 1976, a new face on the team was five-time Gold Glove third baseman Doug Rader, acquired from the Houston Astros in an offseason trade. The year before the Padres had obtained second baseman Tito Fuentes from the San Francisco Giants. For Hilton, the two transactions effectively blocked him from the two positions he had played during his time in the organization. He spent the entire 1976 season in Hawaii, once again being named to the PCL All-Star team and picking up his second consecutive championship ring.

Peter Bavasi, who had drafted Hilton for the Padres in 1971, had by this time left San Diego for the expansion Toronto Blue Jays, who were to begin play in the American League in 1977. Long a fan of Hilton, both as a player and a person, Bavasi purchased him, along with infielder Dave Roberts and outfielder John Scott, on October 22, 1976. Excited for the opportunity to re-establish his career, Hilton reported to spring training, for the first time in Florida, determined to make the Jays’ roster. Shortly before the Jays broke camp, Hilton was informed that not only had he made the team, he would be the Opening Day third baseman. There was one small problem, however: Hilton had yet to sign a contract for the season.

Most of the players in Toronto’s camp that spring were free agents. Hilton fit into that group. What the Jays had done when everyone reported was offer “split” contracts: If you made the team you received major-league benefits and pay, if not, then you played under much different minor-league rules. Feeling that he had played well enough – after all, he had won the third-base job – Hilton wanted a major-league-only contract. Despite his relationship with Bavasi, the Blue Jays declined to change the terms of Hilton’s contract, instead sending him to Triple-A Toledo.

After initially refusing to go, Hilton finally reported to the Mud Hens. He earned the Triple-A Silver Glove for defense at third base, and once again became a free agent after the season. The Chicago White Sox selected Dave in the minor-league free-agent draft in December 1977, and as spring training approached, an unexpected opportunity came knocking: a job with the Yakult Swallows of the Japan Central League.

The decision to uproot his family and move to a foreign land was a difficult one. In 1974 Dave had married Patricia O’Neill of Phoenix, and they now had a one-year-old son, Matthew. (They subsequently had two daughters, Megan and Amy.) The Swallows offered Hilton the security of a two-year contract for “two or three times” what the White Sox had proposed, so off to Japan they went.

Hilton spent the next 2½ seasons in Japan, winning a championship with Yakult his first year, then moving to Hanshin in a trade after his contract ran out. In midseason of 1980 Hanshin wanted to sign a Japanese player and demote Hilton to the minor leagues. Hilton refused to go to the minors. The team released him after paying his salary for the rest of the season. Hilton returned to the US and signed with the Pittsburgh Pirates, who sent him to Triple-A Portland. He spent the rest of the 1980 and all of the 1981 season and won another Silver Glove for defense at third base. He played for the Mexico City Reds of the Mexican League in 1982.

In the days before big-money contracts, major-league players often found themselves working an offseason job to make ends meet. Hilton was not one of them. “I was lucky enough to always find a place to play,” he said. “Puerto Rico, Mexico, Venezuela, I played year-round.”

After the 1982 season, Hilton took a year off from baseball. The Minnesota Twins offered him a job managing Visalia of the Class A California League in 1984. For the next 20 years he managed, coached, and worked as a roving hitting and infield instructor for the Braves, Giants, Phillies, and Athletics. Hilton also spent 1987 and 1988 as the first-base coach for the Milwaukee Brewers and managed in Taiwan for four years.

In 2012 Hilton returned to uniform as the manager of the Sonoran Explorers of the independent Freedom Baseball League, whose teams are based in the Phoenix area. He also operated the Arizona School of Baseball, in Scottsdale.

All quotes in this biography come from Dave Hilton’s self-authored bio page on his website, www.arizonaschoolofbaseball.com, and from the author’s interview with Hilton on November 13, 2012.

3 http://www.arizonaschoolofbaseball.com. The Arizona School of Baseball is operated by Hilton.