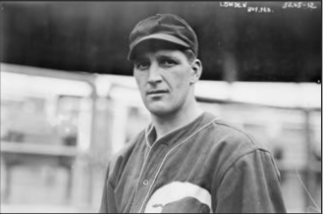 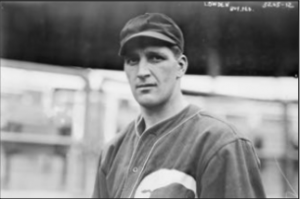 Several incidental details about William P. “Baldy” Louden Jr.’s life have been muddied by the march of time. Meticulous research failed to discover, for example, what the middle initial “P” stood for, or how a man with a full head of hair acquired the nickname Baldy. Even his date of birth is uncertain. Though various sources agree that his birthday was August 27, they differ on whether it was in 1883, 1884, or 1885.

What is certain is that Louden was one of five children of William P. Louden Sr. and Agnes (Pringle) Louden. They had married in Kinningpark, Glasgow, Scotland, on July 8, 1875, and came to the United States four years later, along with their daughter, Elizabeth, and son, Robert. They settled in Pittsburgh, where William found work as a carpenter and where three more children – Agnes, William Jr., and Thomas – were born.

“Billy” Louden grew up playing ball in the Northside neighborhood, and “got his start with the Allegheny Hilldales, then regarded as the outstanding sandlot team of the Smoky City.”1

A right-handed-hitting infielder, Louden turned semipro in 1904 when he signed with the Piedmont (West Virginia) club in the Cumberland & George’s Creek League. He played with that club again in 1905 when it moved to the Pennsylvania-Ohio-Maryland League. During his two seasons in Piedmont, Louden met Georgia Pearl Kight, the daughter of a local machinist.2 Bill and Pearl were married on November 1, 1905, in Mineral County, West Virginia.

Louden became a full-fledged pro in 1906, getting into a total of 123 games while splitting the season between the Greenville Hunters and the Dallas Giants, both unaffiliated Class-D clubs in the Texas League. He re-signed with Dallas for the 1907 season at a salary of $150 a month, and batted .276 with 5 home runs in 140 games – solid statistics but hardly impressive. It was Louden’s stellar defense at shortstop and third base that caught the eye of “one of Clark Griffith’s scouts who [had] been scouring the country for good material.”3 Griffith was then the manager of the American League’s New York Highlanders, and purchased Louden from Dallas on August 4, 1907, with the agreement that he would finish out the Texas League season and then report to the Yankees (as they were often called at the time, unofficially) in September.4 Louden made his major-league debut on September 13, 1907, at Hilltop Park in Manhattan, in a 10-2 loss to the Washington Senators. Griffith gave him a very limited trial (only 11 plate appearances over four games) before selling him after the season to the Montreal Royals of the Eastern League.

Class-A pitchers presented a problem for Louden in 1908; he batted .197 and slugged .275 for Montreal. He returned home to the United States the following year, and his hitting marginally improved. As the everyday shortstop for the Newark (New Jersey) Indians of the Eastern League, Louden batted .213 in 1909 and .236 in 1910. Finally, in 1911 he had his breakthrough season: a .303 average with 32 extra-base hits and 31 stolen bases for Newark.

In January of 1912 Louden was rewarded with his first major-league contract, agreeing to a $2,250 salary from the Detroit Tigers. Asked to comment on the signing, longtime manager George Stallings (who had managed against Louden in the Eastern League) said, “Louden is a natural ballplayer. He is not only a brilliant fielder but a hard and consistent hitter, a fine base runner, and adept at inside baseball. He is a player who has developed slowly and for that reason is steady. Last season he found himself.”5

Louden was Detroit’s Opening Day third baseman in 1912. Batting second (in front of Ty Cobb), he went 0-for-5 in an extra-inning loss in Cleveland. Two days later, he collected three hits and scored three runs in the Tigers’ first win of the year, and tightened his grip on the starting job. In June Louden shifted to second base, supplanting veteran Jim Delahanty. His first big-league home run came at Fenway Park on July 15, in a 6-4 win over the Red Sox. Although the Tigers dropped out of contention in the second half, Louden finished strong, wrapping up his rookie season with a line of .241/.352/.298 and 27 stolen bases in 122 games. A strong negotiator, Louden parlayed that performance into a 20 percent raise – a salary of $2,700 for 1913. Once again he fought his way into manager Hughie Jennings’s lineup on Opening Day. But a slow start with the bat soon cost Louden his job. Twenty-three-year-old Californian Ossie Vitt took over at second base, condemning Louden to spend the bulk of the season on the bench. Vitt struggled offensively too, but “was considered a smarter infielder and so was kept for the job with the Tigers, while Louden was sent to Providence. This setback to the minors caused him to jump to the Feds.”6

Indeed, Bill Louden felt he had proved himself a capable big leaguer, and given the choice between playing the 1914 season in the minor leagues or in the new “outlaw” major league that was the Federal League, he understandably chose the latter. Like so many others that winter, Louden “violated his reservation,” lured by an offer of a much higher salary than he would have earned in Organized Baseball.” He jumped at the opportunity to sign a three-year contract for $3,600 a year with the Buffalo Buffeds, then played in 126 games at shortstop in 1914, and had the best year of his career. His .313 batting average, 6 home runs, 63 RBIs, .391 OBP, .399 SLG, and 35 stolen bases were all personal bests. Louden’s second season with Buffalo (the team was now called the Blues) in 1915 was equally successful. His batting average fell to .281 but Louden “played second base, third base, and shortstop, and did well at all positions. He led all the second-sackers of the Federal League in fielding, and led also all the third basemen.”7

When the Federal League folded after the 1915 season, Louden’s contract with the Blues was put up for sale to the American and National League clubs, with the Cincinnati Reds outbidding two other clubs.8 So Louden must have been dismayed when he went to his mailbox on West Fairview Street in Piedmont, West Virginia, one day in February of 1916 and found a letter from Reds President August “Garry” Herrmann, in which Herrmann had the audacity to:

Louden quickly scribbled out an answer, politely exclaiming, “I am more than surprised to learn of a cut, as I was under the impression that I was worth an increase instead.”10 Ultimately Herrmann relented, agreeing to assume the full value of the contract, and Louden agreed to report to the Reds’ training camp.11

In his National League debut, on Opening Day 1916 at Redland Field, Louden drove in Cincinnati’s only run in a 7-1 Cubs victory. He and his teammates were destined to suffer through 92 more defeats, and finish tied for last place. At least Louden’s only home run of the year, on June 1, “was a joyous feature of the season,” according to the Pittsburgh Gazette Times – the newspaper of Louden’s hometown, but at the same time a league rival city. “It was at Forbes Field, just as the fortunes of a hard-fought game were wavering in the scales,” the paper wrote. “Louden drove a nice hit down the field, and, just as the ball came along, an employee of the Pittsburgh ball club happened to open a tiny gate, through which he desired to roll a wheelbarrow. The ball leaped through the opening and disappeared; Louden trotted round the bases, and the sound of loud warfare behind the gateway told what the Pirate outfielders were doing to the luckless opener of the portal.”12

After his fortuitous round-tripper, Louden’s “hitting fell away towards mid-summer and finally dwindled to a vacuum,”13 and he batted just .219/.313/.280 overall for the 1916 season. Since that was the final year of his Federal League contract, the Reds would surely cut his salary this time, now that they had the power to do so. Yet, perhaps emboldened by his success the previous winter, Louden stood firm, and held out, saying, “I feel as though I am entitled to last year’s figures.”14 Herrmann responded by selling Louden to a minor-league club in the American Association. Some confusion ensued as to which club it was, with Kansas City and St. Paul each believing that they had agreed to the purchase. Louden humbly asked for a friendly favor from his former employer and adversary, Herrmann, writing, “I prefer going to St. Paul as it would be more convenient for Mrs. Louden to make the trips on account of her just undergoing an operation recently. Kindly inform me if you can do anything in the matter.”15 Herrmann kindly returned the money and players he had received from Kansas City, and finalized the deal with St. Paul instead.16 But for whatever reasons – his wife’s health, his frustration with the baseball business, his own declining skills, or the US declaration of war against Germany – Louden chose to hang up his spikes in May of 1917 without ever playing in a game for the Saints.

By July 1918 when all able-bodied American men were ordered to “work or fight,” Louden was doing his part to help defeat the Kaiser by working in a munitions plant for Standard Manufacturing Company of Pittsburgh. After the war ended in November, the Loudens returned to their home in Piedmont, where Bill settled into a life as a small-town auto mechanic and opened his own garage. His last flirtation with professional baseball came in 1920, when some friends persuaded him to take over as manager of the nearby Martinsburg Mountaineers, one of six teams in the newly organized Blue Ridge League. That spring, while searching for players for his new squad, Louden discovered a lanky left-hander pitching for a B&O Railroad yard team, and immediately signed the kid for $125 a month.17 In Bobby Grove’s first pro start for the Mountaineers, he pitched a complete-game six-hitter and struck out 10 – and lost! Less than six weeks later, Louden reluctantly parted with his young phenom because “the club needed money. Martinsburg had started [the season] on the road, until local businessmen bought a plot of land and laid out a small grandstand. All that was lacking was a fence.”18 And so, while having lunch with Baltimore Orioles owner Jack Dunn, Louden sold the future Hall of Famer Lefty Grove in exchange for a fence to be installed at the Martinsburg field.19

After that 1920 season with Martinsburg (during which he was the team’s primary second baseman, as well as its skipper), Louden “tired of the managerial end of the game”20 and returned to work at his garage in Piedmont. There he lived with his wife, Pearl, as an active citizen of the community – a member of the Presbyterian church, the Knights of Pythias, and the Fraternal Order of Eagles, not to mention “helping out the sandlot teams in town in one way or another.”21

On the evening of December 8, 1935, he died in his home on West Fairview Street “following an illness of nearly two years’ duration. Although he had been confined to his home for the greater part of his illness, his death was unexpected.”22 His obituary stated that he had been “called out by the Great Umpire.” He was (probably) 52 years old. Bill Louden was buried in Philos Cemetery, just across the state line in Westernport, Maryland. Pearl was buried alongside him when she died at the age of 80 in 1966.

In addition to the sources cited in the Notes, the author made use of baseball-reference.com, US Census and military draft records, and papers (including the correspondence with August Herrmann) contained in Louden’s player file at the National Baseball Hall of Fame Library in Cooperstown, New York.

5 Unidentified newspaper clipping from January 1912 in Louden’s player file at the Hall of Fame.

6 Unidentified newspaper clipping from January 1916 in Louden’s player file at the Hall of Fame.

16 Transaction sheet in Louden’s player file at the Hall of Fame.