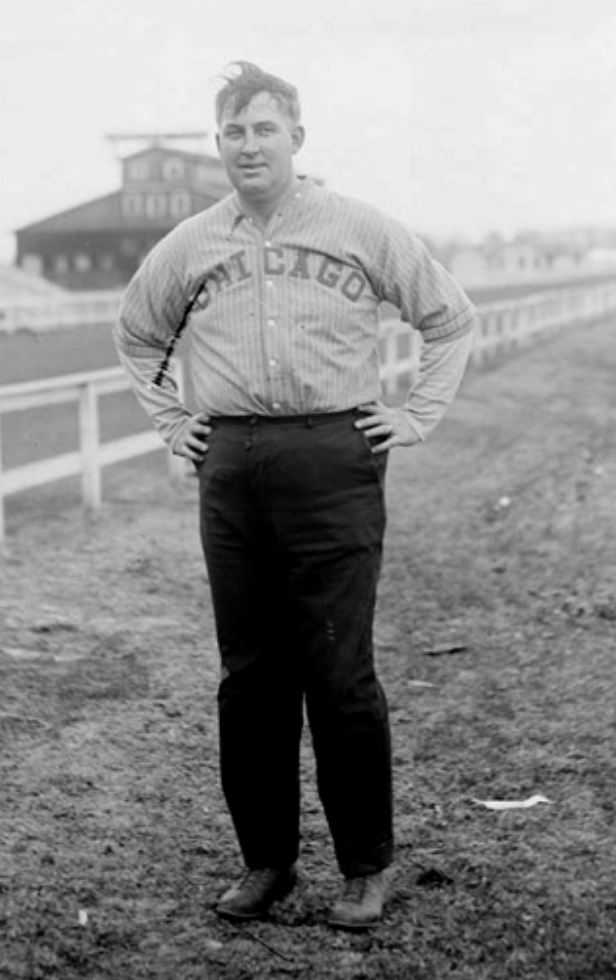 “Big Bill” Brennan was a large man, weighing 235 pounds and standing 6-foot-2½. He had a loud voice and could be heard all over the ball field. Brennan’s voice served him well not only as an umpire, but also as a football coach at the University of Tennessee Medical College.

Brennan was born on October 25, 1880, in St. Paul, Minnesota. He played first base briefly for a team in Cavalier, North Dakota in 1899, but by the next season Brennan had embarked upon an umpiring career. Over the next decade, Brennan gained a wide range of minor-league officiating experience. From 1900 to 1901, he umpired in the Northern League. Then he moved to the Iowa State League for three seasons, before spending 1905-1906 with the Western Association. From 1907 to 1908 Brennan umpired in the Western League, and then called them in the Wisconsin State League in 1909.1

Brennan was developing well as an umpire, never leading the league in ejections and steadily becoming a fine caller of balls and strikes. In 1910 Brennan was behind the plate in 35 games, the next year he was plate umpire 43 times. In 1912 he umpired at the plate for 89 contests and in 1913 he was on the plate for 126 games. But Brennan’s life as a National League umpire would be cut short at the end of the 1913 season.

The turning point was an August 30 game at the Baker Bowl in Philadelphia between the Phillies and New York Giants. At the top of the ninth inning with New York down 8 to 6, manager John McGraw, claiming Giant hitters were being distracted, asked plate umpire Brennan to have spectators removed from the center-field bleachers. Phillies acting manager Mickey Doolin refused to do so and Brennan forfeited the game to the Giants. Brennan was assaulted by fans as he tried to board a train out of Philadelphia and had to receive a police escort.

The Phillies appealed to National League President Thomas Lynch, who reversed the ruling, awarding the game to the home team. The Giants appealed to the League’s Board of Directors. The Board ruled that both Brennan and Lynch were in error and on October 2, the game was re-started, at the same point in the ninth inning that play concluded on August 30. No further scoring occurred, and the game went to the Phillies.2

This particular game would have great impact on the careers of both Lynch and Brennan. For Lynch, it cost him his job. He went back to Connecticut to run a theater business. For Brennan, it meant a change in employment. He left the National League to become chief umpire for the newly formed Federal League.3

Putting together an umpire staff in a new major league was a tall order. The first thing Brennan did was to choose umpires who had heft. He turned down Hank O’Day and Jack Egan simply because they lacked the physical size Brennan thought necessary. One sportswriter said, “To look at Brennan’s selections, the inference at first thought would be that they were entrants in the all-round athletic competition at Harvard or Yale, or members of a selected football eleven in the days of Heffelfinger and the tandem-tackle play.”4 The reference to Pudge Heffelfinger came from Heffelfinger’s play at Yale during the late nineteenth century as a guard.

The Federal League began 1914 with eight full-time umpires: Brennan, Monte Cross, Al Manassau, Ollie Anderson, Steve Cusack, Barry McCormick, Garnet Bush, and Steven Kane. But the president of the Federal League, James A. Gilmore, and Brennan had their hands full from the beginning with questionable umpiring. The first umpire to be relieved of duties was Steven Kane. An umpire in the National League in 1909 and 1910, and one of the highest paid umps in the Federal League, Kane had racked up 11 ejections when he was fired for health reasons on June 8. Tragically he died on October 30, 1915, of heart disease.5

The next week saw the end of umpire Garnet Bush. Bush, along with Manassau, had umpired the first Federal League game at Baltimore’s Terrapin Park on April 13. But after Bush ejected three St. Louis Terriers on May 26, then four Baltimore Terrapin players on June 8, and then threw out another five Terrapins on June 14, Gilmore had enough and Bush lost his job.6

At the end of 1914 season, Gilmore dismissed another three umpires: Cross, Cusack and Manassau. This left only Brennan, McCormick and Spike Shannon to be carried over for 1915. (Shannon, a former player with the Cardinals, Giants, and Pirates, became a Federal League umpire on June 28 after Kane and Bush washed out.7) They were supplemented, for the 1915 season, with William Finneran, Frederick Westervelt, Harry Howell, Louis Fyfe, and Jim Johnstone.8

In the midst of the Federal League’s second season, Brennan witnessed a pitching duel between former Philadelphia Athletics pitchers Eddie Plank and Chief Bender on June 26. Plank pitched for the St. Louis Terriers and Bender was on the mound for the Baltimore Terrapins, with St. Louis winning 2-0. Brennan said, “It was the hardest game I ever umpired. Neither pitcher grooved a ball in the entire game. They were cutting corners in an uncanny manner and when pitchers are pitching that way it is hard to umpire. I can easily see just why Plank and Bender have been leading pitchers for so many years.”9

Brennan was also partnered with Westervelt (the first game) and Johnstone (the final five) for the crucial six-game series between Chicago and Pittsburgh that concluded the 1915 season. The Whales won the Federal League pennant with an 86-66 record, St. Louis placed second at 87-67 and Pittsburgh placed third, 1/2 games off the pace, at 86-67.10

After the 1915 season, peace was achieved, and the Federal League was disbanded. Brennan had to find another job and worked in the Class C South Atlantic League in 1916. The Atlanta Constitution commented, “Bill Brennan, one of the best umpires who ever worked at that trade, had to take a job in a Class C circuit this year to get his bread and butter.”11

In 1917-18 Brennan umpired in the American Association at the Double A level, and then got a break in 1919 when he became umpire in chief in the Southern League. John D. Martin was president of the league and Brennan was not only the chief umpire but also was an advisor to Martin who needed help in running his league.12

Martin helped Brennan as well, and through his intercession Brennan received another chance to umpire in the National League in 1921.13 After umpiring pre-season games with the New York Giants he was hired and umpired 143 games with 99 games at home plate, 44 at first base and a single game at third base. Brennan’s return to the National League only lasted a year, mainly because of his Federal League stint.

During a game between the Reds and Pirates on May 28, 1921, Brennan called a Pittsburgh runner out on a ball which apparently had gone into the dugout. The Sporting News, which strongly supported major league owners and had opposed the Federal League on its pages, came down hard on Brennan: “There are a dozen better umpires in the minors today, and it is hard to understand why Brennan, who was disloyal to Organized Baseball when the Feds came into existence, should be rewarded by a position on the staff at this time when he is absolutely incapable of filling it.”14

Brennan went back to the Southern League the next year and remained as umpire in chief until his death in 1933. He also had another job during the off-season. From 1921 through 1926 he coached football at the University of Tennessee Medical College in Memphis. In 1921, the Doctors listed three wins, two losses and a tie. Brennan was called ‘Uncle Bill,’ and helped the school gaining prominence and popularity during the years he led the program.

According to a school publication titled “75th Anniversary—Medical Accomplishments” enrollment had climbed to 178 students as the football program under ‘Uncle Bill’ gathered success. The Doctors eventually had a winning streak of 33 games, scoring 500 points and allowing 44 over this span.15

Dr. Sam Sanders commented, “Practice time was limited since all players were required to attend classes regularly, complete all class work, and make up any work missed on away games. Coaching consisted of primarily developing teamwork. No one could have done a better job than our coach, ‘Uncle Bill’ Brennan. ‘Uncle Bill’ was one of the few coaches that could have molded the great array of football talent in the powerful working unit that it was.”16

For Brennan it was a continuation of his success on the gridiron. He began his football career at Mechanics’ Arts High School in St. Paul, coaching there from 1901 through 1902, then went to Central High School for another two years. Brennan coached semipro football teams in 1905 and 1906, then went back to high school, coaching at Eau Claire High School in Wisconsin until 1908. Brennan then coached a college team at Saint John’s University in Collegeville, Minnesota from 1909 to 1910. In 1919, he served on the coaching staff of Tulane University’s football program.17

Brennan was forced to sit out most of the 1933 baseball season and spent some time in Hot Springs, Arkansas. In early September he umpired the season finale between the Chattanooga Lookouts and the Knoxville Smokies. Three days later Brennan was taken to a hospital suffering from a ruptured ulcer. His wife, Florence, was in Minneapolis when he fell sick. She was on her way to Knoxville when he died on September 13th.18

Brennan had touched many people during his career. The Knoxville Evening Independent said Brennan had “…too stern a code of duty and too great a love of the game. He knew he was sick but wasn’t a quitter—a characteristic that bought him several of organized baseball’s biggest assignments and made him a coach with a reputation for turning out championship grid teams.”19

Memphis Press-Scimitar Sports Editor Bob Pique put it this way: “He had the appearance of being severe and autocratic out there on the ball field…Fans always knew when Brennan was handling a ball game that it would be well-officiated. He was fair and square, a fine sportsman and a gentlemen.”20

8 Baseball Hall of Fame Library, Bill Brennan Umpire File. Story published March 13, 1915, titled “The Umpire Staff,” nothing in file on what newspaper it appeared in.

9 Baseball Hall of Fame Library, Bill Brennan Umpire File. Story published August 14, 1915, titled “Wonderful Pitching by the Old Masters,” nothing in file on what newspaper it appeared in.

12 Baseball Hall of Fame Library, Bill Brennan Umpire File. Story published September 21, 1933, nothing in file on what newspaper it appeared in.