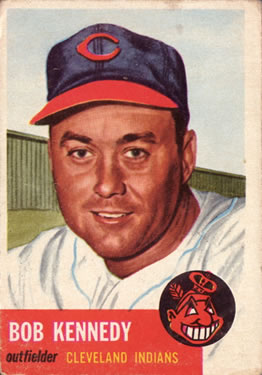 Bob Kennedy, whose 16 major-league seasons included one inning for the 1954 Cleveland Indians, was a journeyman pro who managed only a .254 batting average in his 16 seasons with the Indians, Chicago White Sox, and three other teams, isn’t likely to find a niche in the Baseball Hall of Fame. In a way this is too bad because if Kennedy gained admittance into the Cooperstown shrine, he would bring with him a number of distinctions. In no particular order:

Robert Daniel Kennedy was born on the South Side of Chicago on August 18, 1920. As he grew up into a strong, hard-throwing teenager playing amateur ball in and around Chicago there were times he was held out of games because one of the banned Black Sox, Buck Weaver, was playing that day. According to Bob’s son Terry, himself a major-league player and minor-league manager, Bob was held out of those games by his coaches because anyone who played in a game with Weaver could be banned from the major leagues, and Bob was thought to have a future in the big leagues.

As a youth Kennedy was a top pitcher, throwing numerous no-hitters, in American Legion ball and it was clear that his strong arm was noticed.  Only 16 years old, he was signed as a third baseman in 1937 by the hometown White Sox, who were seeking to curry favor with a dwindling fan base following nearly two decades of second-division teams. The White Sox sent him to play for the Vicksburg (Mississippi) Hill Billies in the Class C Cotton States League.  He struggled against professional pitching, batting just .192 in 41 games with no home runs. A clear sign that the White Sox had their eye on him was the fact that despite his difficult start, Kennedy was promoted before the end of the season to the Dallas Steers of the Class 1A Texas League, at that time the second highest classification in the minor leagues. In Texas he hit better, raising his average to .300, but still with no power (just one extra-base hit in 60 at-bats).

In 1938 Kennedy played for the Longview Cannibals in the Class C East Texas League.  The line-drive hitter batted .261 in 136 games and tied for the league lead with 14 triples. He led the league in putouts and assists at third base and it was becoming clear that fielding and throwing were his strengths, although he made 41 errors that season. In 1939 Kennedy played again in the Texas League, for the Shreveport Sports.  He was making more contact (.284 batting average with eight home runs. The White Sox called Kennedy up in September and he made his major-league debut on September 14, 1939, at the age of 19, making an iut as a pinch-hitter.  He stood 6-feet-2 (6-feet-3 according to some sources) and weighed about 190 pounds.

In 1940 White Sox manager Jimmy Dykes moved third baseman Eric McNair to second base and installed the teenage Kennedy at third base. Kennedy played in 154 of the team’s 155 games (one no-decision) at third base, and led the team in at-bats. Kennedy was a consistent if unspectacular performer, hitting .252 with three home runs and 52 RBIs.  He led the league with 178 putouts and 33 errors at third base.  Perhaps surprisingly, he received three points in the American League Most Valuable Player voting, tied with Charlie Gehringer and Joe Gordon for 23rd place. He would never again receive any consideration for MVP.

On June 2, 1948, Kennedy was traded to the Indians for outfielder Pat Seerey and pitcher Al Gettel. With Cleveland he was a reasonable contributor in the team’s successful run for the pennant and the world championship, batting.301 playing part-time in the outfield and in a handful of games at first base and second base. In the World Series, Kennedy was used as a defensive replacement in three games, and had an RBI single in Game Two.

Kennedy often called his years in Cleveland the best of his career.  From 1949 through 1951 he had the best years of his career. His batting average improved. He was the regular right fielder those years, but also returned to third base for 21 games in 1949.  He started a triple play from right field in 1950. In 1952, after playing in 22 games, Kennedy was recalled to military service during the Korean War, as were Williams, Coleman, and Merriman. Kennedy returned to the Indians in 1953 and played in 100 games, batting .236.

As the Indians embarked on their 111-victory 1954 season, Kennedy appeared in only one early-season game in left field, and on April 17 he was traded to the Baltimore Orioles for Jim Dyck who, like Kennedy, played both outfield and third base.  Kennedy did well for the first-year Orioles, belting the franchise’s first grand slam off Allie Reynolds of the Yankees on July 30.  He had a solid year as a backup third baseman and outfielder, batting.251 in 106 games. But at the age of 33, he was on the downside of his career and did not play as a regular again as he switched teams each year from 1954 through 1957.

Kennedy played in 26 games for the Orioles in 1955 before being sold back to the White Sox on May 30. With the White Sox he appeared in 83 games, hitting .304. Overall in 1955, playing in 109 games at first, third, and the outfield, he tied his career high with nine home runs. Early in the 1956 season Kennedy was traded along with infielder Jim Brideweser and pitcher Harry Byrd to the Detroit Tigers for infielder Fred Hatfield and outfielder Jim Delsing.  Just before Opening Day in 1957 he was released by the Tigers and immediately signed with the White Sox for his third stint back home.  He played little, and on May 20 was sold on waivers to the Brooklyn Dodgers. He played in only 19 games for the Dodgers, but was in the starting lineup on the last day of the season – the Brooklyn Dodgers’ last game before they became the Los Angeles Dodgers. It was at Philadelphia’s Shibe Park on September 29, and Kennedy batted fifth and played left field. He went 0-for-4, and in his last at-bat, also the last ever by a Brooklyn Dodger, Kennedy flied out to center field to end the game, a 2-1 loss for the Dodgers.  It was also the last at-bat of Kennedy’s 16-year playing career. He was released by the Dodgers on October 15. He had played in 1,484 games and batted.254 with 63 home runs and 514 RBIs.

The Indians hired Kennedy as a scout, and a year later they promoted him to assistant farm director.  Kennedy did a good job in these roles for the Indians. In 1962 he was named the manager of Salt Lake City in the Pacific Coast League, an affiliate of both the Indians and the Chicago Cubs. The next season he was hired as a coach on a unique Cubs team.

Innovative ideas do not always lead to the best results, as was shown with the Cubs in 1961 and 1962. Tired of losing, team owner Philip Wrigley decided to hire four “head coaches” in 1961 who would alternate as managers or “head coaches.” They were Vedie Himsl, Harry Craft, El Tappe, and Lou Klein. In 1961 the so-called College of Coaches led the Cubs to a seventh-place finish with a record of 64-90.  In 1962, with three “head coaches” (Tappe, Klein, and Charlie Metro), the Cubs finished seventh again with a 59-103 record, 42½ games behind the first-place San Francisco Giants and “good” enough to finish 18 games ahead of the record-setting expansion Mets.  In 1963 Wrigley’s innovation was scrapped and Kennedy was named the lone manager of the Cubs.

The 42-year-old Kennedy proved to be a good field general, turning the Cubs around to an 82-80 finish, 17 games behind the pennant-winning Dodgers, and in seventh place in a 10-team league.  Though a strong nucleus of a club was developing with Ernie Banks, Ken Hubbs, Ron Santo, Lou Brock, and Billy Williams, things went bad in 1964. National League Rookie of the Year Hubbs was killed in a plane crash in the offseason and the Cubs were frustrated with young Brock, and traded him in June for 18-game winner Ernie Broglio.  This looked like a great trade for the Cubs, but history revealed it to be a stellar trade for the Cardinals as Broglio soon faded and Brock went on to a Hall of Fame career with the Cardinals. The Cubs slipped to eighth place under Kennedy with a record of 76-86. Kennedy managed the 1965 Cubs for 58 games, leading them to a record of 24-32 (there were two ties) before moving to the front office as an assistant to the general manager.

After the season Kennedy moved on to the Dodgers’ system. In 1966, after an offseason managing an Arizona Instructional League team for the Dodgers, he managed the Dodgers’ farm team at Albuquerque to a third-place finish and a spot in the Texas League playoffs. This earned Kennedy a major-league coaching job with the Atlanta Braves in 1967 under manager Billy Hitchcock.  The Braves had a talented team but finished seventh, and Hitchcock and his staff were fired. Kennedy was quickly hired to manage the brand-new Oakland Athletics, relocated from Kansas City. The A’s had experienced a miserable end to the 1967 season in Kansas City as players rebelled against a suddenly ineffective manager, Alvin Dark, and finished in last place at 62-99. Kennedy was hired as a steadying force, and led a promising young A’s team to a huge improvement, finishing 82-80 in sixth place. Then, without explanation, Kennedy was fired by mercurial team owner Charlie Finley.

In 1969 Kennedy went back to scouting with the Cardinals.  In 1970 general manager Bing Devine promoted him to director of minor-league operations. In 1972 he was promoted to director of player personnel.  During this time Kennedy’s oldest son, Bob Jr., was drafted as a right-handed pitcher by the Cardinals. Young Bob played in the minor leagues for five seasons, and later worked for his father as a scout for the Cubs and Astros. Bob Sr. stayed in his front-office job until he returned to scouting in 1976 for the Cardinals.

Once again it was back to Chicago (for the fifth time) in 1977 as Phil Wrigley hired Kennedy as the general manager.  The Cubs were again mediocre in the mid-1970s after making a run at the pennant in 1969.  The Cubs showed early promise in ’77, leading the National League East from May through July, but they eventually faltered and finished 81-81 and in fourth place. During the 1977 season, Bob’s youngest son, Terry, was drafted in the first round by the Cardinals after an All-American season at Florida State in 1976. (He was named The Sporting News college player of the year.)  Terry was a catcher and had a 14-year career with the Cardinals, Padres, Orioles, and Giants. Bob remained the Cubs GM through 1981.  They finished no higher than third place and in last place twice during that time, including the strike-shortened 1981 season, after which Kennedy was fired.

From 1982 through 1985, Kennedy worked as vice president of baseball operations for the Houston Astros under general manager Al Rosen (whom he had backed up at third base for the Indians many years earlier). The Astros were on the verge of winning a division and contending for a pennant, but it would happen after Rosen and Kennedy departed for San Francisco in 1986.

From 1986 through 1992, Kennedy served under GM Rosen as the vice president of baseball operations for the Giants.  Success and a big turnaround for the Giants happened quickly with a division title in 1987 (they lost to the Cardinals in the playoffs), and then a pennant in 1989 followed by a sweep at the hands of the A’s in the World Series noted for being delayed for ten days by a major earthquake in San Francisco as Game Three was about to begin. The 1989 pennant was only the second in Kennedy’s career as a player or executive. Kennedy retired in 1992 at the age of 72, along with his 68-year-old friend and colleague Rosen, after 56 years in professional baseball.

Kennedy spent his retirement in Mesa, Arizona, where he had moved his family years earlier.  He died in 2005 at the age of 84.