This article was written by Steven Schmitt 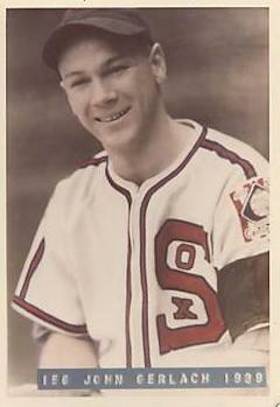 “He came back from the war, raised seven kids, practiced law and life moves on.”1

So said Madison (Wisconsin) attorney John Gerlach in a 2012 interview about his late father and law associate, Johnny Glen “Henna” Gerlach, who captained the 1937 and 1938 University of Wisconsin baseball teams (a .415 hitter his senior season of ’38) and joined the Chicago White Sox in late summer 1938 and played five seasons of professional baseball before going into military service in 1942.

Johnny was born on May 11, 1917, in the southwestern Wisconsin farm community of Shullsburg, where his father, John, Sr. was known affectionately as Pop, Jawn, and Mister Baseball for his local diamond exploits as a Home Talent baseball player and manager. He also owned a hotel bar that the Shullsburg Cheese Company bought years later and converted into a cheese plant. Gerlach’s Shullsburg nine dominated the Illinois-Wisconsin League in the mid-1930s with sons Johnny Glen at shortstop and Joseph at second base, and University of Wisconsin pitcher John Marriott on the mound. Son Charles “Chud” Gerlach was busy playing for Bloomington in the Three-I League in 1937 when “Pop” was Shullsburg’s starting catcher, batting .350 as of July 14, 1937, at the age of 46.2 In 1939, Gerlach, Sr. served as commissioner of the 11-team league.3Young John’s baseball career began auspiciously when he pitched a one-hit, 5-0 shutout of Blanchardville. Gerlach graduated from Shullsburg High School at age 16 in 1934 and had hoped to play football at Wisconsin for coach Clarence “Doc” Spears. Then-UW baseball coach Irwin “Irv” Uteritz, a former University of Michigan shortstop and later head baseball coach at Cal-Berkley, persuaded Gerlach to play baseball at Wisconsin. Gerlach’s older brother, Charles, had started as a Badger outfielder, batting .405 in 1934 and hitting a home run in each game of a doubleheader against Michigan in 1935, raising his average that day to .395.4

John joined the varsity in 1936 after playing on Arthur “Dynie” Mansfield’s freshman team in 1935. He captained the Badgers for coach Lowell “Fuzzy” Douglas in 1937 and 1938. A successful spring trip to Michigan in 1938 highlighted Gerlach’s UW baseball years. The Badgers swept both Michigan and Michigan State. In the first game against MSU Normal, “Stumpy” Gerlach drove in the winning runs with a two-run double.

Gerlach originally signed with the Class C Portsmouth (Ohio) Red Birds of the Middle Atlantic League, then became one of 91 players that Baseball Commissioner Kenesaw Mountain Landis declared free agents after learning that the St. Louis Cardinals and the Cedar Rapids (Iowa) club had violated minor league working agreements with major league affiliates, affecting 24 minor league clubs in all, in an attempt to cover up particular players. None of the players could sign with St. Louis or Cedar Rapids beyond the 1938 season.5 It was not the only time a Landis decree would affect Gerlach’s baseball career.

Ultimately, Gerlach signed with the Chicago White Sox. In 1938, he batted .302 in 66 games at shortstop for the Class A Wilkes-Barre Barons in the Eastern League. On September 3, he was called up to the White Sox along with catcher Mike Tresh, first baseman Merv Connors and second baseman George Meyer. Gerlach became the sixth youngest player in the majors at 21 years, 115 days. That day in Chicago, Gerlach ran for pinch-hitter Larry Rosenthal in an 11-4 loss to the Detroit Tigers. On September 15, Gerlach went two-for-five in the leadoff spot with the only RBI of his career as the Sox beat the Philadelphia Athletics, 5-4. Chicago Daily News sportswriter Wayne K. Otto referred to the 1,000 or so customers as ”polar bears” who witnessed the win on a cold April day at Comiskey Park. 6 After going hitless in seven at-bats against the A’s in his next two games, Gerlach went three-for-five in his next two starts against the St. Louis Browns and started the final three games of the season, finishing seven-for -25 (.280).

On January 8, 1940, Landis voided a trade involving Gerlach and five minor leaguers for former Cleveland Indians shortstop Jimmy “Skeeter” Webb, believing that the White Sox were “railroading” Gerlach out of a chance at the major leagues by trading him along with lefty pitcher Tom Reid (who had pitched against Gerlach at the University of Iowa) to the St. Paul Saints of the American Association. Landis ruled that the White Sox should invite Gerlach to spring training for a tryout. 8 On February 19, 1940, White Sox executive Harry Grabiner offered Gerlach $400 a month to join the White Sox for spring training. “If you are retained by the Chicago Club after June 15th, your salary will be at the rate of $450 a month.” The name of J. Louis Comiskey, President-Treasurer Deceased, was on the letter. It had been J. Louis who released Gerlach and assigned him to Shreveport more than a year earlier. Grabiner advised Gerlach to sign the contract immediately because spring workouts began on March 4.

“Gerlach made so fine an impression in California that the Saints were severely apprehensive they might not get him,” wrote Gordon Gilmore of the St. Paul Pioneer Press. With future Hall of Famer Luke Appling at shortstop and Webb as a backup in Chicago, Gerlach did go back to St. Paul, giving the Saints “everything they desire in a shortstop,” wrote Gilmore. It was Gerlach’s fielding that impressed baseball scouts and writers, though he was described as “wide-shouldered and powerful-appearing.”9

Gerlach rode a train for three days and nights, first joining the Saints in Kansas City for a 7-3 victory. In a loss to the Milwaukee Brewers, he made two sensational plays, inspiring Gilmore to predict a long major league career for Gerlach, who played 99 games for the Saints, batted .247 and reduced his error total from 41 at Shreveport to 21 at St. Paul. He made “the circus play of the game” on June 5, charging back of second base and throwing out former major leaguer Jimmy Hitchcock by an eyelash, one of eight assists in a 2-0 Saints victory. 10 Yet Gerlach had berated himself for being out of position when he just missed Frenchy Bordagaray’s line drive for the only hit off Nate Andrews on May 25. “Forget it, kid,” Andrews told him. “We won didn’t we?”11Despite the Saints’ efforts to replace Gerlach with the likes of Damon Phillips and Louis Rogino to add offense and experience to the lineup, Gerlach finished the season as the regular shortstop.

At the start of 1941 spring training, St. Paul optioned Gerlach to the Atlanta Crackers of the A-1 Southern Association..Gerlach batted only .211 in 115 games -- after a one-for-30 start in which his only hit won a game -- but “he loved it there,” son John said. Gerlach achieved his best single-season fielding percentage and so impressed with his glove work that sportswriters did not know what the Crackers would do without him after his draft board in Wisconsin ordered him to take a physical examination at Fort McPherson for enlistment in the U.S. Army Air Corps. “Gerlach makes so many brilliant plays at shortstop,” wrote Jack Troy of the Atlanta Constitution, “that he enters the Cracker book as a star with 22 runs batted in.”12

Appointed corporal on Feb. 23, 1942, Gerlach earned the Distinguished Flying Cross and was discharged as squad leader in Greenville, Mississippi. On February 10, 1943, Gerlach married the former Mary Jean Hebenstreit at St. Matthew’s Church in Shullsburg. They raised seven children – Barbara, James, Ann, Martha, John, Mary Beth and Joseph – and enjoyed nine grandchildren. After World War II, Gerlach earned his law degree from the University of Wisconsin and practiced law until his death in 1999. For many years, Gerlach shared an office with attorney John Walsh, the University of Wisconsin’s longtime boxing coach, partnered briefly with Arthur G. Field, and joined his sons John and James in 1988.

During the 1940s and 1950s, Gerlach continued to play semi-professional baseball in the Madison Industrial League that featured former and current University of Wisconsin players and local talent. The league’s outstanding infielder in 1947, Gerlach was one of three Industrial all-stars to hit ground rule doubles over the ivy-covered right field fence 240 feet from home plate at Madison’s Breese Stevens Field against Hall of Fame pitcher Leroy (Satchel) Paige on July 17. Paige’s Kansas City Monarchs rallied from the 2-0 deficit to beat the “best Industrial League all-star squad ever assembled,” 14-5, before 2,903 fans.13 In 1948, Gerlach was league MVP and batting champion (.409). The powerful Badger Sports team, managed by UW head coach Arthur “Dynie” Mansfield, beat Oscar Mayer on August 31, 1948, 5-2, with 3, 452 fans on hand at Breese Stevens Field. Gerlach had three hits in the championship game and had five hits in 11 trips in three playoff games. In 1950, Gerlach led Badger Sports to the Capitol District baseball tournament championship, again over Oscar Mayer, with several current and former University of Wisconsin players on both squads.14

Gerlach was inducted into the Madison Sports Hall of Fame in 1972 and the UW Athletic Hall of Fame in 1994. He was also a member of the Sierra and Sertoma Clubs. He passed away on August 28, 1999 and is buried at St. Matthew Catholic Cemetery in Shullsburg.