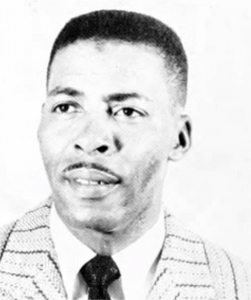 Calvin Coolidge Irvin was born on November 28, 1924, in Haleburg, Alabama, to Cupid Alexander (C.A.) and Mary Eliza Henderson Irvin, the youngest of 13 children.1 Haleburg is a small town in the southeastern part of the state, near the Georgia state line. Like many in the area, C.A. was a sharecropper. After being cheated and mistreated by the local landowner, the family relocated to New Jersey, initially to Bloomington and then to Orange. It was in Haleburg, however, that family interest in sports had its beginnings. Working only a half-day on Saturdays, Cal’s father gathered with other men and older boys to play baseball in the afternoon. It was in this setting that the family’s love of sports, and baseball specifically, was nurtured. Cal’s older brother, Monte, became a multi-sport high-school athlete and later starred in both the Negro Leagues and the major leagues. Monte, who was elected to the National Baseball Hall of Fame in 1973, served as a role model for his younger brother Cal in academics, athletics, and behavior.2

Calvin Irvin was the graduation speaker in 1942 for his senior class at Orange High in Orange, New Jersey. During his high school years, Cal had won the highest award for excellence in scholarship and athletics.

Although basketball proved to be his highlight sport, Cal Irvin played baseball in the Negro Leagues, alongside Monte, for the 1946 Negro National League and World Series champion Newark Eagles. In correspondence in 2001, Cal noted that he had played shortstop for Newark for only three-quarters of that season.3

Negro League historian Wayne Stivers has located box scores for two games in 1946, one against the Kansas City Monarchs and another against the Cleveland Buckeyes, in which Cal played shortstop for the Eagles.4 While he played for Newark’s 1946 championship team, he was teamed with four future members of the Baseball Hall of Fame: catcher and manager Biz Mackey, pitcher and outfielder Leon Day, second baseman Larry Doby, and Monte Irvin, who played shortstop as well as the outfield.5

Playing the same position as his brother and being a double-play partner with Doby proved to be exciting. When asked in 20016 who were the best players he saw in the Negro Leagues, Cal answered with an all-star lineup:

Each of these players, except Jimmy Hill, is in the Hall of Fame. Interestingly, Cal placed his brother in the outfield and not at his primary position with Newark, which was shortstop. The fact that a number of Eagles were listed was not unexpected since they were the 1946 champions.

In 1947, Irvin played for the Raleigh Grays of the Negro Southern League. He turned down a contract with the major-league New York Giants, refusing the Giants’ wish to assign him to Phoenix in the Class-C Arizona-Texas League.7

Cal would have an influence on another future Negro Leaguer and major leaguer, Joe Black. At Morgan State University in Baltimore, Irvin was a halfback and Black was a receiver on the 1942 CIAA (Colored Intercollegiate Athletic Association) championship football team. The two also played together on the Bears’ basketball team, for which Irvin was a starting forward and Black a reserve.

Morgan State had no baseball team, but Irvin and Black obtained summer jobs that year working on the campus grounds. It was Irvin who suggested the two teammates attend a NNL game between the Newark Eagles and the homestanding Baltimore Elite Giants at nearby Bugle Field. Hearing bragging about how good each (i.e., Black and Irvin) was compared with what was evident on the field, Vernon Green, Baltimore’s secretary and business manager, approached the two and offered them a tryout. Calvin Irvin declined the opportunity, not wanting to risk losing his amateur status.8

Joe Black, who was 19 years old, accepted the Elite Giants’ offer and went on to become a three-time Negro League All-Star pitcher (1947, ’48, and ’50) for Baltimore. He entered the major leagues with the Brooklyn Dodgers in 1952 and posted a 15-4 record with 15 saves for the pennant-winning Dodgers. He was named the National League’s Rookie of the Year. Pitching in Game One of the 1952 World Series at Ebbets Field in Brooklyn, Black became the first African-American pitcher to win a World Series game when he hurled nine innings in a 4-2 Dodgers victory over the New York Yankees.9

Returning to Morgan State, Irvin continued his education. He had been a three-sport high-school star athlete and valedictorian of his Orange, New Jersey, high-school class. In college he earned All-CIAA honors in basketball and football. After a leg injury ended his playing days, Irvin left Morgan State in 1945, and finished his education at the University of Illinois, where he received a bachelor’s degree.10

From Illinois, Irvin’s educational pursuits led him to Columbia University in New York and in 1948 he received a master’s degree in physical education. He then returned to Orange and obtained a job as a recreation supervisor for East Orange’s Department of Recreation.11 A friend of Irvin’s, who lived across the street from him, was on the board of Johnson C. Smith College in Charlotte, North Carolina, and he advised Irvin of an opening at the college. Irvin soon accepted a position as a teacher, basketball coach, and assistant football coach at the college. After three years, he moved to Atkins High School in Winston-Salem to teach and coach basketball. He later went to North Carolina A&T in Greensboro, where he taught and coached until his retirement.12

Irvin coached the North Carolina A&T basketball team to the 1959 NCAA College Division Final Four as the first historically black university to earn a bid to the NCAA tournament. As head coach for 18 of his 35 years at A&T, he never had a losing season, and his teams won 308 basketball games in the 18 years, including CIAA titles in 1959, 1962, 1964, and 1967.13 Irvin also became North Carolina A&T’s athletic director, and he was chair of the Health, Physical Education, and Recreation Department for seven years. The college’s basketball court was named for him.14

After retirement from A&T, Irvin worked as a scout for the National Basketball Association’s Charlotte Hornets and later as a scout evaluating college football game officials to identify potential candidates to officiate in the National Football League.

Calvin Irvin was inducted into the Newark Athletic Hall of Fame in 1995, five years after his brother Monte and one year after the Newark Eagles had received the team award.15 The recognition was based on his accomplishments at Orange High School and with the 1946 Newark Eagles.

On November 25, 2017, another Eagle flew home. Calvin Irvin died at the Morningview Assisted Living facility in Greensboro after a 16-year battle with Alzheimer’s disease.17 He was survived by his wife of 59 years, Kathryn W. Irvin.

3 Written correspondence to the author from Calvin Irvin, postmarked July 27, 2001.

6 Written correspondence to the author from Calvin Irvin, postmarked July 27, 2001.

10 Irvin with Riley, 24; and Calvin Irvin obituary, Greensboro (North Carolina) News & Record, November 30, 2017. Calvin Irvin left Morgan State College (which became a university in 1975) after injuring his knee in football. The football coach wanted him to play anyway and said he would take his scholarship away if he didn’t play. At that point, Cal left and worked his way through the University of Illinois.