This article was written by David Porter 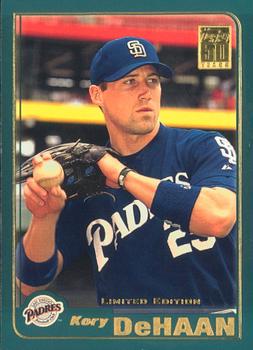 Kory DeHaan played professional baseball for seven years, including 2000 with the San Diego Padres as a Rule 5 draftee, and has coached in minor-league baseball since 2010.

Baseball was DeHaan’s favorite passion. “Every spare minute I would be there playing ball,” DeHaan recollected. “There was nothing I loved more.”2 DeHaan’s father made the biggest impact on his life. “He did anything he could to help me practice and grow, including installing a baseball cage in our backyard. He showed me the meaning of hard work and what a dad/husband does to show their love to their kids and family.”3 DeHaan rooted for the Kansas City Royals, noting “George Brett was my hero.”4 He attended Pella Christian schools and graduated in 1994 from Pella Christian High School, where he played baseball and basketball four years and participated one year each in soccer and track. In 1994, he made the All State baseball team and starred on the school’s state championship squad, coached by Todd Zylstra. DeHaan’s father coached him his sophomore and junior years.5

The 6-foot-2, 187-pound DeHaan, who batted left and threw right, attended Morningside College in Sioux City, Iowa from 1994 to 1997 and played outfield for three years. In 118 career games for the Mustangs, he batted .351 with 10 homers, 57 RBIs, 71 stolen bases, and 112 runs scored.6 He earned his Bachelor of Science degree in Business Administration through the University of Phoenix Online in 2012.7

In June 1997, the Pittsburgh Pirates drafted DeHaan in the seventh round after his junior year. Scout Grant Brittain signed him. “I was just hoping to get drafted,” DeHaan recalled, “but to go in a high round was a bonus.8” “It’s unreal that you can get paid for playing a little kids’ game.” Pittsburgh assigned him to the Erie SeaWolves (Class A New York-Penn League), for whom he batted .239 with six triples in 58 games.9

DeHaan hit .314 in 132 games in 1998 with the Augusta GreenJackets (Class A South Atlantic League), breaking Moises Alou’s franchise batting average record and making the South Atlantic League All-Star team.10 He led the circuit with a career-high 39 doubles and ranked among the top five in triples (8), on-base percentage (.404), and extra-base hits (55). Marty Brown, who piloted him at Erie, Augusta, and Altoona was his favorite manager. Brown taught him “how to physically and mentally play professional baseball” and “believed in me, which instilled personal confidence in my abilities.”11

DeHaan split the 1999 campaign between the Lynchburg Hillcats (Class A Carolina League) and the Altoona Curve (Class AA Eastern League), leading all Pirate minor leaguers in stolen bases (46) and making the Carolina League All-Star team. He batted .325 with 19 doubles and 32 stolen bases in 78 games for Lynchburg before being promoted to Altoona in July. Gary Crockett of the Lynchburg News and Advance lauded DeHaan’s defensive play: “It’s the kind of glove work that would have made DeHaan, if he were a major leaguer, a regular on Sports Center.”12

In October 1999, DeHaan became eligible for the Rule 5 draft because Pittsburgh did not put him on its 40-man roster. San Diego Padres player personnel head Ted Simmons called DeHaan “the most athletic young center fielder that I had seen” and persuaded general manager Kevin Towers to draft him. Rule 5 rules required DeHaan to remain with the Padres for the entire 2000 season. “I was a little down when Pittsburgh did not protect me,”13 he admitted. But the strongly religious DeHaan reflected, “God continues to floor me with his blessings.”14

The 23-year-old DeHaan had accomplished his major-league dream quicker than expected. The Padres utilized DeHaan in 2000 as a spot starter, pinch-hitter, pinch-runner, and late-inning defensive replacement. DeHaan batted just .204 with 21 hits, seven doubles, two homers, and 13 RBIs in 90 games.15 He opened the season on the disabled list with a left knee contusion sustained during spring training. On April 25, DeHaan struck out as a pinch-hitter in his major-league debut, against the Pittsburgh Pirates at Three Rivers Stadium. He started in right field two days later, doubling in the third inning off Brad Clontz for his first major-league hit and singling in two runs in the ninth inning off Jose Silva in the 12-4 Padres victory. On May 30, DeHaan doubled twice with two RBIs in a 6-3 home win over the Milwaukee Brewers at Qualcomm Stadium.16

DeHaan’s most memorable major-league highlight was his first home run, which came off Darren Dreifort of the Los Angeles Dodgers in the fourth inning on July 5 at the Q. DeHaan recollected, “Before I came to bat, someone on the bench called I was going to hit a home run. Padre third baseman Phil Nevin yelled, ‘If Kory hits a home run, I’ll shave my head.’ Next pitch I drove a ball to left field that just cleared the home run line. The whole bench went crazy because everyone (had) heard Phil make the comment.”17 The three-game Los Angeles series featured DeHaan getting five hits and scoring four runs. During the next series at the Texas Rangers, a Padre teammate shaved Nevin’s head.18 As a pinch hitter, DeHaan clouted a three-run double in a 16-1 rout over the New York Mets on August 22 at the Q and a two-run homer off Kyle Farnsworth of the Chicago Cubs in an 11-5 triumph on August 31 at Wrigley Field.19 “The whole season was just awesome,” he reflected. “To be on the field with major league players and learn from them was a fantastic experience.”20

DeHaan split 2001 between the Portland Beavers (Pacific Coast League) and Mobile Bay Bears (Southern League). He struggled with Portland, admitting, “I was too aggressive and chasing bad pitches.”21 A torrid fall followed at Peoria (Arizona Fall League), as DeHaan batted .331 and led the circuit with 29 doubles and 39 RBIs in just 29 games.22 In 2002, he hit .283 for Portland with 31 doubles, a career-high 14 triples, and 23 stolen bases and appeared in seven games with the Padres. Performance frustration and nagging injuries ended DeHaan’s playing career in 2003 at Portland.

During seven minor-league seasons, DeHaan batted .280 with 139 doubles, 35 home runs, 264 RBIs, and 151 stolen bases in 632 games. He enjoyed “the camaraderie” with teammates spending life together “in all areas of the country” and considered it “fun connecting and learning about life away from my small sheltered town of Pella.” But he realized, “It’s not an easy way to live your life, (with) hardly any salary, not much family, (and a) game every night.”23

“Many of my friends and family including myself,” he explained, “had high hopes of spending a long career in the major leagues. At times, I felt like I let them down. But now I know the game is really hard and not many even make it to the big leagues. So I’m very fortunate and happy to have accomplished what I did.” He acknowledged, “many coaches working tirelessly every day to help me grow and improve,” especially Pirates hitting coordinator Pat Rossler.24

DeHaan gave baseball lessons from 2004 to 2006, worked at Indwell Woods cabinet company in 2004 and 2005, and co-owned All Star Landscaping and Pools LLC in Gilbert, Arizona from 2006 through 2008.25 In 2009 he served as hitting coach for the Chico Outlaws (Independent Golden Baseball League) and replaced Greg Cadaret as interim manager on July 24, guiding his club to an 11-19 win-loss record. DeHaan rejoined the San Diego Padres organization as a hitting coach with the AZL Padres (Rookie Arizona League) in 201026 and Fort Wayne TinCaps (Class A Midwest League) in 2011. He has been a hitting coach in the Pittsburgh Pirates minor-league system with the Bradenton Marauders (Class A Florida State League) in 2012 and 2014, Jamestown Jammers (Class A New York-Penn League) in 2013, and GCL Pirates (Rookie-level Gulf Coast League) in 2015 and ongoing since 2018.27 DeHaan managed the Bristol Pirates (Rookie-level Appalachian League) to 25 wins and 43 losses in 2016 and was outfield coordinator for the Pirates minor-league organization in 2017. Pittsburgh named the patient, understanding, caring DeHaan its 2016 Organizational Coach of the Year. DeHaan reflected his most memorable experience as a manager or coach has been “seeing the players you have had go on to make a big difference in the big leagues” and others “start a family, start teaching, (and) being well-equipped members of society. That is what is so fun and life-giving for me to see.”28

DeHaan married Rachel Lee Schepel, a 1996 graduate of Calvin College, on December 29, 2001, at Faith Christian Reformed Church in Pella. Her father pastored that church, and the Schepels resided across the street from the DeHaans.29 The DeHaans, who resided in and around Phoenix, Arizona from 2001 until 2012, now live in Bradenton, Florida and have three daughters named Kendy, Reese, and Delaney.30 Rachel speaks Spanish and served as a teacher-missionary in Honduras for two years.31 She has taught second grade at Bradenton Christian School since 2012.32

Since others had shown faithful dedication to help improve his baseball talents, DeHaan in February 2013 established DeHaan Baseball, giving Bradenton youngsters baseball instruction and occasionally providing training camps.33 “Through hard work, resiliency, and a willingness to be uncommon, I was fortunate to be given the opportunity to play in the major leagues,” DeHaan explained. “Now as a professional baseball coach, I am able to serve and teach aspiring big league players what it will take to play at the highest level.” 34

This biography was reviewed by Bill Nowlin and Joel Barnhart and fact-checked by Kevin Larkin.

In addition to the sources cited in the Notes, the author also consulted Baseball-Reference.com and some additional Oskaloosa Herald articles.