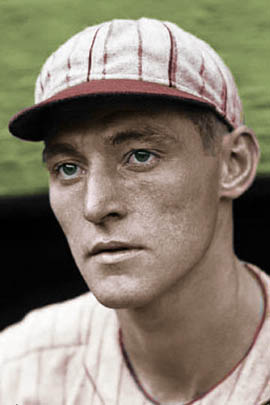 “Ripley’s Believe It or Not” featured Charley Gelbert in 1941, noting that he “played 239 major league games with a broken leg.” Shortstop Gelbert put in four full seasons with the St. Louis Cardinals and played in back-to-back World Series, losing one and then winning one. And then an offseason hunting accident nearly ended his career. But he kept on playing, and saw duty in five more big-league seasons.

He had seemed destined for greatness. Hall of Famer and teammate Frankie Frisch said, “If he hadn’t been hurt, he would have been the best.”1

Gelbert’s father, Charles S. Gelbert, was a major football star in college; the New York Telegram wrote in 1928, “Anybody who knows anything about the old days in football remembers Gelbert, of Penn – All-American end for three years in a row.”2 Charles S., born to German immigrant parents, graduated from Penn and then became a veterinary surgeon. It is believed that he is the Gelbert who played professional baseball very briefly (12 games) with the Harrisburg/Scranton Indians of the Pennsylvania State League in 1892.

Dr. Gelbert and his wife, Mida (Kelley) Gelbert, had three children – Mida, Magnus, and James. Magnus became baseball player Charley Gelbert. “Until I was eight years old,” Charley once said, “my name was Magnus Ott, but I didn’t like it. The boys hung all sorts of nicknames on me. Maggie, of course, was one of them, so I had the name changed and took Charles. Magnus and Ott were the family names of my father’s grandparents in Germany.”3

Magnus (Charles) was born on January 26, 1906, in Scranton. The family moved from Scranton to Pittsburgh to Altoona to Ambler, where they settled in. Gelbert told about his early years: “In Ambler, I played baseball on the Boy Scout Troop No. 1 team, winning several games. I finished grammar school and entered high, made the team and pitched and played shortstop and second base. I played high school football for two years, and, as a halfback, made a reputation which resulted in offers to work my way through the University of Pennsylvania. …”4

He studied business administration but lost sleep and weight with the commute from home, waiting on tables, and playing football, on top of his studies. He broke both collarbones at football, and then flunked out. He worked as a trainman for the Reading Railroad from March to September 1924, while playing on the railroad baseball team. That fall he took up a free-ride offer to attend Lebanon Valley College in Annville, Pennsylvania, and studied there for four years. He became captain of the baseball team and an All-American, remarkable for someone from such a small college.

Gelbert lettered in football, basketball, and baseball, a total of 11 letters in all. He was signed to a contract with the St. Louis Cardinals by Charles “Pop” Kelchner in 1927, to report in 1928. “That summer, on my own, I played for a team in Topeka, Kan., club of the Western Association, just for the experience,” The Sporting News quoted him as saying. “In 1928 I left school to go to the training camp with the Cardinals.”5 (He’d also played one game for Syracuse in 1926 under the name Raymond Charles, tripling and then striking out three times.)

With Topeka in 1927, Gelbert hit .286 in 46 games. The Cardinals placed him with Rochester in 1928 and Branch Rickey himself apparently wrote to Warren Giles, the head of the Rochester Red Wings, “I am sending you a shortstop. If he strikes out every time and boots every ball, I want him to play the first 30 games. He will be the Cardinal shortstop next season.”6 Gelbert came through; he hit .340 with 21 homers, 14 triples, and 32 doubles, and he successfully fielded 93.6 percent of his chances. He also got into five games for Syracuse. In the winter he worked helping coach football at Lebanon Valley College.

Rickey was right; Gelbert was the shortstop for the Cardinals in 1929. The team was so sure of Gelbert that they sold the contract of future Hall of Famer Rabbit Maranville to the Boston Braves in December 1928.

Gelbert played almost every game of the 1929 season (146 of 154), hit .262, and drove in 65 runs, but he was a little porous at shortstop, leading the league in errors at the position. The team finished fourth.

Under manager Gabby Street, the 1930 Cardinals again won the National League pennant (as they had in 1926 and 1928) with a .314 team batting mark; Gelbert hit .304 and drove in 72 runs in 139 games. He had an excellent World Series; though the Cards lost to the Philadelphia Athletics in six games, Gelbert hit .353, and won praise for some outstanding fielding plays.

During the World Series, Gelbert drove in key insurance runs in Games Three and Four, but he shone in the field as well. Tom Meany’s mid-Series column in the New York Telegram was titled “Gelbert Voted Series Hero by Both Cardinals and A’s.”7 Grantland Rice wrote, “The star of the Cardinal front line was young Charley Gelbert at short.”8 He handled 28 chances without an error.

After the Series, Gelbert married Mabel “Jerry” Hafer, a college classmate. They had three children, Jerriann, Daniel, and Patricia.

In 1931 Gelbert hit .289 in the regular season, playing in eight fewer games due to an injury that forced him to cut back some on his playing time. The Cardinals won the pennant once more and faced off against the Athletics again, this time winning the World Series in seven games. Gelbert collected six more hits and handled 42 more chances without an error.

Gelbert held out for a better contract in 1932 until March 20. He played most of the season, missing only two of his team’s first 124 games, batting .268. His last game was on August 24, however. He suffered an injury “to a muscle that supports the abdominal wall” that cost him the rest of the season.9

That November, Gelbert shot himself with a 12-gauge shotgun. It was an accident. On November 16 he went hunting with four friends and a number of dogs not far from his home in Fayettesville, Pennsylvania. “It could have happened to anyone,” he said afterward. “I was talking along, carrying my gun properly, and my foot slipped. I fell backward, my feet flew up, the gun went off. …”10 His foot had snagged on a hillside vine and as he tried to right himself, the other foot turned on a piece of rock. “The gun in his right hand crashed against the rocky mountain side. There was an explosion. The jar had discharged Gelbert’s gun.”11 The shotgun blast hit him in the left leg about four inches above the ankle. “They were afraid to loosen the boot for fear the foot would fall off. That’s how bad it looked.”12 An Army surgeon who had served in World War I evaluated his foot and worried that it would need to be amputated; there were few tendons left. But treatment at Hahnemann Hospital in Philadelphia saved his foot. Gelbert told his wife, “From now on, I’ll confine myself to golf. … I know now there is nothing safe about a gun.”13

Surgeries followed, and Gelbert spent two months in the hospital. He then began a long stretch of rehabilitation. His fibula was entirely disconnected and four inches of his posterior artery and nerve were destroyed. He missed both the 1933 and 1934 seasons, needing even further skin grafts late in calendar 1934. He took a position as football coach at Gettysburg College but had to resign that position in September 1934 because he still was not able to physically do the work of coaching on the field. When the Gas House Gang Cardinals won the World Series in October, they remembered their former shortstop and voted him a $1,000 partial share.

Gelbert returned to play baseball for the Cardinals in 1935, appearing in one April game, two in May, and then playing more regularly, with a few gaps here and there, winding up the season playing third base more than shortstop. He appeared in 62 games hitting .292, and his fielding percentage indicated that his defensive play was more or less as good as it had been.

In January 1936 Charley’s father committed suicide in a Philadelphia hospital. He was suffering a lengthy 18 months of debilitation and finally decided to end his life.14

Gelbert upped his playing time to 93 games in 1936, but hit for his lowest average yet, .229. That December, St. Louis sold his contract and that of catcher Spud Davis to the Cincinnati Reds.

Things didn’t work out. Gelbert had a serious charley horse early in the year and his batting hovered around .200 most of the time once the season got started; he was hitting .193 when he was placed on waivers and claimed, on July 9, by the Detroit Tigers at the minimum waiver price. They planned to use him as a utility infielder. In 20 game appearances for the Tigers, Gelbert managed only four base hits. He finished the season at a combined .161. On December 4 the Tigers released him to Toledo.

Gelbert played in 143 games for the Toledo Mud Hens in 1938, batting .284. During the October 1938 major-league draft meeting, the Washington Senators selected Gelbert. He played in about half the Senators’ games (68) in 1939, and assembled 222 plate appearances, compiling a batting average of .255 (with a .361 on-base percentage).

In May 1939 the commissioner’s office began investigating the Tigers. Because their release of Gelbert, a 10-year player, to Toledo could only have occurred with his permission, it was thought he had been promised the position of manager of the Mud Hens, but then found it was not given him. When the Senators acquired Gelbert via the draft, he lost the opportunity for something like a $5,000 free-agent signing bonus.

The 1940 season was Gelbert’s last in the major leagues, split between the Senators (for whom he even pitched in two games (four innings in relief), with a 9.00 ERA) and the Boston Red Sox. He was actually batting .370 for Washington (albeit in only 59 plate appearances over 22 games), when the team placed him on waivers to give prospect Jimmy Pofahl more playing time. The Red Sox claimed Gelbert on August 18. For Boston, he hit .198 in 30 games.

In 1941 Gelbert played for Boston’s farm club in Louisville, though only part-time (batting .270 in 40 games), and in 1942 the Brooklyn Dodgers purchased his rights, assigning him to their farm club in Montreal (.217 in 66 games). When he learned he was being sent to the minors, he decided to offer his services to the United States Navy, and near the end of August the Navy called upon him to serve in the war effort. He was assigned to the Norman (Oklahoma) Naval Station, where Lt. Cmdr. Gelbert managed the baseball team.

Near the end of the war, Gelbert served a period of time in the Pacific. After he was discharged from the Navy in November 1945, Gelbert became baseball coach (and assistant football and basketball coach) for Lafayette College. In 21 seasons the Lafayette baseball team won over 300 games (307-176), no mean accomplishment given the shorter college baseball schedules of those days.

During the summers from 1952 through 1959, Gelbert scouted for the Dodgers.

In December 1966, he was named to the Pennsylvania Sports Hall of Fame.

Gelbert died at Scranton of a massive myocardial infarction on January 13, 1967, just 13 days before he would have turned 61.