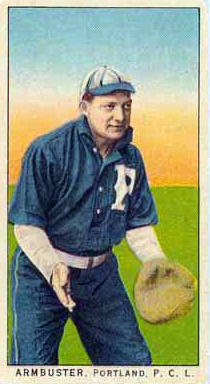 That sounds worse than it probably was. The years he played were 1905 to 1907 and catchers weren’t typically expected to provide significantly more offense than pitchers in that era. He was always the reserve catcher, never the main man – though in 1906, he did play in 72 games. It would still be hard to say he had a stellar career.

Charles Anthony Armbruster was his name, and he was relatively short and stout – 5-foot-9 and 180 pounds. He was born in Cincinnati, Ohio, on August 30, 1880, a birthday he shared with Ted Williams. A writer from his home city of Cincinnati called him a “Porkopolitan backstop.”i He was a machinist by trade, and played semipro ball on the side around Cincinnati. In 1900, he played for the Newburgh team, and in 1901, he joined the Poughkeepsie team in the Hudson River League as a catcher, there attracting the attention of future Hall of Famer Big Dan Brouthers; in turn, Brouthers recommended him to Ned Hanlon, who signed him to the Brooklyn ballclub.ii But Brooklyn had Duke Farrell and Lew Ritter to handle the catching and didn’t need Armbruster, so he was “fired” by Brooklyn and Hanlon let him go to New London.iii His professional baseball career truly began with four seasons in the Connecticut State League, all with the New London team, from 1902 through 1905.iv

On June 27, he earned some attention (and a five-dollar fine levied by umpire Shannon) when he was so angered by a strike call that he fired his cap onto the ground. He played in 80 games and hit for a .211 batting average. Charlie’s first cousin, Harry Gregory “Army” Armbruster, was playing as an outfielder for Providence at the time, starting his own career in 1903.v Army later played 91 games for the 1906 Philadelphia Athletics.

In his second year, Charlie had his best success in baseball, appearing in 91 games and batting an even .300. His 1904 season saw him hit .247, but also achieve a small bit of attention: “Armbruster, the New London catcher, and Wee Willie McGill, of the Norwich team, are reported as haying recently gone slumming and got lost.”vi One wonders about the story behind that note.

He started 1905 nicely, and was hitting .284 when the Boston Americans had a sudden need and reached out to acquire him. “The illness of [Art] McGovern in the West forced the team to go after a man and Charles Armbruster, who has been doing the backstopping for the New London team, has been secured at an announced figure of $1750. Charley Farrell went down to see this player work and reported favorably, but New London would not sell for $1000. Not bad business to get $1750 for a player at this stage of the season. Good catchers are very scarce,” concluded Boston Herald sportswriter Jacob Morse.vii He had the nickname “Buster” at the time.viii

He made a good initial impression with manager Jimmy Collins, batting .333 after his first seven games, but then suffered a split finger. He endured despite decline as the season wore on. The Washington Post unkindly commented that “the general opinion around the American League circuit is that Catcher Armbruster is long on name and short on ability.”ix Three weeks later the Post said that he’d probably not be brought back because of his poor throwing arm, though he threw out 20 of 47 baserunners who tried to steal on him.

He was kept to the end of the season, appearing in 35 games with just six credited runs batted in. He hit .198 and scored 13 runs. As a batter, he did show an understanding of the strike zone – and some patience – and drew 18 bases on balls, improving his on-base percentage to .336, but all in all, Jacob Morse of the Boston Herald wrote, “The Boston papers are sure that Armbruster will not remain with the Collins band another year. His work is characterized as something wretched. Most men who have followed Connecticut League ball have wondered that he has been kept so long.”x

There was “something wretched” for sure about Boston’s 1906 season. The team won 49 games and lost 105. They finished last – in eighth place – 45 ½ games out of first place, and a full eight games behind the seventh-place Washington Senators. One of Armbruster’s battery mates, pitcher Joe Harris, had a 2-21 record. Even Cy Young lost 21 games, winning just 13. With Lou Criger out for most of the season, Armbruster caught 66 games, not even half the games but more than any other catcher. He would have played more but for a broken finger in August. He’d hit .198 in 1905 but this year hit only .144. In terms of runs produced, he didn’t reach double digits in either runs scored (nine) or runs batted in (six).

He did throw out 43 percent of the runners who tried to steal on him in each of his first two seasons. To repeat a point, catching was one thing and offense another. It was deemed sufficient to be good on defense. At midseason, Sporting Life noted the separation between the two and indicated how Armbruster could be seen as good in one area, but not in another. Hitting would almost have been a bonus. “Charlie Armbruster is catching better ball for Boston now than at any time since he joined the club. He has been hitting some of late, too.”xi

Armbruster’s weak showing did provide an opportunity for first-year catcher Bill Carrigan to begin to make his mark; nearly a decade later, Carrigan led the Red Sox to back-to-back world championships in 1915 and 1916.

After this most disastrous season, the Herald’s Jake Morse nonetheless saw Armbruster as part of Boston’s plans for 1907: “The catching department looks mighty good with Lou Criger giving every indication he will be in his old-time condition, Al Shaw, of Louisville, Armbruster, and Carrigan. There is a mighty good quartet.”xii

“Armbruster Located in Wilds of Ohio” – the Boston Globe subhead let readers know that he would indeed be back. It was said that “after a long search” he had been found at Stockton, Ohio. He’d spent much of the winter in the Adirondacks with teammate Myron Grimshaw and was said to be “grossly overweight,” so owner John I. Taylor wanted him to get an early start to spring training at Hot Springs.xiii He arrived several days before most of the others, and was reported to be “fit as the proverbial fiddle” and awaiting them.xiv

Armbruster was back, and so were Criger and Shaw. Carrigan spent the year in the minors with Toronto.

In the springtime of 1907, there were a series of games scheduled between the Boston Americans and the Cincinnati Reds, to be held in Cincinnati. The weather was exceptionally cold, but 9,000 turned out to see the game on March 31, even though some of Boston’s players – Dinneen, Criger, and Freeman – were away in Fort Wayne for the funeral of manager Chick Stahl, who had taken his own life on March 28. A week before the suicide, Armbruster had written a letter to friends in Cincinnati saying that Stahl was “much worried over the affairs of the team” and Armbruster reported that he’d said “he would do the Dutch act (take his own life) if he did not get some of the worry off his mind.”xv

Cincinnati being Armbruster’s home town, he was “presented with a huge bouquet and a diamond studded Eagles’ charm when he came to bat in the third inning.”xvi Boston won, 3-0, and then split the next two games.

Manager Deacon McGuire indefinitely suspended Armbruster on August 15 for reasons we cannot determine today; Jake Morse asserted, “this is the first thing of that kind that has occurred in the Boston Club for a very long time.”xvii It was expected that Boston would begin exploring options for trading or farming him out, because “McGuire is a stickler for discipline.”xviii But then Criger became ill and the suspension was lifted. On September 1, the Chicago White Sox purchased Armbruster’s contract from Boston.

For Boston, he had appeared in 23 games, but in 60 at-bats only had five singles and a double to show for it – batting .100. He’d not driven in even one run and had only scored two. For Chicago, he only appeared in one game, on September 11, and was 0-for-3 with a walk.

Armbruster wintered in Cold Springs, New York, and had hoped to train in Hot Springs, Arkansas, but the White Sox launched a cross-country trip to train in California. Armbruster made the White Sox roster out of spring training in 1908, but never saw action, and on June 1 he was sent to Grand Rapids. Writer W.A. Phelon’s summation of the catcher’s career was that he “gave considerable promise when Boston got him some few years ago, but has failed with the bat, though a pretty fair receiver.”xix

In July, President Comiskey notified Armbruster that he needed to repay $300 he owed Chicago. Armbruster agreed he owed the club something, but a lesser amount, which he would pay as soon as he could.xx He only appeared in four games for Grand Rapids, collecting one hit in ten at-bats, finishing the season in Holyoke, Massachusetts (back in the Connecticut State League), appearing in 24 games and hitting .262.

In 1909, he traveled to the West Coast, playing the next two years – his last in baseball – for Portland. He signed up with Walter McCredie’s Pacific Coast League Portland Beavers and was playing with them as early as March. In fact, he played for two Portland ball teams, according to SABR’s Rocky Bauer. In addition to the Beavers, Armbruster also played 41 games for the Portland Colts of the Northwestern League. He hit .248 for the Colts. He began the season with the Beavers, and appeared in 78 games, batting .203 for them. “The two teams,” explained Bauer, “were owned by the McCredies and the Colts acted as farm team, so several players went up and down.”xxi

Armbruster apparently struggled with alcohol. In 1910, when it was announced on May 10 that he’d been released (he had only appeared in eight games, and was 2-for-11), a dispatch from Portland to the Los Angeles Times said, “The release of Armbruster is being severely censured by the fans. Armbruster last year could not leave booze alone but McCredie told him he would give him another chance this season if Armbruster would behave himself. The catcher has kept his promise faithfully, and the fans believe he should not have been turned loose now, especially after McCredie had let him pass up an offer to play with Oakland.”xxii

Unfair as it may have been, his time with Portland was over, and he is not known to have played baseball again.

Armbruster died at age 84 at Josephine General Hospital in Grants Pass, Oregon on October 7, 1964, a few days after suffering a gunshot wound “apparently inflicted when his .22-caliber rifle went off accidentally while he was cleaning it.”xxiii He left his wife Estelle, who was a patient at the AdeRun Nursing Home, and nephew Leonard Emery of Medford, Oregon. His last occupation, as indicated on his death certificate, was as a commercial fisherman. The specific cause of death was massive peritonitis caused by the gunshot wound to his upper left abdomen which had penetrated his diaphragm, a part of his left lung, and other organs.

In addition to the sources noted in this biography, the author also accessed Armbruster’s player file from the National Baseball Hall of Fame, the Encyclopedia of Minor League Baseball, Retrosheet.org, and Baseball-Reference.com. Thanks to Rocky Bauer for helping the author better understand Armbruster’s 1909 season.

v That the two were first cousins was reported in the June 20, 1906 Sporting Life. His play for Newburgh was mentioned in the July 13, 1905 Boston Globe. One report said Charlie had also caught for the West Point T. A. C. baseball the year before his start with New London.

vii As reported in Sporting Life, July 22, 1905. The $1,750 was also reported in the Hartford Courant and other newspapers.

viii Boston Globe, July 13, 1905. “Buster In Fast Company” was the headline of a Hartford Courant account of his first game (0-for-4) five days later.