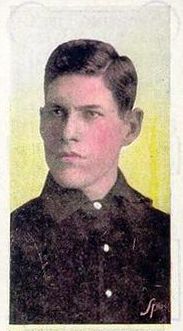 The son of a stone cutter from Ireland, Charley Smith pitched ten years in the major league, enjoying his best year mid-career with the Boston Red Sox. He was born in Cleveland on April 20, 1880 and was signed off the sandlots, playing for the Cleveland Wheel Club.i He first played pro ball in 1902 for the hometown American League Cleveland Bronchos.

Smith’s first game was on August 6, 1902. It was a memorable debut, working for manager Bill Armour. Described in the press as “a local amateur,” Smith out-pitched future Hall of Famer Rube Waddell, allowing nine hits and four runs and saw his teammates Harry Bay and Nap Lajoie break the 4-4 tie which had held since the sixth with back-to-back hits in the bottom of the ninth to win the game, 5-4.ii Three days later, the “local amateur” (this time the characterization was used by the Washington Post) shut out the visiting Baltimore Orioles, 7-0, on eight hits. On the 13th, he had a rough outing, losing 14-4 in Baltimore. The Chicago Tribune was also uninformative about his background, simply calling him “the youngster who won his two previous games.” Smith only lasted two innings and gave up five runs. Those were his only three games in 1902. The next three seasons he spent pitching minor-league ball in the Southern League.

Charles Edwin Smith had already lost his father by this time, his mother Mary listed as head of the family in Cleveland. She’d come to the United States in 1859 from Canada, her father an Irish immigrant. Charles was her third son. George had left home by 1880, James worked as a clerk in a law office, and Charles was a student. Francis, three years younger than Charles, worked as a clerk in a wire works. Frederick was seven years younger than Charles; he was – at the time of the 1910 census – a ballplayer, too. This was not the Fred Smith who played for one year in the majors with the 1890 Toledo Maumees; he was instead the shortstop Fred Smith who played for Brockton in 1910-12, then Rochester, Montreal, and Springfield, ending his career in 1916 without having made the majors. Second-born in the family was a daughter, Tirzah, who worked as a clerk in a telephone office around 1900

Charley pitched in 17 games for New Orleans in 1903, with a 6-6 record, but his season was curtailed because of ill health. He was released by New Orleans on or around July 30, and apparently had an offer from Atlanta, but his poor health prevented him from accepting it.iii

He spent the next two years with the Atlanta Crackers, with a superb 31-10 record in 1904 which unsurprisingly saw him lead the league in wins and winning percentage, however, the Crackers placed second in the league, three games behind the Memphis Egyptians. His most notable game was probably the July 20 game he pitched against New Orleans, a 1-0 win in 15 innings, allowing just three hits.iv

Smith impressed in spring training and got off to a good enough start. Sporting Life commented, “He has a world of speed, excellent control, god (sic) curves and a profound indifference to the efforts of his opponents. He held the visitors to five hits, which were all made in two innings. Evidently he will do, and is a valuable find.”v By June 23, sportswriter Paul Eaton said Smith “seems to get better every game.” He hurt his hand near the end of the season and lost a couple of weeks in September. The Senators were a seventh-place club in 1906 at 55-95, finishing 37 ½ games out of first and spared from the cellar only by the horrific 49-105 season of the Boston Americans. Smith’s record was 9-16, but his 2.91 earned run average was better than the team ERA of 3.25 and he was brought back for 1907.

He won ten games in 1907, though he lost 20, despite an improved ERA of 2.61. This was for a last-place team which won 49 and lost 102, almost the same winning percentage as in 1906. Smith struck out a career-high 119, walking 75. And he had some tough luck, wrote the Washington Post: “On just one occasion this season has he had an easy game…in all his other games this season, he has had tight games to contend with, and has unquestionably lost more games by one run than any other pitcher in the league.”vi He had, the Post wrote a week later, “a chin that indicates determination.”

He brought his ERA down again in 1908, to 2.41. His record was 9-13, though he missed several weeks during the season with a lame arm. The Senators placed seventh. The hard luck theme hadn’t gone away. The May 13, 1908 Post went into even more detail, this time adding, “If there is anything in physiognomy, his jaw would indicate that he has the nerve to face a lion.” Smith was 6-foot-1 and weighed 185 pounds, and the “tall twirler” did win a few close ones, beating Cleveland in front of his hometown folks, 2-1, with a six-hitter on August 7.

In 1909, Washington dropped back to last place again. The team won 42 games and lost 110, the .276 winning percentage still the worst in franchise history. Even before the season began, the word was let out that he’d be traded for the right offer. Smith didn’t help the team that much; he had a recurrence of the arm problem from which he’d suffered in 1908; his record was 3-12 and he’d pitched to a 3.27 ERA.vii He escaped before the season was over, however, traded to the Boston Red Sox for Doc Gessler and $2,500 in cash on September 9. The Red Sox needed more pitching; Washington needed more hitting. Despite what looked like a sorry record, Washington manager Joe Cantillon said, “I am sorry to lose Charley Smith, for everybody knows I think he is one of the best pitchers in the American League. He has been with me three years and during that time he has always twirled great ball.”viii Smith was re-energized, perhaps: he started three games for Boston and won all three. The first was a 4-2 win against Washington on the 13th.

Smith pitched all of two innings for the 1911 Red Sox (two hits, two earned runs) before having his contract purchased by Newark in the Eastern League on May 8.ix On August 17, the Chicago Cubs bought his rights from Newark and he was 3-2 with a 1.42 ERA in seven appearances in what remained of the year.

Smith pitched in the Pacific Coast League for Harry Wolverton’s San Francisco Seals and had a good year, 17-8 with a 3.09 ERA. He signed in March 1916 with Chattanooga, but doesn’t seem to have appeared in a game for them. It was his known time in the game.

He seems to have gone into working with horses. When he registered for the draft in 1918, he was working at a boarding stable in Cleveland. At the time of the 1920 census, he was married and living in Cleveland with his wife Alice Hueffed; he was the proprietor of a livery stable. Pneumonia did him in, and he died in the greater Cleveland area (Wickliffe, Ohio), on January 3, 1929. Perhaps oddly, his profession was listed on his death certificate as a pitcher for the Chicago National League ballclub. Tragically, one hour after the funeral service for her husband Charley, Alice lost her mother – also to pneumonia – while Alice was still at the burial.xi

In addition to the sources noted in this biography, the author also accessed Smith’s player file from the National Baseball Hall of Fame, the Encyclopedia of Minor League Baseball, Retrosheet.org, and Baseball-Reference.com. Thanks to Rod Nelson.

vii The June 17 Washington Post commented on his arm woes, saying he was in no condition to do justice either for himself or the team. It was said he lost most of his games because he weakened in the pinches. See the June 2, 1909 Post.