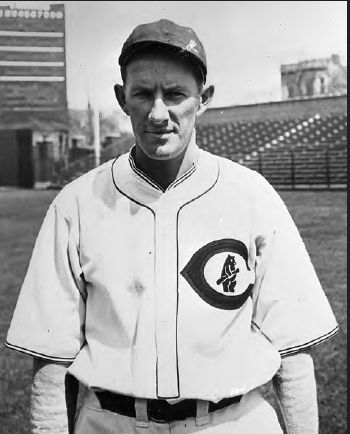 Claude Jonnard, the lesser-known half of the Jonnard brothers battery, was a prominent right-handed relief pitcher in the 1920s, leading the National League in saves with the New York Giants in 1922 and 1923, and in pitching appearances with 45 in 1923.  By the end of the decade his skills had diminished, but he still appeared in 12 games for the 1929 Cubs during their National League pennant chase.  Between April 28 and July 26 of that year, he pitched just over 27 innings for Chicago, but a series of poor performances in July led to his release well before the World Series against the Philadelphia Athletics.  Jonnard was done with the major leagues at the age of 31, only six years after his solid showing in two games during the Giants’ 1923 World Series against the Yankees.

Claude Alfred Jonnard was born on November 23, 1897, in Nashville, Tennessee, an hour before his twin brother (future catcher and scout Clarence Jonnard), to Joseph Thomas Jonnard, a railroad foreman, and his wife, Maud (May).  Claude was soon nicknamed Big Bubber in contrast with Clarence’s sobriquet of Little Bub.  The term reportedly derived from “brother.” “Bubber” stuck to Clarence once he reached the major leagues; it was his nickname throughout his subsequent playing and coaching career. Claude, though, generally was called by his name. The siblings, a rare pitcher-catcher battery comprising identical twins, each developed and displayed their baseball skills at Hume-Fogg High School in Nashville until 1916.1

That Claude completed a major-league career in which he tallied 14 wins against 12 losses, with a career earned-run average of 3.79, for three pennant-winning teams was even more impressive because he was blind in his right eye. There is no remaining documentation of when or how he lost the use of the eye, whether it was from birth or occurred later, but the disability makes his performance all the more remarkable.

As a 19-year-old, Claude signed with the hometown Nashville Volunteers of the Class A Southern Association in 1917.  Nashville dispatched him to the Talladega Tigers of the Class D Georgia-Alabama League, but he was back with Nashville the next season, winning 16 games and losing 25 in 46 appearances over the 1918 and 1919 seasons.  His ERA in 1919 was an impressive 2.33.

Based on his work with the Volunteers, the Detroit Tigers purchased the pitcher’s contract in the middle of the 1920 season and moved him to the Little Rock Travelers in the same league.  In 1920 and 1921 Jonnard played for the combative manager Kid Elberfeld alongside three other future major-league pitchers, Tom Knowlson, Chief Yellow Horse, and Hank Robinson, as well as future major-league regulars Bing Miller and Travis Jackson. The talent and the attitude on the team presented a stark contrast to his Nashville time, and his two seasons in Arkansas led the New York Giants to acquire him for a late-season cup of coffee in 1921.

Jonnard made his major-league debut on October 1 in Philadelphia.  He pitched four innings in relief of Red Causey and struck out seven of the 15 batters he faced while earning the save in the Giants’ 3-0 victory. (The save is retrospective; official statistics on saves were not kept until 1969.) He remained with the Giants for the next three seasons. During those years he posted a 13-9 record in 112 games and leading the National League in appearances (45) in 1923 and saves (five each season) in both 1922 and 1923.  Those were Jonnard’s best years, and included two World Series pitching appearances in 1923 and one in 1924.

Jonnard’s first World Series appearance, in 1923, came in the top of the eighth inning of Game Four, in relief of Hugh McQuillan with the Giants trailing the Yankees, 8-0.  He got Joe Dugan to ground out to third, then gave up a line-drive double to Babe Ruth.  After Bob Meusel fouled out, Jonnard walked Wally Pipp but got second baseman Aaron Ward to ground into a fielder’s choice.  The Yankees won, 8-4.  He pitched again the next day, in the bottom of the eighth inning, with the Yankees up 8-1.  This time he survived Ruth’s deep fly to center field, induced Meusel into a weak grounder back to the pitcher and struck out Pipp.

Jonnard’s only other postseason appearance was in Game Three of the 1924 World Series, against the Washington Senators.  This time, with New York ahead 6-3, Jonnard entered the game in the ninth inning after Rosy Ryan had loaded the bases with one out.  With Bucky Harris on third, Goose Goslin on second, and Joe Judge on first, Jonnard walked Ossie Bluege to make the score 6-4.  Manager John McGraw replaced Jonnard with Mule Watson, who recorded the last two outs to preserve the win.

Jonnard had developed a sore arm during the 1924 season.2  After the season he informed the Giants that his arm felt fine, but New York still opted to release him. That year he married a 26-year-old Canadian émigrée named Marie. They later divorced, without children, and there is little detail available about her life. Jonnard signed with Toledo of the American Association,3 and his sore arm was presumably cured, because he went 22-19 in 333 innings for the Mud Hens. That performance stimulated rumors that the Giants might re-sign Jonnard, but he instead chose to sign a $5,000 contract with the St. Louis Browns. After two losses and one save in 12 games in 1926, the Browns released him.  He landed back in the American Association, this time with the Milwaukee Brewers, and won 42 games for the club over the 1927 and 1928 seasons.

The net result was that Jonnard was given one more shot at the majors, this time with the 1929 Chicago Cubs. Making his first appearance for the team on April 28 at Cincinnati, he proved to be the most effective Cubs pitcher of the day, holding the Reds scoreless in 1⅓ innings in a 17-12 loss.  He pitched in three games in May, including one notably rough outing against the Braves on the 13th.  Jonnard started the game and gave up four runs before being replaced in the first inning by the ultimate winner, Charlie Root, who shut down Boston the rest of the way.

After a few more chances, in which Jonnard’s ERA dropped back to 3.72, he endured a disastrous appearance in long relief on June 21 against the Pirates, yielding six runs and ten hits in 6⅓ innings of a 14-3 loss at home.  Over the next month Jonnard appeared only four more times, and allowed 13 runs in 11⅔ 12 innings.  Jonnard’s final major-league appearance came on July 26 in Chicago against the Philadelphia Phillies. In three innings he gave up seven hits and four runs, and soon thereafter the Cubs sent him to Indianapolis (American Association) and acquired pitcher Ken Penner in his place.4

Although he never returned to the majors, Jonnard was not quite finished playing baseball as the 1930s began.  In the winter of 1930 he went to Cuba to play for the island’s Marianao team. In 1931 he led Cuba’s Campeonaro Unico league in complete games (four) and wins (five), but his performance wasn’t enough to earn him another chance to work at the major-league level.5

Meanwhile, Jonnard continued his career in the minors.  At Indianapolis he pitched in 34 games in 1930 and suffered a 5.70 ERA.  He remained in the American Association through 1933, with Milwaukee and Louisville, but he had difficulty keeping his ERA below 5.00.  In 1934 he dropped to the Class A Texas League, pitching for the Dallas Steers and Fort Worth Cats in that season and for Fort Worth in 1935.

By 1936 it was becoming clear that Jonnard would not get another shot at the major leagues, and he never made it out of the South, finishing his player-only days with the Galveston Buccaneers of the Texas League.  In 1938, at 40, Jonnard managed and pitched for, the Shreveport Sports in the Texas League.  He used himself sparingly on the mound, making only three appearances all season, and the team finished in the lower division despite a roster that included an assortment of future major leaguers.  Jonnard moved on to manage the Joplin Miners in the Class C Western Association in 1939, and guided the team to the playoffs before bowing to Topeka.

Between 1940 and 1942 Jonnard managed the Amarillo Gold Sox of the Class D West Texas-New Mexico League, earning Manager of the Year honors in 1940, and left only when the league disbanded on July 5, 1942, during World War II.  He did not manage again until 1947, this time with the Grand Forks (North Dakota) Chiefs of the Class C Northern League, and spent the following four years managing the Lenoir Red Sox, the New York Giants’ affiliate in the Class D Western Carolinas League.  After the team posted a record of 40-70 in 1951, Jonnard switched careers, and he began full-time scouting for the Giants.  He also moved to the Melbourne, Florida, area.

A baseball man almost to the end, Jonnard suffered a heart attack in 1957 and returned to Nashville, where he took up residence with an aunt.  Two years later, on August 27, 1959, and after suffering several cardiac complications, Jonnard died at 61 after surgery to remove a blood clot from his aorta at Nashville’s Baptist Hospital.6  He is buried at Nashville’s Mount Olivet cemetery, beneath the Jonnard family memorial.