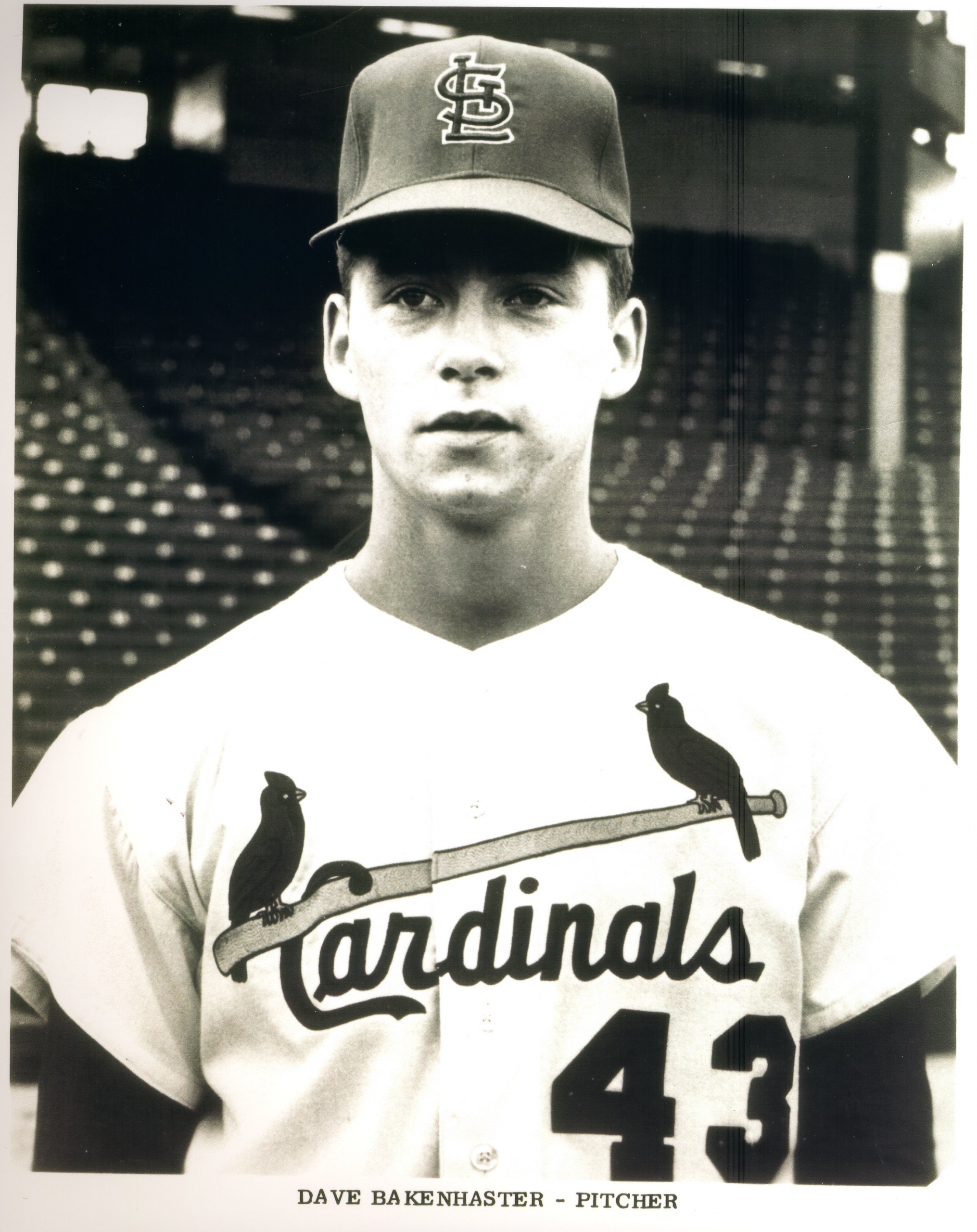 During spring training before the 1964 baseball season, a photographer for the Newspaper Enterprise Association took a picture of St. Louis Cardinals’ rookie pitcher Dave Bakenhaster side-by-side with coach Red Schoendienst. The light-hearted photo shows the two laughing, Schoendienst pointing to Bakenhaster’s name on the back of the rookie’s jersey. When the photographer put the picture on the news wires with a caption proclaiming that, despite the 11 letters in the pitcher’s name, Schoendienst maintained his record of having the “longest name on a Cardinals’ jersey,” it appeared in a number of newspapers across the country from early March into early April.1

Bakenhaster had every reason to be in good spirits that spring. The previous summer, after a spectacular high-school career in which he had thrown nine no-hitters, the Cardinals had given him an estimated $40,000 signing bonus, outbidding most of the other major-league teams for the rights to what one sportswriter called “the much-sought-after . . . whip-armed . . . pitcher.” 2 Bakenhaster was one of two first year “bonus babies” the Cardinals had that year (the other was infielder Ed Spiezio). The rules at the time required that St. Louis keep at least one of them with the big-league club and gave the team the option to designate the other as a member of the 25-man roster but assign him to a minor-league team. The Cardinals elected to take Bakenhaster north with them when they broke camp.

As it would turn out, that photograph was one of few bright moments in Bakenhaster’s major-league career. Between Opening Day that season and late July, he appeared in only two games for a total of three innings; his line for his meager appearances showed nine hits, six runs (two earned), one walk, and no strikeouts. On July 23, the day after Bakenhaster’s second and last appearance, the Cardinals sent him out, assigning him to Winnipeg in the Class A Northern League. While he persevered in the minor leagues until 1970, he never got back to the major leagues.3

David Lee Bakenhaster was born as the youngest of eight children to Monford and Lara Bakenhaster on March 5, 1945, in Columbus, Ohio.4 The family worked as crop farmers in the Dublin, Ohio, area, just outside Columbus; the land they worked at one point eventually became Don Scott Airfield, now operated by Ohio State University. 5 According to a story published at the time of his signing in 1963, his parents died in 1953, and some time after that his brother Paul became his legal guardian.6 Bakenhaster began dreaming of playing major-league ball as early as 9, and the first scouts started paying attention to him when he was 13.7

Bakenhaster was a talented athlete at Dublin High School (later renamed Dublin Coffman), lettering in basketball and baseball in all four years. He twice earned all-county honors in basketball but it was in baseball that he truly excelled.8 His catcher in high school, Craig Duffey, recalled Bakenhaster as having a superior fastball that had good movement on it. “I can remember catching games in which he was so fast, the opposing batters knees would be shaking,” Duffey said.9 He remembered that Bakenhaster once struck out all 21 batters he faced in a game against Columbus Academy in his junior year, the almost-perfect game marred by a passed ball on a third strike allowing the batter to reach first.10 In four seasons as a pitcher at the school, Bakenhaster accumulated a 41-5 record; among his nine no-hitters were two perfect games.11 During his high-school career, he averaged 15 strikeouts a game.12 In each of his four seasons, he was named to the all-county baseball team; three times he was all-district and twice all-state. 13

If scouts were already paying attention, Bakenhaster’s senior year cemented his reputation as a legitimate professional prospect. That year, when his team reeled off 21 consecutive victories to earn a spot in the Class A state finals, he went 17-0, including a four-hit victory in the regional championship and a no-hitter in the semifinals.14 Although his coach asked him to start the state championship game the day after his semifinal gem, Bakenhaster’s brother/guardian worried that taxing his arm might hurt his professional chances and so Bakenhaster skipped the game; his team lost.15 Five days after his graduation Cardinals scout Mo Mozzali signed him to a contract.16

Bakenhaster split his first professional season between Brunswick (Georgia) of the Georgia-Florida League and Winnipeg (Manitoba) of the Northern League, finishing with a combined 6-6 record, striking out 65 and walking 49 with a 4.44 earned-run average in 77 innings.17

In 1964, though bonus baby Bakenhaster began the season with the Cardinals, most observers expected that he would not do much. A preseason evaluation by Baseball Digest evaluated him this way: “Has good fastball and had a good curve at times, but has a tendency to throw too many curves. Wild at times. May have a chance.”18 And Bakenhaster indeed did little, having to wait more than two months before he saw action in a regular-season game. In that major-league debut, on June 20, 1964, Bakenhaster pitched the last two innings in a home game against the San Francisco Giants. His debut was a portent of the bad luck that followed him for most of his professional career. Entering the game with San Francisco leading 10-1, Bakenhaster allowed a leadoff double to Harvey Kuenn. He retired the next two hitters before Cardinals shortstop Jerry Buchek made an error on a ground ball by Willie Mays. Bakenhaster then allowed three consecutive singles, scoring three unearned runs. In the top of the ninth the Giants scored a fourth unearned run before Bakenhaster closed out the inning.19

More than a month later, on July 22, Bakenhaster appeared in his second and last major-league game, pitching the ninth inning of another blowout loss, this one 13-2 to the Pittsburgh Pirates. He allowed a double by Willie Stargell and a two-run home run by Bill Mazeroski to start the inning before retiring the side.20 The next day the team reassigned him to Winnipeg, recalling Spiezio to the major-league roster to protect both players from the waiver draft.

Sports columnist Fred Collins of the Winnipeg Free Press called Bakenhaster “a symbol, the innocent victim of baseball’s biggest headache, the bonus system.”22 Collins went on to defend Bakenhaster, despite his poor showing: “The crime of it is that David Lee is not a bad pitcher. No one will ever know now but it’s a good bet that, had he been allowed to develop in the minors, Bakenhaster wouldn’t have the headaches he must be having these nights.”23

After Bakenhaster’s season in Winnipeg ended in September, the Cardinals announced they were recalling him again, but it was only a technicality, since he never actually rejoined the team.24 Instead, he returned home, where he married Kim Ann Hilling on September 16, 1964. 25 (They divorced in 1968.26)

Bakenhaster earned one more bonus from the Cardinals that season: after the team won the World Series in seven games from the New York Yankees, the players voted Bakenhaster a one-fourth share of the player’s pool; it amounted to $2,155.54.27

Bakenhaster spent five more seasons in the minor leagues, all in the Cardinals’ organization, although he lost one year to military service, 1968, serving as a member of the military police in Uijongbu, Korea.28 Any prospects he may have had to advance as a professional were probably hurt that year, as he suffered a rotator cuff injury shortly after his discharge. 29 His best year as a professional was 1966, when he helped lead St. Petersburg to the Florida State League’s best record under future Hall of Fame manager Sparky Anderson; he finished the season 16-6 with a 1.90 ERA and 160 strikeouts. One of the highlights of that year was a marathon, 170-pitch complete-game 16-9 victory over Tampa in May. In that game—during which Bakenhaster reportedly lost 14 pounds over the three hours—he struck out 13, nailing down the team’s 20th consecutive win at that point.30 After he stopped playing following the 1970 season, the Cardinals offered to make him their major-league bullpen coach; he accepted, but a week later changed his mind, citing “personal reasons.” The team replaced Bakenhaster with Lee Thomas, who subsequently became the Cardinals’ director of player development and later the Philadelphia Phillies’ general manager.31

After leaving baseball, Bakenhaster worked for 34 years in a warehouse operated by Exel Logistics, serving the Nabisco Brands Food Company in Columbus, Ohio.32 In 1975 he married the former Carolyn Harr.33 In 2002 he was elected to the inaugural class for the Dublin Coffman High School Athletic Hall of Fame.34

Some years after leaving the game, Bakenhaster told a writer, “I never achieved what I really set out to do. My abilities were not as good as I thought they were. I felt sorry for myself when I first got out. But when I got my head screwed on right, I was okay.”35

2 Johnny Stewart, “Bakenhaster to Cardinals for Substantial $$ Bonus,” Undated 1963 article from Columbus (Ohio) Citizen-Journal in the archives of the National Baseball Hall of Fame and Museum.

4 Interview with Carolyn Bakenhaster, February 4, 2011. (Dave Bakenhaster declined to talk to the author of this article.)

8 Tim Saunders Interview, February 4, 2011. At the time of the interview, Saunders was in his 25th year as high school baseball coach at Bakenhaster’s old school and was also coordinator of the high school’s athletic Hall of Fame.

25 St. Louis Cardinals player questionnaire, in the archives of the National Baseball Hall of Fame and Museum.

33 Ibid. For Bakenhaster, it was a second marriage, his first one in the 1960s being short-lived.