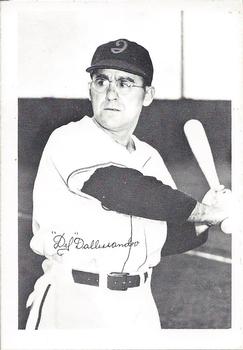 His name was Nicholas Dominic Dallessandro, but his nickname is in our databases as “Dim Dom.” Was he mentally challenged? Kind of dim? Not at all. He was vertically challenged, standing 5-feet-5, and so many newspapers referred to him as “diminutive Dom Dallessandro” that he attracted the nickname “Dim Dom Dal.”1 He was one of 10 children in his family and said they all looked alike: “When you’ve seen one of us, you’ve seen us all.” He was second tallest in the family. Apparently, his legs were unusually short, while his torso was not. The same clipping from his Hall of Fame file said he was so short “because his knees and his ankles virtually blend. From the knees up, his dimensions are normal.”2

Dallessandro was reportedly proud of his short stature, appreciating that it helped him keep his job as batboy for the Reading New York-Penn League team another year or two after he otherwise would have “graduated” — he was pitching in Junior Legion ball and serving as batboy at the same time.

Dominic was stocky, weighing in at 168 pounds. Though he stole a modest 16 bases over his eight seasons in the big leagues, the first one with the Red Sox in 1937 and the final seven all with the Chicago Cubs, he was fast enough. He lettered in track as well as baseball in high school.3

He was Italian, and his parents John and Jennie both came from Italy in 1890. Their eldest son was born in Italy; the rest of the children were born in America. Dom, born in Reading, Pennsylvania, on October 3, 1913, was the fourth of seven sons in sequence. Only on the eighth try did the Dallessandros get a daughter. John worked as an attendant in a club in New York City at the time of the 1920 census. The three eldest sons were laborers, on the railroad and at a country club. Brother Jimmy played Legion ball too, but Dom was the pro in the family — and a successful one at that, playing in 746 major-league games and 1,478 games in the minors in a career ranging from 1931 through 1952.

Baseball continued in the family; Dom’s nephew Dick Gernert remains active in the game in the early 21st century, following an 11-year career, primarily with the Boston Red Sox, from 1952 to 1962. Dallessandro was married to Gernert’s mother’s sister, Margaret.4 Was his nephew inspired by him in some way? “We used to go see him play whenever he came to Philadelphia,” remembers Gernert, who broke in with the Red Sox just five years after uncle Dom had retired from the Cubs following the 1947 season. Gernert, a 6’3” slugger and first baseman for the Sox, played both for Boston and, briefly, the Cubs — even though uncle and nephew shared the diamond more than once in 1950. After leaving the Cubs, Dallessandro played in the American Association for a few years and was with Indianapolis in 1950, the same year Dick Gernert played with Louisville.

The families apparently were not close, and divorce took them further apart in years to come. Though uncle and nephew played against each other, trading positions at the half innings, Gernert doesn’t recall talking baseball with his uncle either then or later in his career. 5

Dallessandro left Reading High School after two years — his father passed away, and so he had to quit.6 Batting and throwing left, he first played professionally at age 17. He’d pitched in sandlot ball and was considered a “great young prospect” in American Legion.7 Still, he was too good a hitter, so he switched to the outfield. Yet he only appeared in two games that first year, 1931. It was Double A ball in the International League, playing with the Jersey City Skeeters. SABR member Rod Nelson’s educated guess is that Reading Keys manager Clarence “Pants” Rowland had seen him play around town and worked out the 17-year-old Dallessandro, somehow arranging for him to appear in a couple of games for Jersey City, probably in games played at Reading.

With the Skeeters, Dom had seven at-bats, and had three base hits, one a double. He hit over .400 his second year in pro ball, too, playing in Class D ball (Inter-State League) in 1932 for the Norristown/St. Clair Saints (the team moved from Norristown to St. Clair on May 27, and then disbanded on June 12). The Reading Eagle of April 7, 1932 supports Rod Nelson’s theory; “Manager Rowland feels that Dominic Dallesandro [sic], the Reading boy. . .[is a] good prospect and gave [him] to Steve Yerkes to develop on his Class D club at Norristown.”

His first full year — his first two, actually — were with his hometown ballclub, the Reading Red Sox, the new Single A affiliate of the Boston Red Sox, working under manager Nemo Leibold. He played left field for nearly identical seasons in 1933 (137 games) and 1934 (138 games). Both years he hit 10 homers, with an overall average of .323 the first year and .332 the second. Off the field, Dom befriended an even younger Italian teammate in 1934 — Phil Cavarretta, who later played with him on the Cubs too. The 17-year-old first baseman came to the Dallessandro home for dinner once a week.8

The next two seasons were with the Syracuse Chiefs, in Double A. Leibold had made the move, too, and served as manager of the Chiefs for 1935 and part of 1936. Early in the ’35 season, Nemo said that Dallessandro “should strive to be a lead-off or No. 2 hitter in the minors because he would be batted in either one of these positions if he ever landed in the majors. Yet, there were many times during the past two years that Leibold shifted Dominic around the batting order, even to the clean-up role at times, to get the benefit of his driving power. However, Dominic is leading off for Nemo at Syracuse.”9 He hit .317 that year. In the playoffs against Newark, he had himself a 5-for-5 day, hitting two homers, a double, and two singles.

After hitting .321 for the Chiefs in 1936, Dallessandro made the majors in ’37. He appeared in 68 games with the Boston Red Sox, more than anyone other than the starters. It wasn’t an easy outfield to break into; Doc Cramer, Buster Mills, and Ben Chapman hit for a combined average over .300. Dallessandro had 175 plate appearances and supplemented his 34 base hits with 27 walks, for a .351 on-base percentage. He drove in 11 runs. April 24 was his first game, against the Yankees at Fenway Park. He pinch-hit for Lefty Grove, walked, and scored a run.

Traded for Ted Williams? The Kid from San Diego played for his hometown Padres, and owner Bill Lane had promised Boston’s Eddie Collins that when Williams was ready, he’d be offered to the Red Sox. San Diego received $20,000 or $25,000 and two players: second baseman Al Niemiec and the outfielder who took Ted’s place with the Padres: Dom Dallessandro. Williams played for the Minneapolis Millers in 1938, winning the Triple Crown in the American Association. Dallessandro hit .309 with 22 homers in 1938, then led the Pacific Coast League in 1939 with a .368 average. Coming in second was another player named Dominic — San Francisco’s Dom DiMaggio, who was named the league MVP and ticketed to start for the Red Sox in 1940. Dallessandro also led the league in bases on balls, with 92.

San Diego cashed in on Dom Dallessandro, selling him to the Chicago Cubs. The deal was done on August 15, 1939, for an undisclosed amount of cash and two players to be named later, due to report for spring training 1940. Apparently, Pants Rowland had been scouting DiMaggio, but was aghast at the price. He wired the Cubs, “You can get a better ballplayer than DiMaggio for half the money.”10

When Dallessandro reported to camp, he “made it plain that his short stature hampers him not one bit. ‘Why should it?’ he demanded. ‘I’ve got all it takes up here (he moved his shoulders and bared his powerful hands and wrists) and if I can hit in one league, I can hit in another.’”11 It was almost 10 years before Dom returned to the minors in 1948. Except for missing 1945 amid the Second World War, Dallessandro played 1940 through 1947 for the Cubs.

He was the fourth outfielder on the 1940 Cubs, but got into 107 games, hitting .268 (and collecting the first of his 22 career major-league home runs). Again, his patience at the plate paid off in terms of bases on balls. By the end of his career, he walked twice as often as he struck out; his lifetime .369 on-base percentage in the big leagues outstripped his .267 batting average by more than 100 points.

Dim Dom hit .272 in 1941, playing in 140 games. The next spring, though, he turned up on Catalina Island — where the Cubs trained in the springtime — some 20 pounds overweight. Manager Jimmie Wilson let him know that it was either lose weight or be sent to the minors. He lost weight. He also only got into 96 games, as Lou Novikoff began to come into his own in the outfield. Even as several of the Cubs left for military service, Dallessandro was a backup outfielder in 1943, getting into just 87 games (and hitting a career-low .222 against depleted pitching).

In the offseasons, like almost all players in his day, he needed extra work. After the 1942 season, he worked in a defense plant, but hurt his back. The rest of that winter and the one which followed, he worked in a gas station in Reading. In early 1944, he got the news that he himself would be spared induction, as he was classified 4-F, attributable to a head injury he’d suffered back in 1933 crashing into a wall while chasing a fly ball.12

This time, he benefited from wartime. He played in 117 games and hit .304 (with an on-base percentage of an even .400). In February 1945, Dallessandro was summoned for another physical. This time, he passed. He was ordered to report for induction on March 8. He was assigned to Fort Lewis and joined the infantry, assigned to Special Service, which primarily had him playing baseball, for most of 1945 and the first three months of 1946, discharged on April 1. (Asked by the Hall of Fame to comment on the most interesting details of his military service, he wrote back, “Nothing interested me!”)

On November 10, the Cubs released him to the Los Angeles Angels, and it was back to the Pacific Coast League. Taking Johnny Ostrowski’s place, he hit .307 for the Angels in 1948, with 21 homers.

In 1949, Dom played for three teams — the Angels, the New Orleans Pelicans, and Indianapolis, the latter two part of the Pittsburgh Pirates system. The Indians called him up after Frank “Fats” Kalin broke his hand in a street fight. In 1950 — after returning from career-threatening heart trouble13 — he played for Indianapolis again, hitting .350 to lead the American Association. After hitting .290 in ’51, he was released unconditionally in February 1952. He was working on his second marriage at the time; he’d been married in 1933 and then again in late October 1951.

Dom’s final year as a ballplayer was 1952, playing for Toledo/Charleston and Minneapolis, still hitting .295 for the season in Triple A. His lifetime minor-league average was a very healthy .322.

After baseball, he got into the printing business working as a second helper on a press for Inland Container Corp. of Indianapolis. Dallessandro died on April 29, 1988 in Indianapolis, survived by his second wife Marjorie Kirn Dallessandro, two daughters, six siblings, and five grandchildren.

In addition to the sources noted in this biography, the author also accessed Dallessandro’s player file from the National Baseball Hall of Fame, the online SABR Encyclopedia, Retrosheet.org, and Baseball-Reference.com, and the Encyclopedia of Minor League Baseball. Thanks to Rod Nelson for the suggestions regarding Reading and Rowland.

2 Unidentified news clipping in Dallessandro’s player file at the National Baseball Hall of Fame. The attribution of his height as 5’5”, instead of the more-frequently cited 5’6” is based on his obituary in The Sporting News, several contemporary newspaper clippings, and his own statement, provided when completing his player questionnaire for the Hall of Fame. Other nicknames included “Short Drawers”, “Little Dynamite”, and “Spark Plug.”