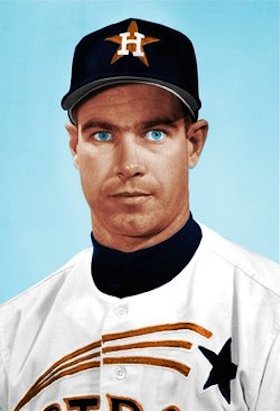 Don Bryant’s love of baseball was evident at an early age. After seeing a high-school game as a first-grader, he was hooked and he set to work constructing a baseball from tobacco twine and a bat from an old axe handle. Don, the oldest of James and Retha Bryant’s four children, was born in rural Hamilton County, Florida, between Jasper and White Spring, on July 13, 1941. While school and sports took up much of his time, Don also managed to attend barber school at age 14, and once eligible at 16½, became an apprentice. At 18, he followed in his father’s footsteps and became a master barber.

Bryant was offered a scholarship to play football at Georgia, and although his father wanted him to attend college, Don preferred baseball, and after listening to scouts from many teams, including Milwaukee, Baltimore, and Pittsburgh, his father agreed. Seventeen-year-old Donald Ray Bryant, a 6-foot-6 right-handed batter and thrower, signed with scout Bill Pierre of the Detroit Tigers in 1959. He felt fully prepared thanks to his high school coach, Don Cross, a former Giants minor leaguer, who was adamant about teaching the team fundamentals.1

Bryant had played first base in high school and on American Legion teams until one day, in need of a catcher, he volunteered and threw out three baserunners.2 Assigned to Detroit’s Class-D affiliate in Montgomery, Alabama, he was immediately struck by bad luck as he was hit in the right eye during infield practice, and for six months he could not see.3 For the next two years he battled in the low minors, moving from Montgomery to Decatur, keeping his batting average just above .200, while admittedly having trouble seeing the ball. Although his stock as a prospect may have dropped, he developed a reputation as a good game caller, including a perfect game in Decatur in 1962 by pitcher Vern Orndorff.

In 1962 Bryant had a healthy and productive year with Jamestown of the New York-Pennsylvania League, hitting .272 in 451 at-bats, and was rewarded with a promotion to Detroit’s Double-A affiliate in Knoxville. For the combined 1963 and ’64 seasons, he hit a respectable .260 in 427 at-bats. Bryant finished the 1964 season and began 1965 with Syracuse of the Triple-A International League. In midseason he was loaned to the Chicago Cubs’ Triple-A team in Salt Lake City and later recalled by Syracuse. After the season the Tigers traded him to the Cubs, who optioned him to Salt Lake City. Overall, it was a disappointing season, with Bryant batting under.200 between Syracuse and Salt Lake City.

In Tacoma of the Pacific Coast League, Chicago’s new Triple-A affiliate, for the 1966 season, Bryant started to impress. He threw out 10 of the first 14 would-be base stealers and batted .313 with an OPS (on-base average plus slugging average) of .869 in 80 games. In July the Cubs brough him up and the 24-year-old Bryant was finally in the big leagues after seven minor-league seasons. He was encouraged by his manager, Les Peden, who told him that “only the best play in the big leagues and now you’re one of them.”4 A barber in the offseason, he was missed by his teammates in Tacoma not only for his baseball skills but because he had been cutting their hair since spring training. Bryant would now bring his barbering skills to the Cubs.

But Bryant would see little playing time. After he was called up, manager Leo Durocher told him that Randy Hundley was going to break the record for games caught by a rookie.5 Bryant appeared in only 13 games for the Cubs, hitting .308 in 26 at-bats.

After a successful stint playing winter ball in Venezuela, where he was among the leading batters with a .322 average, Bryant reported to the Cubs at Scottsdale, Arizona, in 1967 as one of five catchers on the roster, including Dick Bertell, who was a sentimental favorite to make a comeback with the Cubs. Bryant was subsequently traded to the San Francisco Giants to complete the deal for Bertell. He was optioned to Phoenix of the Pacific Coast League, where he had an all-star season, hitting .292 with 7 home runs, 7 triples, and 57 RBIs in 442 at-bats, winning the team’s most-valuable-player award and a place on the Giants’ 40-man roster.

In 1968, after another solid season in the Venezuelan winter league, Bryant was optimistic going into spring training, but he was reassigned to the minor-league camp. Illness and injury took its toll in a lost 1968 season; after playing in only 46 games he was lost for the season after breaking a bone in his hand. Yet again Bryant played winter ball in Venezuela with hopes of making the Giants in 1969, but the Houston Astros, in need of a backup catcher, drafted him at the winter meetings. Mel McGaha, Houston’s first-base coach, was, not coincidentally, Don’s manager in Venezuela.

On May 1, 1969, after seeing little playing time with the Astros, Bryant was inserted into the starting lineup because primary catcher John Edwards was in a terrible slump. Don Wilson pitched a no-hitter that day with Bryant credited with calling a great game. Bryant added to the drama during the game by dropping a foul ball off the bat of Pete Rose late in the game. “The best hitter in the National League and I’d given him another chance to break up the no-hitter,” Bryant said after the game.6 Wilson rewarded his catcher with a watch to commemorate the no-hitter. The Astros followed the no-hit game with 3-1 and 4-3 victories, with Bryant contributing a home run in the latter game. Astros pitcher Larry Dierker quipped, “If he keeps this up, I’ll go better than a watch.”7

For the second time in two years, Bryant was selected in the major-league draft during the offseason ? this time by the Seattle Pilots, but he was later returned to Houston. Respected for his game-calling skill and ability to judge talent, he was asked to go to the Astros’ Double-A affiliate in Columbus (Southern League) to work with pitching prospects, including future major leaguers Ken Forsch and Larry Yount. He was recalled by Houston in May but played only sparingly until he was sent to Oklahoma City in August. He finished the year with a .208 average in 15 games with Houston.

In the offseason Bryant was purchased by the Red Sox and assigned to Louisville, where he began a friendship and professional association with manager Darrell Johnson. He joined past and future Red Sox favorites such as Jim Lonborg, Dwight Evans, Carlton Fisk, Cecil Cooper, and others over the next two years before assuming an additional role as a player-coach when the Triple-A team relocated from Louisville to Pawtucket. When Johnson asked him to coach, Bryant said he still wanted to play. Johnson bluntly told him that his playing days were numbered, but Johnson said that if he landed a big-league manager’s job he would have a coaching job for Don on his staff.8

Johnson valued Bryant’s opinion on young players, which no doubt contributed to the invitation to join his coaching staff. In 1971 Bryant was asked about Carlton Fisk. The plan was for Fisk to go back to Double-A after spring training, but Bryant thought that he was a solid receiver with a good arm and a strong bat. Johnson called Boston and asked to keep Fisk in Triple-A.9 Bryant also managed the Pawtucket Red Sox to a 6-2 record in 1973 after Johnson left following the death of his father, a season in which the Pawtucket Red Sox won the Junior World Series.

As a player, Bryant was used sparingly in Louisville and Pawtucket, appearing in 111 games over three seasons with a combined .227 batting average in 291 at-bats. Overall, his minor-league career spanned 13 seasons, and included 871 games, 3,008 plate appearances, and a .250 batting average.

In 1974 Darrell Johnson was promoted to manager of the Boston Red Sox and, true to his word, he invited Bryant to follow as bullpen coach. Aside from the job’s usual duties, Bryant often pitched batting practice. He helped Doug Griffin overcome anxiety after a Nolan Ryan beaning by purposely knocking him down during BP.10 On his first game back after the beaning, Griffin doubled and scored the winning run for the Red Sox.

The magical 1975 season and the heartbreaking (for Red Sox fans) World Series loss are well known. Bryant is proud to have been a part of the 1975 Red Sox team and especially of helping develop the great talents such as Fisk, Rice, Evans, Burleson, and Lynn who came up through the organization. When it was clear that the Red Sox needed a new second baseman because of Doug Griffin’s back problems, Bryant advocated for Denny Doyle even though the other coaches favored Tommy Helms.11 The organization listened and on June 14 the club traded to acquire Doyle from the California Angels. Bryant thought that Doyle was the missing piece to a great team.

After the ’76 season, which saw the Red Sox finish third in the division, Darrell Johnson was fired and Bryant followed him to the expansion Seattle Mariners. They both remained in Seattle until 1980, when Johnson was fired in midseason.

Bryant was hopeful for another coaching opportunity, but it didn’t materialize. Throughout his career during the offseason, he would return home and work in his father’s barbershop in St. Johns County, near Jacksonville. This time he returned home and took over his father’s shop. As of 2014 Bryant has been married for 38 years to his third wife, Judi. He thinks he got it right the third time, “If I messed up this time I’d be out – three strikes and you’re out.”12 He has a son and daughter by his second wife, Darren, born in June 1967, and Wendy born in October 1969. He also has a stepson, Darryl Taylor, following his marriage to Judi.

In 2014 Don retired from barbering. He passed away at Shands Hospital in Gainesville on January 22, 2015 at age 73 following a brief illness. He will be remembered as a quiet, kind-hearted man who stood tall, both on and off the field.

A version of this biography appeared in “’75: The Red Sox Team That Saved Baseball” (Rounder Books, 2005; SABR, 2015), edited by Bill Nowlin and Cecilia Tan.