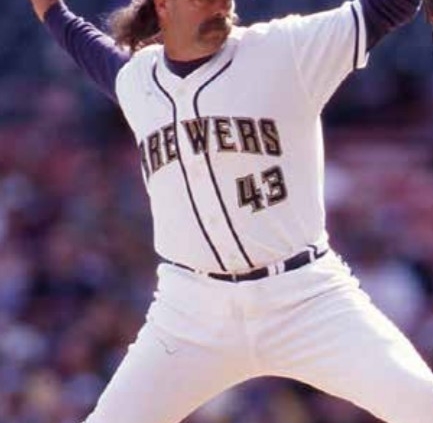 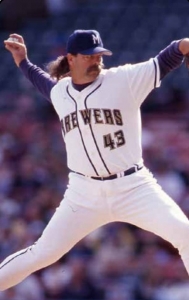 Doug Jones grew up listening to the roar of the 650-horsepower engines and watching as the drivers raced their cars around the dusty dirt tracks of the Indiana sprint-car circuit. Jones’s father was a part-time racer, and young Doug hoped to follow in his father’s tire tracks some day. When the elder Jones thought his son ready for his first taste of competitive driving, he allowed the 18-year-old to get behind the wheel in a qualifying heat at Lebanon’s Paragon Raceway. On the second lap, the rookie racer clipped the retaining wall, spun out of control, and crashed. Doug was unhurt but made up his mind to pursue a career in the somewhat safer sport of baseball.1

Douglas Reid Jones was born on June 24, 1957, in the town of Covina, in the San Gabriel Valley about 20 miles northeast of Los Angeles. His parents, Rex, a sheet-metal worker, and Hazel (Hale) Jones, relocated the family to Lebanon, Indiana, when Doug was very young. Distinguishing himself on the mound and playing center field for the Lebanon High School Tigers, Jones made the four-county Sagamore All-Conference Baseball Team as a junior in 1974.2 He pitched for a year at Butler University in Indianapolis before transferring to Central Arizona College. When he won second-team junior college All-America honors in 1977, the 6-foot-2 right-hander caught the eye of major-league scouts, and in the 1978 January draft he was selected in the third round by the Milwaukee Brewers.3 He responded by earning All-America honors again4 while pitching Central Arizona into the Arizona Community College Athletic Conference tournament with a 10-2 won-lost record in the regular season, including a six-inning, 11-0 no-hitter against Pima College.5

After the college season, the Brewers assigned Jones to their New York-Penn League farm club in Newark, New York, where he pitched 38 innings, primarily in relief, compiling a 2-4 record and a 5.21 ERA. Given a chance to start in 1979 at Class A Burlington of the Midwest League, Jones put together a so-so 10-10 record, but coupled it with a league-leading 1.75 ERA and 16 complete games in 20 starts. Jones was selected for the league’s in-season and postseason All-Star teams.

Jones worked his way up the minor-league ladder in 1980, from Stockton (Class A) to Holyoke (Double A) to Vancouver (Triple A), pitching well at each level and combing for a 14-7 won-lost record and a 2.97 ERA. His performance earned him a trip to spring training with the Brewers in 1981. He failed to make the major-league roster and split the 1981 season between Vancouver and Double-A El Paso. Jones’s 10-10 record and 4.50 ERA were deemed worthy of another look at the Brewers’ training camp in 1982.

Again Jones failed to earn a spot on the major-league roster and was returned to Vancouver, but he was almost immediately recalled when pitcher Jim Slaton was put on the 21-day disabled list with back spasms on April 3.6 Jones made his major-league debut on April 9, hurling a hitless inning of relief against the Toronto Blue Jays, but after three more games and an ERA of 10.12 he was sent back to Vancouver. Pitching most often in long relief, Jones’ posted a decent 2.97 ERA for the Brewers’ top farm club while but his won-lost record was a poor 5-8.

Amid signs that the Brewers’ were souring on his prospects, Jones spent 1983 and 1984 in Vancouver and El Paso, with little to show but a combined 7-9 record and a 4.99 ERA, mostly as a starter. In October 1984, the Brewers gave him his release.7

At 27, now married and a father, it seemed a good probability that Jones was done as a professional player. But the Cleveland Indians were desperate for pitching, and they accepted Jones’s offer to come to their spring-training camp at his own expense. After a few poor outings, Jones realized he had little to lose by experimenting with a new pitch he’d learned from former Vancouver teammate Willie Mueller, an offspeed pitch thrown without the use of his forefinger, the ball held between his thumb and remaining three fingers.8 Jones could always hit his spots with his fastball, curve, and occasional knuckleball, but the new pitch gave him a devastating changeup that threw opposing hitters off balance. In his next outing, Jones pitched three scoreless innings, and the Indians were impressed enough to sign him to a minor-league contract.

In 39 games and 116 innings at Double-A Waterbury, Jones went 9-4 with a 3.65 ERA and seven saves, and struck out 113, the fourth highest total in the Eastern League. Promoted to Triple-A Maine for 1986, Jones turned in an outstanding season. “The scouts will tell you everything Jones can’t do,” observed sportswriter Terry Pluto. “But in this, Jones’ 29th year, he … is doing a Mike Marshall imitation. Now Jones is the best reliever in the International League.”9

Nine saves and a league-best 2.09 ERA earned Jones a call-up to Cleveland on September 1. Against the Toronto Blue Jays on September 14, he relieved starter Ken Schrom with the bases loaded and one out in the ninth. Jones walked in a run but got the final two outs for his first major-league save. Twelve days later he won his first major-league game, pitching the final two innings of a 12-inning Cleveland win over the Seattle Mariners.

Jones made the Cleveland roster out of spring training in 1987, but after a disappointing April, he was again assigned to the minors. He was recalled in June and finished the season with a team-high eight saves and a 3.15 ERA.

In his first full season with Cleveland, 1988, Jones emerged as one of the league’s best closers, allowing just 69 hits (only one home run) and 16 walks in 83⅓ innings. His 37 saves, third most in the American League, for a club that won only 78 games, broke the Indians’ record of 23, set by Ernie Camacho in 1984, and his 14 consecutive saves surpassed the major-league mark of 13 just a year before by the Phillies’ Steve Bedrosian. That summer Jones was named the Indians’ lone representative to the AL All-Star team, and at season’s end placed 15th in voting for the MVP.

As he moved into the ranks of elite closers with a fastball that seldom topped the mid-80s, some nicknamed Jones “The Sultan of Slow.”10 He made the All-Star team in each of the next two seasons, saving 32 games in 1989 and a club-record 43 in 1990. His 112 saves from 1988 to 1990 for a bad Indians team trailed only the 126 gathered by Dennis Eckersley for the perennial AL champion Oakland A’s and Chicago White Sox closer Bobby Thigpen’s 125.

Jones suffered a major reversal of fortune in 1991. Starting with a game on April 24 in which he gave up a two-out, two-run, ninth-inning home run to Detroit’s Kirk Gibson in what became a 4-2 Cleveland loss, Jones went 1-4 over a stretch of 12 games with five blown saves and a 12.66 ERA. “Yes, I’m concerned,” said Cleveland skipper John McNamara. “He’s leaving the ball up over the plate and they’re not missing it.”11 “I understand what managers don’t like,” Jones responded. “They’d much rather have someone who can throw it by people and get it over with, one way or another. Those kind of pitchers will get the strikeout but be vulnerable to the home run. Someone like me, who doesn’t throw hard, can give up cheap hits and drag things out. Meanwhile the manager’s heart rate is about 100 miles per hour and his blood pressure’s going up.”12

Jones’s troubles mirrored that of the rest of the team, which lost 20 of 44 after the Gibson home run, costing McNamara his job. New manager Mike Hargrove installed Shawn Hillegas as the closer, then Steve Olin when Hillegas proved inconsistent. By July there were rumors that Jones might be traded to the Dodgers,13 but despite continuing to pitch poorly, he remained with the Indians through the rest of the season. In 36 games in 1991, Jones went 4-8 with only seven saves and a bloated 5.54 ERA.

Cleveland opted not to offer Jones a contract for 1992, making him a free agent, and he found a willing taker in the Houston Astros, who signed the 34-year-old to a three-year deal. Pitching for the first time in the National League, Jones returned to his old form and delivered one of his finest seasons. He pitched in 80 games, finishing an NL-best 70. He won a club-leading 11 games against 8 losses, saved 36, and posted an ERA of 1.85. His control was as precise as ever: He struck out 93 in 111⅔ innings while walking only 17. He made the NL All-Star team and finished 14th in MVP balloting at season’s end. He received The Sporting News’ Fireman of the Year Award.

Despite 26 saves, Jones struggled again in 1993, going 4-10, his ERA ballooning to 4.54, prompting a trade with pitcher Jeff Juden to the Phillies for World Series goat Mitch Williams. Jones made a comeback for the Phillies, saving 27 with an ERA of 2.17 in 47 games, and earning his fifth and final All-Star berth. Perhaps the highlight of his season came in Pittsburgh on May 12 when manager Jim Fregosi allowed Jones to come to the plate against the Pirates in the bottom of the eighth with the Phillies ahead by two runs. Jones lined a single to short right field for his first ML hit. Jones played six more years in the major leagues but never got another hit.

Granted his free agency for 1995, Jones signed with Baltimore and saved 22 games but with a disappointing 5.01 ERA. Again granted free agency, he was signed for 1996 by the Chicago Cubs, who released him in June  after he pitched in 28 games with only two saves. Finishing the season with the Milwaukee Brewers, who had given up on him more than a decade before, Jones then enjoyed a resurgence at age 40 in 1997. After reliever Mike Fetters missed the first month of the season will a strained hamstring,14 Jones took his place as the team’s closer and never gave it up. He finished an AL-best 73 games for the season, saving 36 in 38 opportunities and pitching to a 2.02 ERA.

Halfway through 1998, Jones was traded to the Indians for Eric Plunk, and that fall pitched in his first postseason game, the first matchup of the ALDS, throwing 2⅔ innings against the Boston Red Sox. The Indians advanced to the ALCS, but Jones was left off the roster, and after the season signed as a free agent with the Oakland A’s, for whom he pitched two seasons to close out his career at age 43, at the time the oldest player in the AL.

At the time of his retirement, Jones’s 303 career saves, all but one earned after he turned 30, ranked 12th in major-league history, and his 846 games pitched ranked 21st. His 129 saves for Cleveland, at one time the club’s all-time top total, was still good enough for third place as of 2019. Upon his eligibility for the Hall of Fame in 2006, Jones received two votes, failing to qualify for subsequent ballots.

After working as a minor-league assistant for the Arizona Diamondbacks for three seasons, Jones spent five years as the pitching coach for San Diego Christian College, helping lead the team to its first season and regional championships, plus its first trip to the NAIA World Series in 2014. In 2015 Jones was named pitching coach for the Boise Hawks, a minor-league affiliate of the Colorado Rockies. Jones and his wife, Debbie, also run a Christian music recording label, His Heart Music.