This article was written by Chuck Johnson and Chuck Boyer 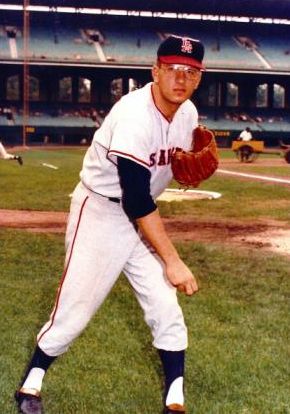 On December 6, 1960, the American League awarded Los Angeles and Washington, D.C., expansion franchises that would play in the league beginning in April 1961. With only four months to put a franchise together, Los Angeles owner Gene Autry first hired Bob Reynolds as team president and Fred Haney as general manager. When it came time to pick a field manager, their first choice was Casey Stengel, who had been fired by the New York Yankees after the 1960 season. Stengel turned down the offer but provided insight on players he thought would be of immediate help to the Angels. With just eight days to prepare for the expansion draft, the three executives took Stengel’s advice to heart, and on December 14 they chose right-handed pitcher Eli Grba of the Yankees, making him the first player ever chosen in an expansion draft and the first player in Angels history.1

A native of Chicago, Eli Grba was born on August 9, 1934. His father, Joseph Grba, left the family early on, leaving his mother, Eva, to raise her only child as a single parent. Working as a waitress during the day and a factory worker at night, she afforded Eli the opportunity to participate in sports as a child. He became a three-sport star at Bowen High School on Chicago’s South Side. “Basketball was my favorite,” Eli said, “even after I made the major leagues I played semipro in the offseason, sometimes as many as 40 games.”2

Baseball was the sport that came calling, however, as Grba’s exploits at Bowen and in summer leagues attracted the attention of Boston Red Sox scout Chuck Koney. After graduating in the spring of 1952, Grba signed with the Red Sox and was sent to play at Salisbury, North Carolina, of the Class-D North Carolina State League.

“Sheriff Robinson was my first manager,” Grba recalled. “As a matter of fact, Robinson was my manager my first three seasons in the minors.” A catcher during his 13-year minor-league playing career, Robinson was making his managerial debut with Salisbury in 1952 and, Grba said, “We just hit it off.”

Grba learned his lessons well, as he was an all-star that first season in Salisbury and again in 1953 with Corning of the Class-D Pony League, where he led the league in games started, innings pitched, and strikeouts.

After one more solid season under Robinson’s tutelage, with San Jose in 1955, the Red Sox placed Grba placed on the fast track, bypassing three levels of competition and moving him up to Triple-A San Francisco (Pacific Coast League) for 1956.

San Francisco was managed that season by Eddie Joost and then, after Joost was fired in June, future Hall of Famer Joe Gordon. Not wanting to tip the cart and upset the veteran pitchers on the staff, Joost at the start of the season dispatched Grba, the youngest full-time pitcher on the staff, to the bullpen. “I went from over 220 innings the previous two years to less than 100 (93⅓),” Grba said. “I was a starter, and I wanted to pitch.”

Grba reported to spring training in 1957 with the Red Sox but finished it with the New York Yankees. On March 14 he and outfielder Gordon Windhorn were traded to the Yankees for outfielder Bill Renna. “I hated the trade.” Grba said, “I grew up a White Sox fan and (the Yankees would) come in and beat us all the time.”

Before he could establish himself with his new team, however, another team soon came calling: the U.S. Army. With the start of the season just two weeks away, Grba tried, unsuccessfully, for a deferment. After being inducted, he was sent to Fort Jackson, in Columbia, South Carolina. He later was stationed at Fort McPherson, in Atlanta, Georgia. Over the course of the next two years, he played baseball and basketball for his base teams, and upon his discharge he reported to St. Petersburg, Florida, for spring training with the Yankees in 1959.

The Yankees sent Grba to Triple-A Richmond to start the season. Grba had gotten stronger during his Army hitch and was throwing harder, but the Yankees thought he needed a third pitch to complement his fastball and curve. In spring training coach Ralph Houk “asked what I thought I needed to get to the major leagues,” Grba said. “I never could learn a changeup, so I just said a slider.” After a brief session with minor-league pitching coach Eddie Lopat, Grba was throwing a modified slider, or cutter as it came to be called. Again Grba pitched out of the bullpen.

His work paid off, as Grba was recalled by the Yankees in July. He reported to the team at Boston’s Fenway Park, where he made his major-league debut in relief on July 10, pitching a hitless inning. The next day manager Casey Stengel sent him to the mound again, and this time he was reached for three runs (two of which scored on a wild throw) in 2⅔ innings. His first major-league start and win came eight days later in Yankee Stadium against his favorite team as a child, the White Sox. It was a 6-4 victory, and all four runs off Grba were unearned.

Grba spent the rest of the season with the Yankees, winning two games and losing five with a high 6.44 ERA. He reported to spring training in 1960 confident in his role with the team, but things didn’t go exactly as planned. “I made the team,” Grba said, “I even rode the team train back to New York.” But once in New York manager Stengel had a change of heart, and Grba was sent down to Richmond.

Grba pitched well in Richmond, going 7-1 in nine starts before being recalled in early July. He remained with the Yankees for the rest of the season, winning six games and losing four (3.68 ERA) in a mix of starting and relief roles. He was on the Yankees’ World Series roster against the Pittsburgh Pirates, although his only appearance came as a pinch-runner for Elston Howard in Game Six.

Shortly after the World Series, which the Yankees lost on Bill Mazeroski’s Game Seven walk-off home run, the Yankees advised Grba that he would be among the players they would leave unprotected in the coming expansion draft. The Angels selected Grba first overall, and in 1961 he reported to spring training in Palm Springs, California.

As the season opener approached, Angels manager Bill Rigney selected Grba to start the first game in the franchise’s history, so on the cool, windy afternoon of April 11, 1961, Grba took the mound in Baltimore in front of 37,352 fans. The Angels scored seven runs in the first two innings and went on to win, 7-2. Grba pitched a complete-game six-hitter. The weather on the East Coast at the time played havoc with the schedule; two rainouts in Baltimore were followed by another in Boston and then two more in New York before Grba’s next start, which came against his former teammates in Yankee Stadium on April 20. In his return to New York, Grba gave up a pair of homers and five RBI to Mickey Mantle as the Angels lost, 7-5.

On April 27 Grba was tabbed by Rigney to start the Angels’ home opener, against the Minnesota Twins at Wrigley Field.3 He went 6⅓ innings, allowing six hits and four runs, three on a home run by Twins catcher Earl Battey, as the Angels lost, 4-2.

Manager Bill Rigney had had enough. The Angels tried to trade Grba twice4 and finally sold him to the Hawaii Islanders of the Pacific Coast League. Grba bounced around the minor leagues for the next few years, even making the International League all-star team with Toronto in 1964, before his drinking finally forced him out of the game as a player in 1967.

“I was drinking heavy and I didn’t care about anything,” Grba said, “My priorities were all gone. Bob Lemon saw me one day and said, “I’ve never seen a pitcher lose his stuff as fast as you did.”

Grba bounced around from job to job and rehab center to rehab center until, in his words, he “hit the limit” on August 1, 1981. Living and working at a detox center in El Monte, California, he was sneaking back into his room at 2:30 A.M. when he lost his balance and fell to the floor. Realizing then how he had disappointed those closest to him – family, friends, and teammates –he decided right then that things had to change.

Grba’s sobriety also afforded him a chance to get back into the game. In 1982 he was hired as the pitching coach for the Milwaukee Brewers’ Triple-A team in Vancouver. After a year in Waterbury with the Angels’ Double-A team, Grba tried his hand at managing with Reno in the California League in 1989.

With the help of Philadelphia Phillies general manager Lee Thomas, a good friend, Grba joined the Phillies organization and spent two years with Rookie-level Princeton as manager and pitching coach. In 1993 he went to work as a scout under farm director Del Unser. He scouted for five seasons, retiring after the 1997 season.

Grba and his fourth wife, Regina, resided in Florence, Alabama, until his death at the age of 84 on January 14, 2019. He had two children from previous marriages, a son, Nick, and a daughter, Stacy, and two grandchildren. Nick spent 26 years with the Air Force, served in Iraq and Afghanistan, and retired with the rank of staff sergeant. Stacy also served overseas in the Air Force.

In 2011, the Angels celebrated their 50th anniversary as a franchise. Among the events were ceremonies honoring people who were part of Angels’ history since the beginning. The first person the Angels honored was the first player in franchise history, Eli Grba.

“What I think about sometimes is about how I messed it up,” Grba said of how he let drinking destroy his career and three marriages. “Baseball has been a secondary thought to me ever since I got sober, I didn’t leave the Angels the way I wanted.”5

For most of the 43,853 fans in attendance on April 8, 2011, Grba’s appearance was a symbolic one, but for Eli it was sentimental. “It’s nice to be recognized as the first, nice to be remembered, and it’s an honor.”

He went out to the mound and threw a strike, just as he had done 50 years earlier.

This biography appeared in "Time for Expansion Baseball" (SABR, 2018), edited by Maxwell Kates and Bill Nowlin.

In addition to the items cited in the Notes, the authors also consulted Baseball Reference.com,

Retrosheet.org, and The Sporting News via Paper of Record.

2 All quotes in this article are from the author’s phone interview with Eli Grba on December 6, 2014, emails between the author and subject on December 7, 8, 14, and 23, 2014 and an email between co-author Chuck Boyer and Eli’s niece Karen Milovich on December 17, 2014.