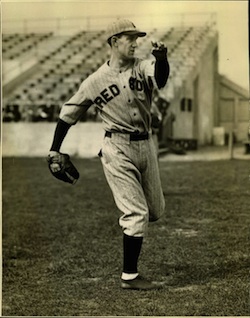 Michaels was born in Bridgeport on July 10, 1907, to Bohemian-speaking parents Joseph and Magdalena Michaels, both of whom had arrived in the United States in 1880 from what was then part of Austria-Hungary and is today the Czech Republic. The family name was Maco. Joseph Michaels was naturalized as an American citizen in 1894 and at the time of the 1920 census owned a saloon. "He was a saloon keeper right across the street from the ballpark in Bridgeport. I could sit up in the windows and watch all the games when I was a kid," he said decades later.3 Joseph and Magdalena had ten children: Stephen, William, Susie, Mary, Helen, and – the youngest at the time of the census – John. Four others followed John, and he outlived every one of the nine. In 1920 the two eldest worked as machinists in one of Bridgeport’s factories, and Susie Michaels worked as a bookkeeper in a retail store.

Michaels reported his salary as $2,750 and says he had declined to sign the contract Quinn had sent him, returning it unsigned. When Quinn asked him why he hadn't signed it, Michaels replied, "I thought I was in the big leagues."5