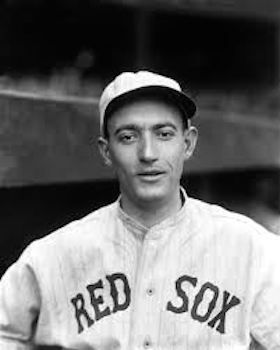 Any ballplayer named Durham is bound to attract the nickname “Bull” – even if he was a fairly average 170-pounder, standing 5-feet-11. Edward Fant Durham was a right-handed pitcher, who batted from the left side. He pitched for the two Sox teams – for the Boston Red Sox from 1929 through 1932 and for the Chicago White Sox in 1933.

Durham was born at Chester, South Carolina, on August 17, 1907. His mother, Eva Fant, married Abner Ross Durham, a farmer. The family lived in Blackstock, South Carolina. When Ed was born, he was the third child in the family. Virginia and Charley preceded him. Later Eva, Mary, William, Mildred, and Lois all were born over the years that followed. Ed went to Chester for elementary school and high school.

Not long after high school, Durham was signed to a Mobile contract. The Richmond Times Dispatch described him as “Ross Durham,” a “college hurler” – neither or which was correct, but did have him correctly as from Chester, South Carolina.1 Mobile sent Durham to play for the Meridian Mets in the Class D Cotton States League. Still 19 years old when the 1927 season began, he won the season opener against Vicksburg on April 25, 5-4. In mid-May he pitched a three-hitter against the Monroe team, and he shut out Gulfport on May 28 with a six-hitter. On August 4 Meridian traded him to the Jackson Senators (also in the Cotton States League) for first baseman Sam Leslie. It was a nice move for Durham, since Meridian finished in seventh place and Jackson won the pennant, and the playoffs. Durham’s combined regular-season league stats were 14-10 with a WHIP (walks and hits per inning pitched) of 1.164. Durham shut out Monroe, 8-0, with a five-hitter in the September 10 playoff game.

Still on a Mobile contract, Durham was optioned again to Jackson in 1928. He worked in 37 games and put up a 17-10 record. He had another three-hitter, against Hattiesburg on April 20. Jackson placed first in the standings but was eliminated in the first round of the playoffs. Durham led the league with 114 strikeouts. On September 14 the Boston Red Sox purchased Durham’s contract from Mobile.2

As the Red Sox train headed south to spring training at Bradenton, Florida, Durham joined it at Columbia, South Carolina. He showed well in spring training, throwing three innings of no-hit ball against the first-string Red Sox team in his first start, on March 9. Boston was looking forward to a team that might get the club out of its perennial spot in the cellar of the American League. The Red Sox had finished in last place four years in a row, and in six of the seven prior seasons. This year, the Boston Globe wrote, “Red Sox Start Most Promising Team in Years.”3 Melville Webb, in that article, mentioned Ed Carroll and Ed Durham as “two youngsters who have shown signs of being worthy of careful development.”

Durham made his debut in the majors in the second game of the 1929 season, April 19 in Washington. Starter Ed Morris gave up three runs in seven innings, and bore the 3-1 loss. Durham pitched the bottom of the eighth, struck out one and gave up one base hit, an infield hit. Washington’s Walter Johnson got the win. His second time out, against the Philadelphia Athletics on the 28th, Durham gave up two runs in two innings, and then he really got hammered on May 1, banged around for six runs by the Athletics in 3? innings of mop-up work. It was the sixth inning that really did him in; he allowed a single to every one of the first five batters. He could take some consolation in that he wasn’t the only Red Sox pitcher hit hard that day. Starter Milt Gaston lasted only an inning and a third and gave up eight runs. Relievers Bill Bayne and Ed Carroll followed Durham and each gave up five runs. The final score was 24-6 Athletics.

The six-run beating wasn’t Durham’s only one in May. It happened twice more, on May 22 and May 26, in just one-third of an inning on the 22nd against the Athletics and in two-thirds of an inning on the 26th against the New York Yankees. By the end of May, Durham had an earned-run average of 17.25. Though he stuck with the Red Sox for the first half of June, he was optioned to Pittsfield on June 15.

Playing in the Single A Eastern League for the new Red Sox farm club, the Pittsfield Hillies, Durham put up mediocre numbers (he was 8-8 with a 4.82 ERA) but he did get called back up to Boston in September. He finished stronger, certainly helping his own cause with a no-hitter, 10-0, over Albany on September 1. When the Eastern League season was over (Pittsfield finished fourth in the eight-team league), Durham was one of five players called up.

After his recall, Durham pitched in five games, four in late September and one in October, without giving up an earned run. His standout game was the last one of the season, on October 6 in Washington. Durham got the start and worked six innings, allowing just two hits (and one unearned run due to an error by catcher Ed Connolly). The Red Sox won the game, 2-1, and Durham finished the season with a record of 1-0 in the big leagues.

On December 21, 1929, Durham married Ellen Brice Kennedy, from Blackstock, South Carolina. Her father was president of the Bank of Blackstock. Durham’s father was more than the “farmer” described in the US census; he was “one of this section’s big planters.”4

After three years in which manager Bill Carrigan was unable to get the Red Sox out of last place, Carrigan retired again and returned to Maine. Heinie Wagner became the new Sox skipper for 1930. Durham looked good in spring training. He picked up his first win on May 16 against the Yankees, working the top of the ninth inning and seeing his teammates push across the winning run in the bottom of the inning. Four days later Durham relieved in the third in another game against New York and gave up just one hit and no runs through the ninth, but weakened in the top of the 10th, giving up three runs and losing. He lost his next four decisions, too. His August 14 game was his best of the season, a four-hit shutout of the St. Louis Browns. It was a disappointing season both for Durham and the Red Sox; the team finished in last place again, 50 games out of first place (52-102). Durham had 12 starts and relieved in 21 games; he was 4-15 with a 4.69 ERA, just the slightest notch worse than the team’s 4.68 ERA.

Shano Collins was hired as the manager for 1931. Durham won games on May 10 and July 15, but those were the only two he’d won before things seemed to come together for him with a five-inning relief stint against the Browns on August 12. He won that game, then was given a start on the 16th and pitched a complete-game, five-hit, 5-1 win over the White Sox. On August 29 he won a 3-1 game against Washington. He lost a 2-0 game on September 4, but threw two shutouts on September 12 and 21. Durham finished 8-10 with a 4.25 ERA. The Red Sox finished in sixth place, with 10 more wins than in 1930. Durham may have overestimated his ability with the bat. After hitting .098 in 1930, he’d bet fellow pitcher Wilcy Moore that he’d make more hits in 1931. When the season was over, Moore had nine but Durham had only three (.056). It was a substantial bet – reflecting his nickname, the wager was for the price of a good bull.5

When one looks at his earned-run average from year to year, Durham improved every one of the four years he was with the Red Sox, and 1932 was his best year yet – a 3.80 ERA. His won/loss record was 6-13, slightly better than the team’s .279 winning percentage (43-111). Manager Collins resigned and was replaced by Marty McManus about a third of the way through the season. Durham’s best game was his 2-1 complete-game win over the White Sox on July 28. And Durham won $50 from Wilcy Moore, collecting seven hits to Moore’s one.6

The 1933 White Sox and Red Sox battled for sixth place, and the White Sox won. Durham had a winning record (10-6), starting 21 games and finishing tied with Ted Lyons and Sad Sam Jones for the team lead in wins. His ERA was 4.48. It was his last year in baseball. He joined the White Sox for spring training in 1934 and stuck with them all spring, but never pitched, sent on April 11 to Chicago to try to find a clue “as to the character of the many miseries which have kept the South Carolinian from doing any pitching this spring.”7 They were arm troubles (toward the end of the 1933 season, he’d found it difficult to lift his arm) and they didn’t get better. On May 26 Durham filed for voluntary retirement. A report in June said he’d been diagnosed with “lesion of the arm muscles” and the prescription was for him to spend the summer rowing a boat.8

Durham wasn’t able to pitch in 1935, either, but in December he was reinstated and placed back on the active list. He said he was ready to pitch in 1936.9 He worked out, but wasn’t doing well and returned home, promising he would return in time for the season, but the White Sox had had enough of paying Durham’s medical bills (a doctor treating him said “there is nothing physically wrong”) and elected instead to let him go.10 Still hedging their bets, they optioned Durham to Dallas, though the Dallas Morning News reckoned him a “wild gamble,” given his recent track record.11 No records indicate that he ever pitched for Dallas, or anyone else, from 1934 forward.

For 25 years, Durham ran the Ed Durham Service Station at Blackstock, South Carolina, where he died (in Chester) after an illness, at the age of 68 on April 27, 1976. He left his wife, Ellen, and a son, Edward F. Durham Jr.