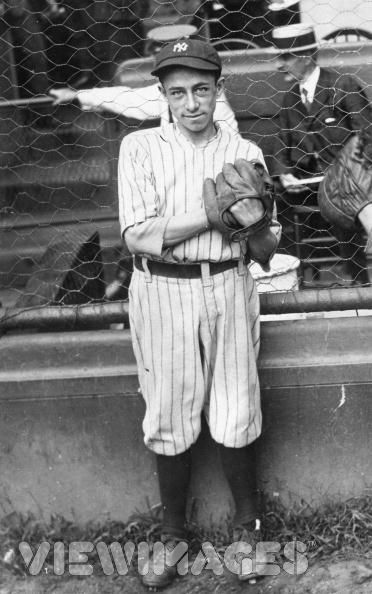 Any objective summary of Eddie Bennett’s contributions to baseball makes him seem at best a minor figure in the game’s history. Yet during the 1920s and early 1930s, his evident devotion for the game made him a powerful symbol to many fans. Although his time in the limelight was brief, there are signs that he has not been entirely forgotten.

Eddie was born in Flatbush section of Brooklyn in 1903; any chance at a career in baseball appeared over after an accident during infancy left him with a serious spinal injury. The life of the handicapped youngster was further blighted when both of his parents died in the 1918 influenza epidemic.

In 1919 Bennett’s fortunes took a dramatic turn for the better when he attended a Yankees game at the Polo Grounds. Happy Felsch, center fielder of the visiting White Sox, noticed Eddie’s smile and, sharing the superstitions of many ballplayers of the era, told teammates that “a hunchback should be lucky for him.”1 When Felsch did indeed have a good day, he and Eddie Cicotte persuaded manager Kid Gleason to hire Eddie as a batboy and unofficial mascot.

It seems most likely that these events occurred during a July 30 doubleheader, if we are to believe later accounts that the White Sox lost the first game but then rebounded in the second game. But the details don’t match exactly and there is no contemporary documentation, so Bennett’s first appearance in a major-league dugout may well have taken place on a different date.

It’s equally unclear how long he remained with the White Sox. Sportswriter Westbrook Pegler reported in 1926 that the White Sox collected $200 for Bennett at the end of the 1919 Black Sox World Series.2 But SABR researchers Jack Kavanagh and Norman Macht have noted that he does not appear in any team photos or in photos of the World Series, and suggested that Bennett probably remained with the club for only a couple of 1919 regular-season series.3

After the White Sox lost that fall’s World Series, and Felsch and Cicotte were subsequently banned for life for their role in the resulting scandal, it seemed natural to assume that Eddie Bennett’s stint in baseball had ended almost before it had begun. Instead, Bennett began to frequent Ebbets Field in 1920, and one of the Brooklyn Robins players decided that he would be a good-luck charm.

The Robins won that year’s pennant and faced Cleveland in a best-of-nine World Series. The first three games were played at Ebbets Field, and the Robins pulled out two of them. But then the series moved to Cleveland for four games, and Eddie Bennett was left behind in Brooklyn. After the Indians won four straight games to capture the championship, fingers were pointed. Bennett, it was said, had been distraught over being left behind and had put a curse on the Robins, resulting in the team’s collapse.4

This version of events may have helped Bennett gain employment as the Yankees’ mascot and batboy in 1921. While mascots and batboys had been part of baseball since the 1880s, including such notable ones as Charles “Victory“ Faust, there had never been one quite like Eddie. He remained in that dual role for almost 12 years and saw the Yankees capture seven pennants and four World Series titles.

During that time, Bennett became perhaps the best-known batboy in baseball history. As Joseph Herzberg later wrote, he “was No. 1 man, the envy of the kids, who wondered why Eddie got paid for what they considered a rare and wondrous privilege, not only of seeing a ball game free every day but of sitting on the same bench and rubbing shoulders with Ruth, Gehrig … and all the rest of the mighty men of Yankee Stadium.”5

Yet although he was the envy of many, it was impossible to begrudge Bennett his good fortune. This was not only because of his handicap, but also because he immersed himself in his duties with such single-mindedness. Bennett, as Westbrook Pegler explained, “raised the job of bat boy from a summer pastime to a solemn and responsible business.”6

Perhaps it was precisely because Eddie Bennett had no thought of hogging the limelight that he became a minor celebrity in his own right. Westbook Pegler noted in 1932: “Eddie’s picture has shown in all the papers at one time or another in the last 13 years and stories have been written around and about him on many a rainy day.”7

In almost 12 years as Yankees batboy, during which he aged from a teenager to a man of nearly 30, he never showed any sign that he viewed his job with any less reverence than the young fans who envied him. He lived with evident joy and with his heart on his sleeve, just as they would have done in his place. And, as Pegler observed, he never for a moment lost sight of the reality that the players were the show, and that his was a supporting role: “There are about 100 bats to be kept straight and counted and watched in Eddie’s job, and of course he isn’t required to carry this cord of wood onto the field and off, but only to mind his business, keep out of gossip and arguments, and mind the clubs.”8

Eddie was always the first to shake the hand of a Yankees slugger after a home run and he became integral to the rituals of many players. Ace relief pitcher Wilcy Moore insisted that Bennett catch his first warm-up toss, and many of the players allowed nobody else to handle their bats, even after Eddie was given an assistant.

One of Bennett’s closest relationships was with Babe Ruth. According to Herzberg, “Ruth used to make laughs for early comers at the Stadium by having a game of catch with Eddie. They would start ten feet or so apart, tossing the ball to each other. Ruth then would throw it about a foot above the reach of the stumpy mascot. Eddie would dutifully chase the ball, and Ruth would heave it again just high enough to elude Eddie’s fingers. Eddie would jabber angrily at the Babe, who would stare back in wide-eyed innocence, only to throw the ball over Eddie’s head once more and keep throwing it over his head until Eddie was backed up against the screen behind home plate.”9

This seems cruel to modern sensibilities, but the affection between the two men was mutual and genuine. Bennett doted on the Babe and knelt alongside him in the on-deck circle before each at-bat. He never missed an opportunity to run an errand for Ruth, such as bringing the great slugger regular dollops of bicarbonate of soda.

Ruth seems to have been just as fond of Eddie Bennett. After first meeting his future wife, Claire, it was Bennett whom he entrusted to deliver an admiring note. One of the batboy’s most treasured possessions was a baseball that had been signed by Ruth, upon which Eddie had inscribed, “This was the last ball pitched in the 1921 World Series.”

They were, Westbrook Pegler noted, “the two orphans on the Yankee ball club who made the baseball bat their weapon in life and achieved a lot of glory, each in his own way”10 And as their rapport in the on-deck circle suggested, the two men also seemed to share a deeper bond: both retained a childlike ability to openly show their emotions. Many men wished to be Babe Ruth, but Bennett was one of the few who felt no self-consciousness about his admiration for the Babe. And perhaps Ruth saw Bennett and realized that, had fate treated him differently, he might well be in the batboy’s shoes.

Another kindred spirit was pitcher Urban Shocker. When Shocker returned to the Yankees in 1925, he was unable to sleep lying down because of a serious mitral valve disorder. But the pitcher was unwilling to let any of his teammates know about his condition, so he roomed on the road with Eddie Bennett. No doubt the two men felt a special bond as a result of their respective disabilities.

Shocker died in 1928 and the next year Bennett lost another valued compatriot with the passing of longtime Yankee skipper Miller Huggins. Bennett’s emotional attachment to the Yankees was nowhere better symbolized than by Huggins’ death. While few members of the team were grief-stricken by the passing of the crusty manager, Bennett wept unashamedly throughout the evening after learning the news.

Perhaps with the passing of two close associates, Eddie Bennett sensed that his glorious run was drawing to a close. On May 19, 1932, he was hit by a taxicab and suffered a broken leg. The injury healed slowly, and he had to watch the World Series on crutches. By the following spring it was clear that he would not recover fully, and so he relinquished the job that he had loved so dearly. Yankee owner Jacob Ruppert continued to support Bennett financially, but Eddie was unable to find anything to take the place of his beloved role at Yankee Stadium.

He began drinking heavily to ease the pain from his injuries and, after a three-week bout of especially heavy drinking, died of alcoholism in his rented room on January 16, 1935. He was surrounded by memories of his glory days: “[T]he walls were covered with autographed pictures of ballplayers. Piled everywhere were gloves, bats, score cards, clippings of stories of ball games. He had a drawer full of signed baseballs.”11 Two of the centerpieces were the Ruth baseball and a team photo of the 1928 world champions with Eddie front and center.

Eddie had no known relatives, so the Yankees paid for his funeral and his burial at St. John’s Cemetery in Queens. Ruth was still abroad on a tour that had begun in Japan and unable to attend, nor did any other ballplayers. But the entire Yankees office staff, including Paul Krichell, Mark Roth, George Perry, Gene McCann, and Charlie McManus, was on hand to pay final respects to the team’s loyal mascot and batboy.

The decades since Eddie Bennett’s passing have naturally dimmed memories of him, but there are those who still remember him and they do so with genuine fondness. Legendary investor Warren Buffett used three paragraphs of his 2002 annual report to stockholders to explain why Eddie Bennett was his “managerial model.” After recapping Bennett’s career, Buffett concluded, “What does this have to do with management? It’s simple – to be a winner, work with winners. In 1927, for example, Eddie received $700 for the one-eighth World Series share voted him by the legendary Yankee team of Ruth and Gehrig. This sum, which Eddie earned by working only four days (because New York swept the Series) was roughly equal to the full-year pay then earned by batboys who worked with regular associates.”12

The message, Buffett explained, was as simple and straightforward as the unassuming way in which Bennett went about his business: “Eddie understood that how he lugged bats was unimportant; what counted instead was hooking up with the cream of those on the playing field. I’ve learned from Eddie. At Berkshire [Hathaway], I regularly hand bats to many of the heaviest hitters in American business.”13

Westbrook Pegler may have given the best concise summary of Eddie Bennett’s appeal when he wrote: “Eddie Just Minds Bats and His Own Business.” Who better than Warren Buffett to grasp that this was Eddie Bennett’s essence and use it as a model for his own approach?

An updated version of this biography appears in “Scandal on the South Side: The 1919 Chicago White Sox” (SABR, 2015). Click here for more information or to order the book.

Herzberg, Joseph, “Eddie Bennett, 31, Passes in His Room From Alcoholism; His Luck Credited for Championships as Much as Ruth’s Hits; Envy of Boy Fans,” New York Herald Tribune, January 18, 1935.