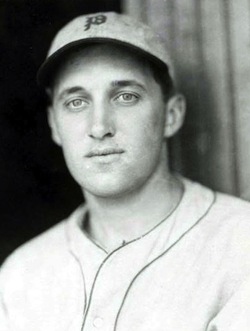 Sandusky or Terre Haute? 1888 or 1890, or maybe 1891? Tracing the birthplace of outfielder Elmer Miller, who played seven seasons in the major leagues for the Cardinals, Yankees, and Red Sox, is not the easiest of tasks. Standard sources consulted in 2012 claim he was born on July 28, 1890 in Sandusky, Ohio. That he died on November 28, 1944 in Beloit, Wisconsin is borne out by his obituary in the Beloit Daily News, and by his state of Wisconsin death certificate. Both documents claim he was born in Terre Haute on July 28, 1888.

It wasn’t uncommon for ballplayers to shave a year or two off their age, to appear more attractive to teams that might offer them a contract, so perhaps 1888 was his true year of birth even though he was listed as a child of 1890. A handful of unattributed newspaper clippings in his Hall of Fame player file cite 1891 as his birth year. But was he a Hoosier or a Buckeye? Accounts differ.

The closest we can come to authoritative information is courtesy of the 1910 United States census, which shows an Elmer Miller in Sandusky, a toolmaker of age 22, residing with his mother, Elizabeth, and his older sister Catherine, 24, who worked in sales at a cigar stand. The census states that both Elmer and his mother were born in Indiana (her parents had both come from what we today call Northern Ireland). Elmer’s death certificate names his mother as Elizabeth Fitzpatrick Miller and his father as Edward Miller, also a Hoosier by birth (but no longer with the family, and perhaps no longer alive, in 1910).

When all this evidence is weighed, our best estimate is that Elmer was born in 1888 in Terre Haute, but raised in Sandusky. Sources seem to agree he had a playing weight of 175 pounds and was an even six feet tall, perhaps an inch shorter. He is said to have played semipro baseball in 1910, but began his professional career with the Duluth White Sox, a Minnesota-Wisconsin League team, in 1911. He was drafted by the Cincinnati Reds and hit over .300, according to a biographical “birthday sketch” in his player file at the National Baseball Hall of Fame. The Reds let him go, however, releasing Miller on waivers to the Fort Wayne club. The St. Louis Cardinals paid the waiver price on April 23, 1912, and quickly put Miller to work.

He played his first major leagues game on April 26, 1912. It was a 10-8 victory over the Cubs in Chicago; Miller played left field, batted second in the order, and went 2-for-5 — two singles — scoring two runs. His production sputtered after that; in the first 12 of his 413 big-league games he was just 7-for-37 (.189). The Cardinals released him to Binghamton in May, brought him back in June and then released him to Duluth later that same month.

He split the 1913 season between the Duluth White Sox (by 1913 it was a Class C team in the Northern League), and hit .347 in 91 games (and was listed as a catcher for the only time in his career; this may be an error). In midseason he joined the Mobile Sea Gulls (Class A, Southern League). Miller struggled against stronger pitching, hitting .235 in 30 games, but he stuck with the Sea Gulls in 1914, by hiking his batting average to .263. He was solid by 1915, hitting .326 over the course of 129 games. The Cardinals retained his option at the start of 1915, but on July 23 the New York Yankees purchased his contract for a reported $4,000, and Miller was scheduled to report to New York on September 1, after the end of the Southern League season. His American League debut was not impressive; he batted just .145, with only one double among his dozen hits.

Nonetheless, Miller played for New York in each of the next three seasons. He spent much of 1916 with the International League’s Baltimore Orioles, hitting .338 in 308 at-bats, and was called back to New York on July 28 to fill Ray Caldwell’s place on the big club’s roster. (Caldwell was “failing to keep in condition” – a euphemism for struggling with alcoholism.)1 He stayed with the Yankees the rest of the season, appearing in 43 games, hitting at a .224 pace, and contributing with 18 RBIs.

In 1917, as one of six unrelated Millers playing in the major leagues, Elmer achieved his peak success in top company. He appeared in 114 games, his career high, and hit .251 in 379 at-bats. He was patient at the plate, drawing 40 bases on balls and boosting his on-base percentage to .336. He scored 43 runs and drove in 35.

The Yankees played only 123 games in 1918, since the season was curtailed in early September because of the World War. Miller had been exempted from service in August 1917 because he had two dependents – his wife and a child.2 He had married Vera Watson of Superior, Wisconsin in 1914. The two had met when Elmer was playing for Duluth. They eventually had three daughters – Irene, Joyce, and Elsie.3

Miller appeared in 67 games for the Yankees, hitting .243 and driving in 22. There were three games in which he drove in a pair of runs, and each time those two runs made a difference in a Yankees victory: the 2-1 win over Washington on April 27, a June 22, 5-3 contest against Washington, and a 6-4 win against the White Sox on July 9.

He was a right-handed hitter and thrower, and ended his career with a .960 fielding percentage. His primary position was center field.

Still, those performances weren’t enough to keep Elmer Miller in the Bronx. He spent 1919 and 1920 with the St. Paul Saints in the American Association, although he was still in contract with the Yankees. Unusual side deals regarding player contracts were not uncommon at the time. He hit .314 in 1919 (with 15 homers) and .333 in 1920. In 1921, after hitting .313 with 18 home runs in half a season at St. Paul, he earned a ticket back to the majors, and was brought back to New York in a June 30, three-way trade, which also involved the Red Sox. He played his first game with the Yankees on August 7, driving in the second of the runs in a 2-0 win over the White Sox. The game was halted after five innings by a downpour that left the field “a regular lake.”4

Miller played out the rest of the 1921 campaign, hitting .298. It was an auspicious time for him to resurface with the Yankees. Fellow outfielder Babe Ruth hit for a .378 average and banged out 59 homers, leading the team to its first pennant (Miller contributed four). In the World Series against the Giants, Miller appeared in every game of the best-of-nine series. The Giants prevailed, five games to three. Miller had been feeble at bat, hitting .161 with one run batted in.

In 1922, Miller was carrying a .267 average, with three homers and 18 RBIs when the Yankees traded him to the Red Sox as part of a six-player deal (accompanied by a reported $50,000 for Sox owner Harry Frazee). Miller, Chick Fewster, Johnny Mitchell, Lefty O’Doul and the cash went to the Red Sox in exchange for Joe Dugan and another Elmer, Elmer Smith. Dugan had been the prize the Yankees had sought, and American League president, Ban Johnson – no friend of Frazee – had promptly spoken out to criticize the trade. “Deals of this sort in midseason are regrettable and must be discouraged and legislated against,” he declared. 5

As late as February 10, 1923, the Red Sox had still not offered Miller a contract for the coming season, and he said he might just leave the game. He’d been offered a five-year contract by a semipro club, the Beloit Fairies, and was mulling that over.6 On March 3, he announced that he would take the offer in Wisconsin and retire from organized ball.

When the contract with Beloit, a “team which was not in good standing,” was complete, he was reinstated by Commissioner Landis and signed with Boston again in January, 1928.7 Through a series of transactions, he was also signed to the Portland Beavers and the San Francisco Missions in 1928, and the Louisville club in 1929, but he never played for any of them. Instead, Miller and his family moved to Fairmont, Minnesota, and he managed the local team there for 1928 and 1929. He later worked as a salesman of oil and gas. He returned to Beloit in 1942, and worked in the Navy building for Fairbanks Morse & Co. He was treated for coronary problems over the next two years but continued to work. On the morning of November 28, 1944, he simply never got out of bed. The cause of death recorded was coronary occlusion.

7 The phrasing comes from an unattributed January 1929 clipping in Miller’s Hall of Fame player file.