This article was written by David Raglin and Barb Mantegani 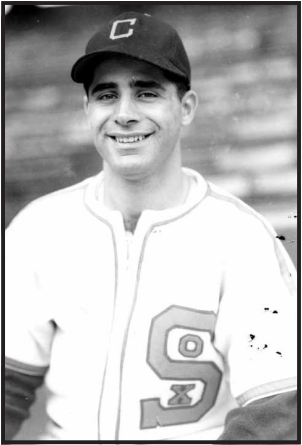 Vince Castino, a catcher who played for the Chicago White Sox from 1943 through 1945, had a long career in professional baseball despite his short stint in the majors. Castino was a first-generation Italian American, born on October 11, 1917, in Willisville, Illinois, southeast of St. Louis, to Caetano Castino and Lina (Gallo) Castino. Castino grew up in Chicago and graduated from Crane Tech High School, where he lettered in baseball.

Castino signed his first professional contract with the Portsmouth (Ohio) Pirates of the Class-C Middle Atlantic League right after graduating from high school in May of 1936. Despite boasting a 20-year-old Eddie Stanky, the Pirates finished dead last in the eight-team league with a 40-88 record. The young Castino was not on the team long, getting into only 10 games and going 4-for-21, all singles, before being released on July 6.

Castino signed with the Eau Claire Bears of the Class-D Northern League in late May of 1937 and put up some good numbers, playing in 32 games and hitting .318 in 107 at-bats, but the Bears released him in late July. Castino then hooked up with the Moline Plow Boys of the Class-B Three-I League late in the season. He started the 1938 season as property of the Plow Boys but still did not get any game time before being sent back to Eau Claire in early May.

Castino finally got a chance to play regularly in Eau Claire in 1938. He appeared in 115 games for the Bears, hitting .255, and given Eau Claire’s last-place record of 39-84, it is not surprising that Castino was the only member of the club ever to play in the major leagues. Castino returned to Eau Claire in 1939 but was released in August. He signed with league rival Grand Forks and finished the season with the Chiefs. After the season, he was selected and subsequently released by St. Paul of the Double-A American Association.

At this point, things started changing for Castino. First, he got married to Wanda (no maiden name available) on February 15, 1940. Two months later, he signed a contract with the Lubbock Hubbers of the Class-D West TexasNew Mexico League. He played parts of the next three seasons for the Hubbers, along with the Waterloo Hawks of the Class-B Three-I League in 1940, the Wilmington (Delaware) Blue Rocks of the Class-B Interstate League in 1941, and the Norfolk Tars of the Class-B Piedmont League in 1942. Right after returning from Wilmington, Castino was suspended for two months by Lubbock in 1941, for reasons we do not know today. Still, 1942 was a better season for Castino.

Not only did he hit .375 for the Hubbers in 1942, but he was named player-manager on May 13 of that year. The manager had been Monty Stratton, the pitcher whose right leg was amputated in 1938 after a hunting accident. Stratton said that because of the artificial leg he could not handle the rigors of managing. (Stratton later returned to pitch in the minors and became the subject of a 1949 movie, The Stratton Story, in which he was played by Jimmy Stewart.)

The West Texas-New Mexico League folded after the 1942 season, making Castino a free agent. He signed with the White Sox in February 1943. Lubbock had been a White Sox farm club so the team was already familiar with him. Castino started the 1943 season with the St. Paul Saints of the American Association, but was recalled by the White Sox on June 22.

Castino made his major-league debut two days later, in the second game of a doubleheader in St. Louis. He went 1-for-4, scoring a run and knocking in two (one on a bases-loaded walk).

A month later, Castino had his biggest game in the big leagues and the moment he called his biggest thrill.1 The White Sox were up 1-0 against the Boston Red Sox in the fourth, but a walk to Luke Appling, a single by Ralph Hodgin, and a walk to Joe Kuhel loaded the bases. Castino deposited the second pitch from Dick Newsome into the screen above the left-field wall and the White Sox were suddenly up 5-0 in a game they won, 5-1. That was one of only four grand slams in the American League in 1943 (the others: Joe Gordon of New York, Rudy York of Detroit, and Frank Skaff of Philadelphia).

Castino’s other major-league home run came on August 15, 1943, as the second of back-to-back home runs (the first being by Kuhel) off the Yankees’ Marius Russo to break a 2-2 tie in the seventh inning of a game the White Sox eventually won 4-3. On August 21 Castino scored from second on a Wally Moses single with two outs in the ninth in the White Sox’ 5-4 walk-off win.

Castino played in 33 games for the White Sox in 1943, coming to the plate 113 times. He had two home runs (the only ones of his major-league career), 16 runs batted in, and a .228 batting average. It was Castino’s most active big-league season. Later that fall he participated in a game played in Seneca, Illinois, that gave shipbuilders working on the war effort the opportunity to see big-league ballplayers in action.

Castino was exempt from the military draft because he had a 4-F status, so he was free to play baseball. In 1944 he was with the White Sox all season, but got up to the plate only 90 times, with no home runs and three runs batted in to go with a .231 average. However, he was part of an historic event on Saturday, April 29, 1944. The usually terrible St. Louis Browns had started the season 9-0 on the way to their only American League pennant. The Browns were up 3-2 in the bottom of the eighth when Mike Tresh singled and Castino, sent up as a pinchhitter for pitcher Gordon Maltzberger, laced a double to drive in Tresh with the tying run. The White Sox got another run in the bottom of the ninth to win the game, 4-3, and ended the Browns’ undefeated start to the season.

Castino tallied the eventual winning run on June 25, 1944, against the Indians when he scored from second base on Skeeter Webb’s sixth-inning double. On the negative side, his throwing error in the bottom of the ninth on July 2, 1944, handed the Yankees a 7-6 victory. Back on the positive side, Castino went 3-for-3 and drove in the tying run on August 12, 1944, in a game Chicago eventually lost to Boston, 5-4.

The year 1945 started on a down note for Castino. His divorce from Wanda was granted on January 26, 1945. The grounds for the divorce were desertion, as the pleadings claimed that she had left him on September 26, 1943. Castino was examined again by his draft board but remained classified 4-F, physically unfit for military service. He was with Chicago all of the 1945 season but played in only 26 games and batted only 39 times. He did not start a game behind the plate. (Mike Tresh caught 150 games for the White Sox.) Castino drove in four runs and hit .222 in his final major-league season.

Castino went to the White Sox camp in 1946 but was sold to the Toledo Mud Hens of the Triple-A American Association that spring. He hit .163 for the Mud Hens and was optioned to the Class-A Elmira Pioneers, with whom he finished the season, hitting .203. Castino split the 1947 season between Toledo, Elmira, and the San Antonio Missions of the Double-A Texas League.

The 1948 season was another turning point for Castino, as he joined the Sacramento Solons. The move only returned him to Triple-A, it brought him to the place where he would live for the rest of his life. He played in 85 games for Sacramento and spent the whole season with the club, the first time that had happened in his minor-league career. One of Castino’s fellow catchers on the Solons was one of the greatest catchers in history, Ernie Lombardi. Castino’s only home run that season was a big one, a grand slam against the Hollywood Stars in the seventh inning of a 10-8 win. The slam lengthened the Solons’ lead from 3-2 to 7-2, but the Stars came back with six in the bottom of the seventh. Sacramento countered with three in the top of the eighth to take back the lead. Sacramento finished last in the Pacific Coast League with a 75-113 record. That summer Castino was one of five players who struck out against Betty Evans, a star women’s softball pitcher in Portland, Oregon, in an exhibition before a PCL game. Four other players did manage to get the bat on the ball.

The season was capped by Castino’s marriage to Lois Jeanne Imholz on November 19, 1948, a marriage that lasted the rest of Castino’s life.

Castino went to camp with Sacramento in 1949 but was sold to the Beaumont Exporters of the Double-A Texas League on April 3, 1949. He spent the whole 1949 season with Beaumont, playing in 84 games. The Exporters finished last in the league with a 55-97 record.

Sacramento purchased Castino back from Beaumont on January 19, 1950, but after only six games, the Solons sent him to the Little Rock Travelers of the Double-A Southern Association. He played in 33 games for the Travelers, but after a dispute with club officials, he was optioned to the Amarillo Gold Sox of the Class D West Texas-New Mexico League, the same circuit where he had managed and played for the Lubbock Hubbers early in his career. He finished the season there, playing 41 games for the Gold Sox.

Castino split his final season in pro ball between the Colorado Springs Sky Sox of the Class-A Western League and the Fargo-Moorhead Twins of the Class C-Northern League. Castino had his final big moment in a game against the Aberdeen Pheasants. Fargo-Moorhead was down 7-6 going into the ninth inning. Castino led off the ninth with a single and scored after a triple by Bill Rapacki that in reality was a single that took an odd hop past an outfielder.

Castino retired from Organized Baseball after the 1951 season but stayed active in the game for the rest of his life. He caught for the Oroville Olives of the Sacramento Valley League from 1952 to 1954, the same years that he was instructor at the Bee-KFBK Baseball School (the “Bee” was the Sacramento Bee newspaper.) He played in an old-timer’s game between the Solons and the San Francisco Seals on August 28, 1954. He scouted for the Solons, was active in youth baseball, and was a regular guest at area baseball dinners such as the annual Woodbridge Country Club event. He was also a district manager in the Bee’s circulation department for 13 years.

On March 6, 1967, Castino died of lung cancer in Sacramento at the age of 49 and was interred at St. Mary’s Catholic Cemetery in Sacramento.